I got a few bulbs of allium nectaroscordum from a flower shop (as it was written on the tag). Tell me, what is this plant? Does he have other species, and are there any peculiarities of growing? 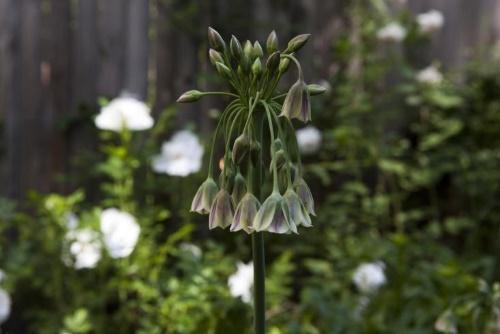 Allium nectaroscordum is an ambiguous plant and disputes over its belonging to this or that family are ongoing today. Some scientists argue that this is a type of onion (allium), others are convinced that nectarcordum is a separate genus from the lily family, and still others classify it as a lily family.

Only one thing can be said with certainty: nectaroscordum is a perennial, herbaceous and bulbous plant that has several varieties of its own..

Outwardly, nectaroscordum resembles an onion, and its root system is also presented in the form of a rounded bulb without rhizomes. Narrow elongated leaves grow from it. Peduncles are also high, up to 1.5 m, but can be of different lengths. At their top, small drooping bells of pale color form a loose umbrella in the shape of a ball. The inflorescences are quite large, the diameter of each bell can reach up to 1.5 cm, and there are from 10 to 30 of them in the umbrella. At the end of flowering, boxes with seeds ripen in their place..

The leaves of such an allium have a characteristic onion-garlic smell, which is revealed in full force when touched..

The following forms of nectar corpus are distinguished into certain species:

Nectaroscordum prefers sunny places, but it will not disappear in partial shade. The soil loves loose and fertile, it is not demanding in care, the main thing is not to flood the beds, otherwise the bulbs will begin to rot.

In regions with severe winters, it requires shelter for the winter, but, in general, has a high winter hardiness.

The flower propagates by sowing seeds or by daughter bulbs. Seeds are sown in early autumn on a seedling bed, and transplanted to a permanent place in the next season. Old, heavily overgrown bulbous nests are divided in the fall, after the leaves die off.