Tell me, will variegated oxalis grow in open ground? This amazing bush was brought to me by my husband from a business trip. The first year he lived in the house and grew significantly in size. True, he did not become taller, but he “got fat” and no longer fits in the pot. She divided the plant and planted a couple in the garden. All have taken root and are already blooming. Will oxalis survive the winter on the street? 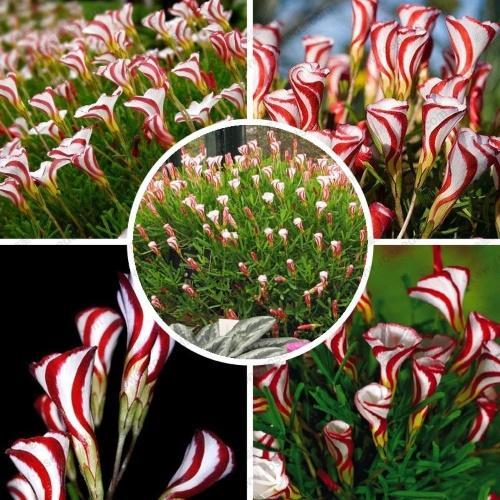 Did you know that some plants look more like a delicious candy or ice cream than a flower? The variegated oxalis is one of the most amazing cultures. Despite the modest size of the bush itself, it amazes attention with its original flowering and bright two-tone color. What is this crumb and is it difficult to grow it? 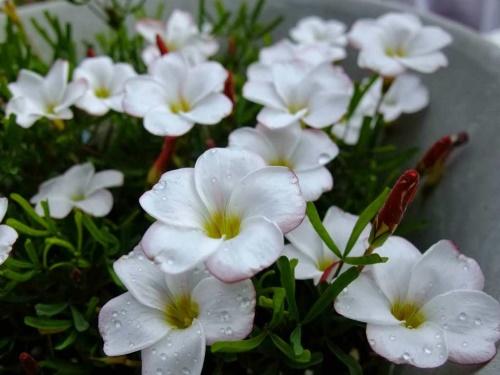 The variegated oxalis is not at all like its sisters from the oxalis family. So, if the leaves of the common sour cherry resemble clover, then in the variegated they are thin and oblong. The length of a bright green leaf is on average about 2 cm, while it looks like a narrow strip folded in half. The root system of a plant consists of tubers that spread horizontally and give new shoots. So the bush turns out to be lush, while its height does not exceed 15 cm. 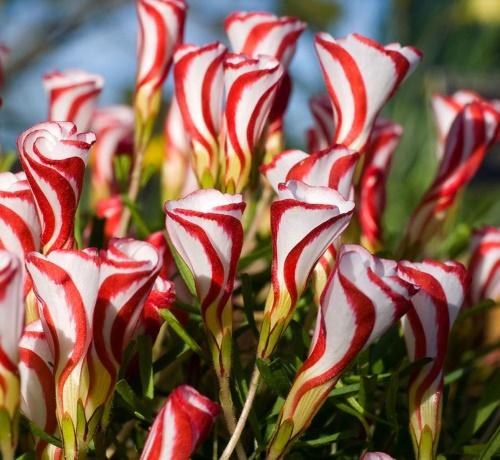 The “highlight” of the species is its flowering. An open flower, when viewed from above, has nothing special: 5 white petals and a narrowed “neck”, like a gramophone. However, when it is closed, it becomes clear why the acid is called that. The reverse side of the white petals is surrounded by a bright red border, and they close in a spiral. When closed, the flowers look like striped caramel or a cone with ice cream, poured over cherry jam.

It is interesting that the buds open only under the sun’s rays, and close again in the evening..

Variegated oxalis – agricultural technology and the secrets of successful cultivation 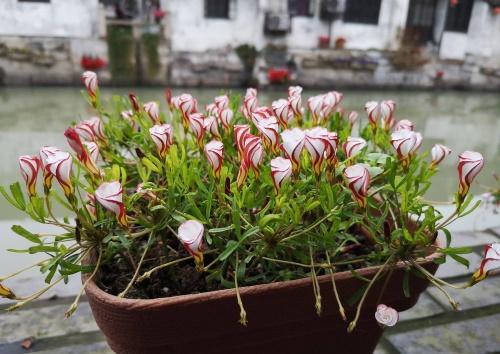 Oxalis is propagated by seeds, but most often by tubers. Originally from distant Africa, she feels good outdoors. True, on condition of shading from direct sunlight and only before the onset of a cold snap. It will not be able to winter on the street and will freeze out, therefore, as a street plant, it can only be grown as an annual.

However, oxalis can rarely be found in flower beds, since both seeds and tubers, and even more so a bush, are pretty decent. If it grows on the street, it is mostly in pots with a mandatory “move” to the house for the winter.

But at home, the miniature and bright acid is very comfortable. She loves the soil slightly acidified and nutritious, so it is advisable to mix deciduous soil with peat. And so that the soil passes water well, add a little sand. It is better to put the pot on a window with diffused lighting..

Sour acid care has some features:

In winter, you need to find a cool room with a temperature of 11-14 ° C. Although she is African, she does not like the heat, especially in combination with dry air during the heating season. In the spring, it will be possible to return it to a warm room again or put it outside, placing it in partial shade..