We grow intoxicating dope in the country: planting methods, nuances of care and photo varieties

A neighbor gave a cone of dope, I want to plant it under the window in the spring. Please tell us in a nutshell about Datura flowers and the peculiarities of planting and caring for them (with a photo, if possible). Do I need to grow seedlings and where the plant will like it best – in the sun or in partial shade? 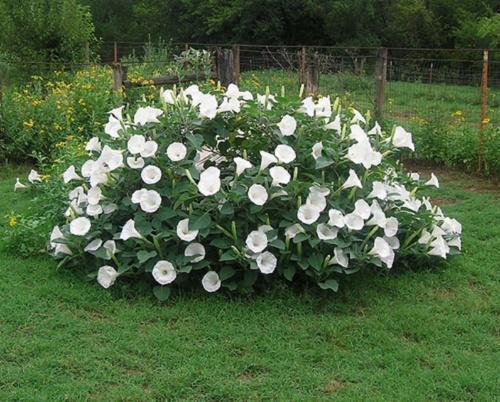 In some countries, the spreading Datura bushes grow freely in the wild and are even considered a weed, but their unique flowering deserves a different fate. In our area, dope flowers, with photos, planting and caring for which we will get to know better today, are widely used to decorate the site. They look good in a single planting and are great in group compositions, and large, but delicate inflorescences immediately focus on themselves. But let’s talk about everything in order.. 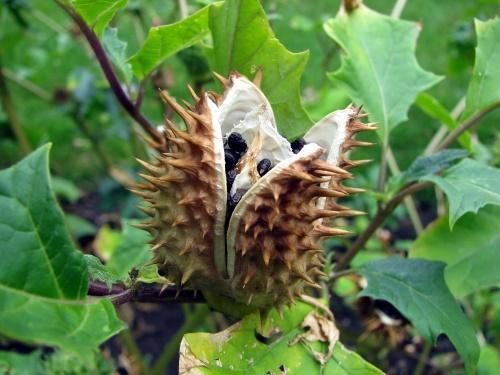 Datura grass – this is also often called this herb, but it has nothing in common with grass: a flower grows into a powerful bush or, more correctly, a bush up to 1.5 m in height, while the crown diameter often exceeds it. True, its bluish shoots are not covered with bark, as in ordinary bushy crops, but remain as juicy, although very durable. The root system of the plant is also very powerful and not everyone can pull out an adult bush by hand. Datura leaves, painted in a gray-green color, at a young age are almost the same as those of eggplants, but over time, the leaf plate greatly increases in size.

In the middle of summer, huge bells begin to bloom on the bushes. They bloom at night and live only until the morning, but the abundance of buds allows you to admire them until mid-autumn. The inflorescences give off a sweet sugary aroma, and their color depends on the variety. Most often, you can find two types of dope:

At the end of flowering, seed pods are tied, similar to chestnuts with their numerous spines and a rounded shape, but inside they have many sections with small seeds..

All parts of Datura are poisonous: when ingested, they can cause hallucinations and even mental disturbances.. 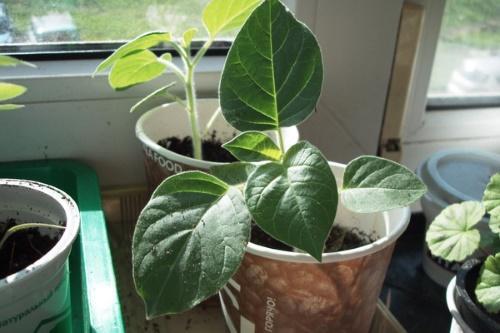 Datura by its nature is a perennial plant, however, it does not survive our winters in the open field, therefore it is grown as a garden annual. Datura planting can be done in two ways:

Seeds must first be filled with hot water and floated hollow specimens discarded.

Datura is quite capable of growing without human intervention, but some care measures still do not interfere with flowering more abundant and longer. These include:

Some gardeners dig up a bush for the winter, plant it in a pot and bring it indoors. In this case, you need to cut the shoots in the fall, forming the crown.