How to care for an aucuba

They gave me a young aucuba, no more than two years old. Recently, I began to notice that the bush somehow wilted and did not grow. It seems to me that I am not looking after her quite correctly. Tell me what kind of care an aucuba needs at home? 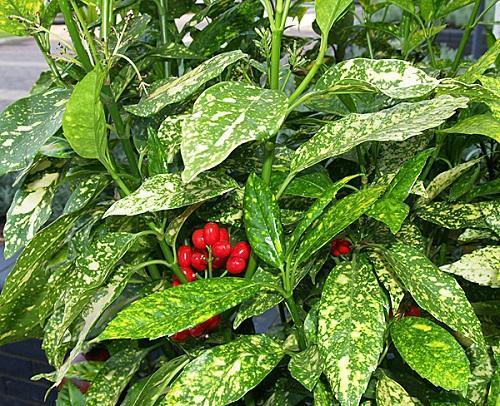 Among the decorative deciduous plants, it is worth highlighting the aucuba – an evergreen shrub native to the subtropics. A powerful bushy flower grows up to 5 meters in nature and has several varieties. At home, Japanese aucuba is most often grown. It is also quite tall, although smaller than its wild relatives – the bush grows to a maximum of 1.5 m in height.

The main decoration of the aucuba are large leaves that cover the bush in abundance. They have a very unusual color: golden spots of various sizes, from small dots to yellow circles, appear on a bright green background. Glossy long leaves in the sun seem to gleam with gold, for which the aucuba was nicknamed “the golden tree”. During flowering, the plant releases small panicles with small inflorescences, which are lost against the background of luxurious foliage. However, when bright red fruits are formed in their place, slightly similar to barberry, this serves as the final touch in the decorativeness of the aucuba..

In nature, the aucuba is able to survive where other plants die, since the bush is completely unpretentious. As for caring for aucuba at home, then when creating habitat conditions close to natural ones, the flower will not cause much trouble..

The main criteria for adequate Aucuba care are:

The plant needs to select such a soil so that nutrients and water during irrigation can easily reach the root system, and at the same time the moisture does not stagnate in the flowerpot..

The best option for growing aucuba is a soil mixture consisting of:

The presence of a drainage layer in the pot is a prerequisite for planting a plant.

Features of lighting and temperature conditions 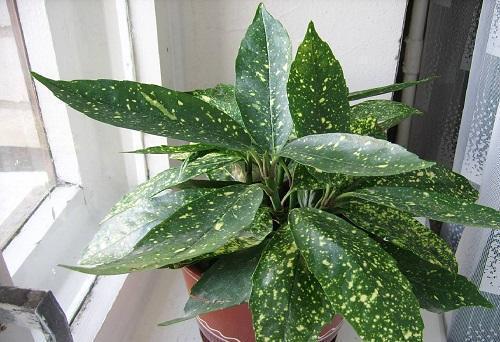 In principle, the aucuba does not need bright lighting and tolerates well even darkened places. But so that its varieties do not lose their decorative appearance, you still need to listen to the recommendations of flower growers:

Regardless of the variety, direct sunlight is contraindicated in aucube.

The comfortable temperature in the flower room in the summer is about 20 degrees Celsius, but in winter the flowerpot should be moved to a cooler room (no more than 14 degrees) so that the plant does not lose its foliage.

Aucuba loves moisture very much, especially in summer. The next watering should be done as soon as the soil in the pot dries out from above. In the warm season, the flower can be sprayed occasionally to wash the dust from the leaves..

In winter, when the air in the apartment is dry and the temperature is low, it is necessary to spray the flower more often, but at the same time it is enough to water the aucuba once every one and a half weeks..

The frequency of feeding and replanting

Like all indoor flowers, aucuba should only be fertilized in spring and summer using a compound fertilizer. 3 dressings per month are enough.

Young bushes must be replanted annually in spring, changing the soil and flowerpot. At the same time, they must be pinched to stimulate the emergence of new shoots and form a lush bush. For large plants in large pots, it is sufficient to renew the top layer of the substrate..

Video about the features of caring for Japanese aucuba