A neighbor brought me a dozen Jerusalem artichoke “potatoes”. He highly praises its taste and medicinal properties. I also decided to try to grow this plant in the country. Tell me what an earthen pear (Jerusalem artichoke) is and how to grow it?

Earthen pear (Jerusalem artichoke) is very well known among admirers of traditional medicine. It is used to treat and prevent a wide range of diseases.. 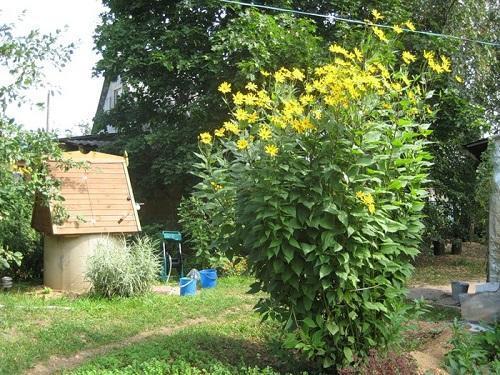 The earthen pear belongs to the Asteraceae family, it is a tuberous perennial. It has a developed root system that can penetrate into the soil to a depth of 30 cm. At the beginning of autumn, tubers with a thin peel ripen on the shoots that are underground. Due to their decent depth, they can withstand severe frosts in winter and do not dry out in dry summers. The size and color of the tubers is not the same, and new shoots appear on them in the spring.. 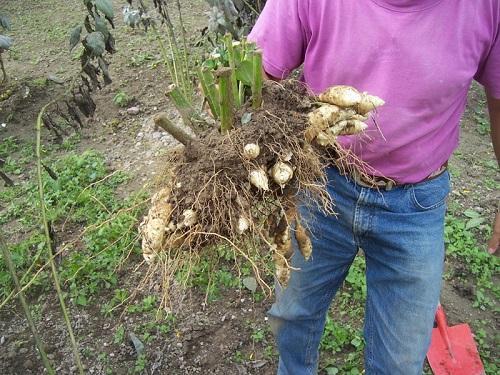 From an adult Jerusalem artichoke bush, you can get up to 1 bucket of tubers, and Jerusalem artichoke sometimes reaches a height of 5 meters. The stems of the plant are covered with hairs, rough to the touch, it blooms in single baskets with dark tubular flowers, in which yellow tongues are visible, while it gives very few seeds.

Jerusalem artichoke can grow in one place for up to 30 years without additional fertilizing. Unlike potatoes, the Colorado potato beetle does not like to feast on them.. 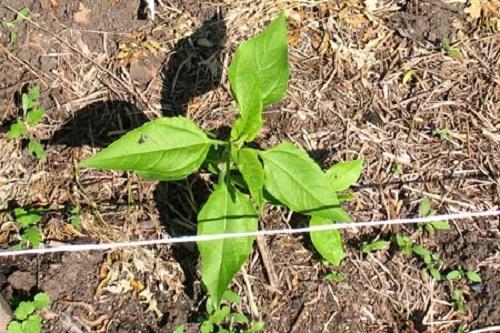 To grow earthen pears, tubers or eyes are used. From the eyes, you first need to get seedlings by planting them in pots. In open ground, Jerusalem artichoke is best planted in late autumn, so that the plant rises early. However, tubers dug up in the fall (after potatoes) are slightly bitter. It is better to leave them to overwinter in the ground, and in the spring they will pick up sweetness and be ready to eat.. 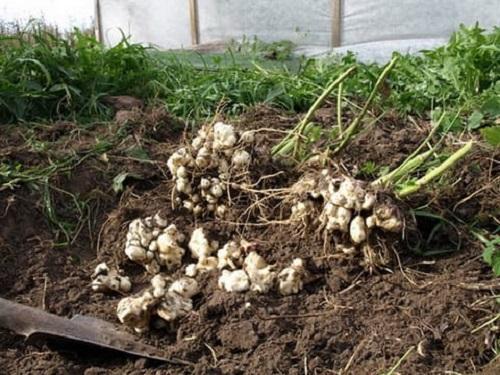 When harvesting, the stems and leaves are not thrown away – they can be used to prepare medicine or use as silage.

Some gardeners plant the bulb in the spring after the potato. To do this, make holes with a distance of 50 cm between them, add ash (1 tbsp.), Sand (a quarter of a bucket) and compost (half a bucket) to each. The row spacing is at least 70 cm. Whole tubers are used for planting, but you can cut them into pieces. 10 sq.m. you will need about 15 kg of tubers.

Put dried tubers in water before planting and leave for 2 days.

When lateral shoots appear, when the plant reaches 50 cm in height, they must be removed. One of the strongest stems is left on the bush. When it grows twice, you need to water it well, you can also fertilize it with humus.

Taking into account the far from small “growth” of Jerusalem artichoke, it is good to plant it around the perimeter of the garden. This will protect other crops from the wind and create a unique hedge.. 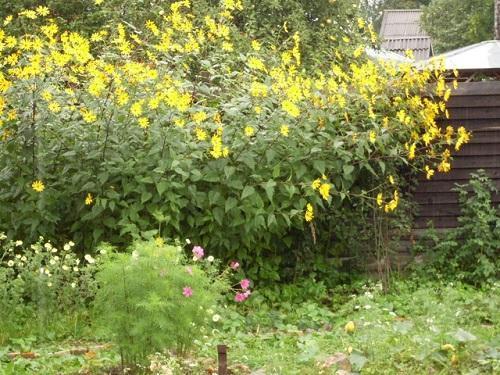 To increase the yield 2 weeks before digging out the tubers, the stems are recommended to be mowed.

Care for young plantings of an earthen pear is almost the same as that of a potato. In the future, it is enough to remove weeds, loosen the soil around and feed a little:

Useful properties of Jerusalem artichoke and recommendations for growing – video