How to save an orchid without roots – ways and important nuances

Tell me how to save an orchid without roots? My husband gave it to me for my birthday last year. Recently I was on a business trip for 2 weeks, and he looked after the flowers and, probably, filled them. When I returned, the leaves of the orchid sagged, I took them out of the pot, and all the roots of it rotted. Is there anything you can do? 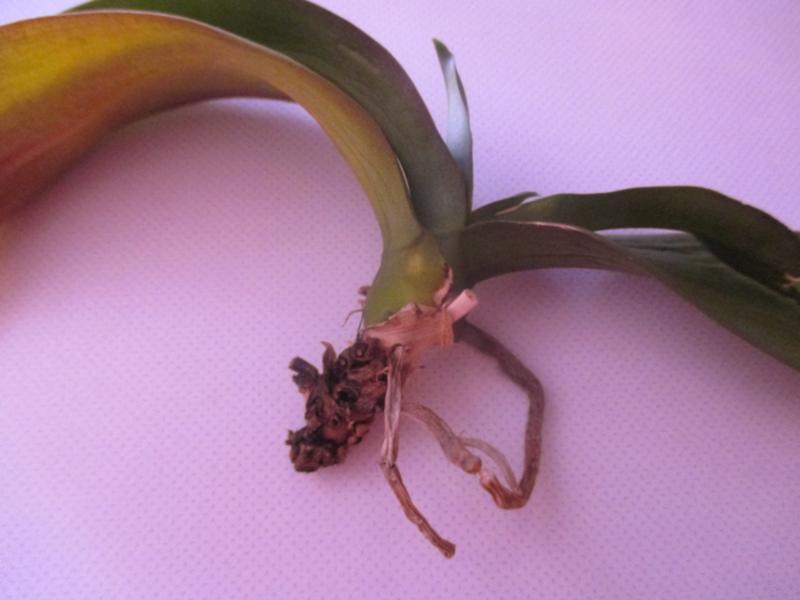 In most indoor flowers, after the loss of roots, the aerial part also dies, but the orchid is distinguished by increased “vitality”. Even when there is only one stem left in the pot, you can revive the plant if you know how to save an orchid without roots. The first step is to establish the cause of the misfortune that happened to her and remove or change this factor. So that the decay process does not go further, into a deciduous outlet, the orchid should be thoroughly cleaned and all affected tissues removed. And then – just create conditions for the flower in which it will quickly resume losses and grow new roots..

Why does an orchid lose roots 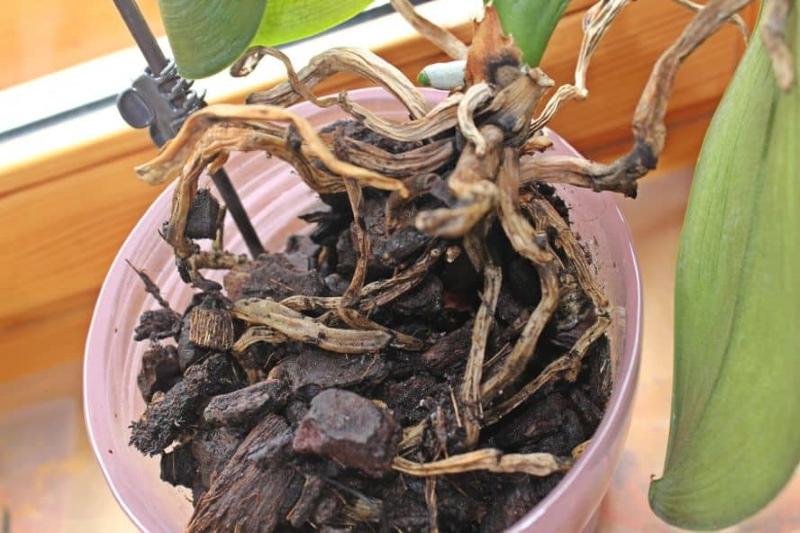 There may be several reasons why a flower begins to lose its root system: 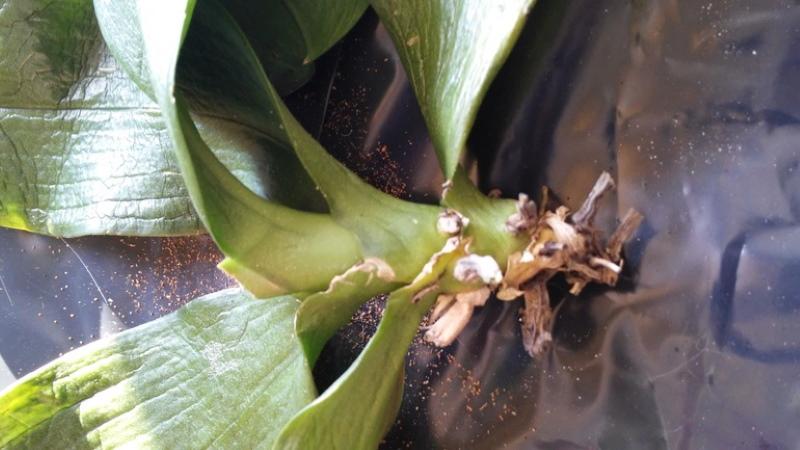 Without this stage, all further manipulations will be useless. It is necessary to clean up all the affected areas by cutting off the rotten roots and even part of the outlet, if the rot has already managed to go there.

After stripping, the orchid must be dried, leaving it on the table for a couple of hours. And cover all the places of the cuts with crushed activated carbon or wood ash. After that, in order to accelerate root formation, the remainder of the socket is placed for an hour in a solution of a growth stimulator.

How to save an orchid without roots – two ways 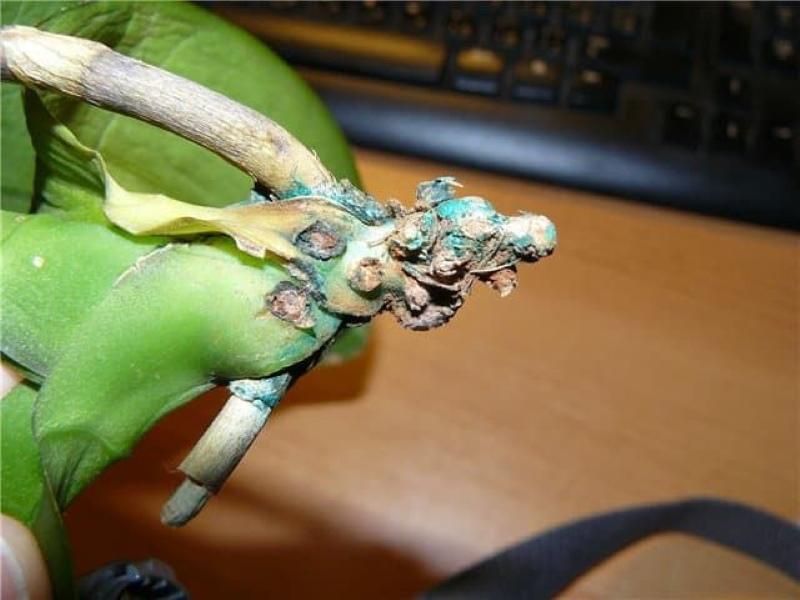 You can revive a flower in water or in a greenhouse. It all depends on how dire the situation is. If the roots are all gone, it is better to organize greenhouse conditions for phalaenopsis, with high humidity and a stable above-zero temperature. If you have a couple of live roots or large remains intact by rot, you can do without it. In any case, the flower grows new roots for a long time and sometimes this process takes almost a year..

Reanimation of an orchid in a greenhouse 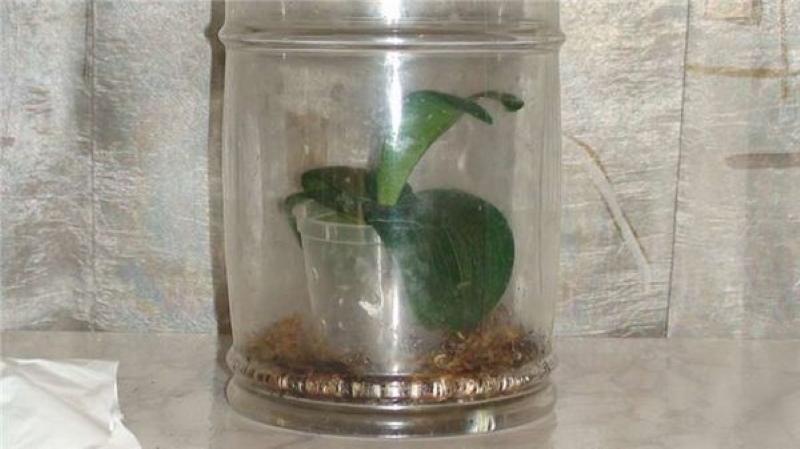 The method excludes direct contact of the outlet with water, but provides for stable humidity and temperature. A greenhouse can be an aquarium, a plastic container with a lid, or bottles. Expanded clay is poured at the bottom, and a layer of wet sphagnum moss is laid on top. It is in it that the orchid is placed and the greenhouse is closed..

The temperature in the greenhouse should be at 23 ° C. Lower values ​​will only provoke further decay. And in the heat, the leaves will begin to dehydrate and the flower will not have the strength to build up roots..

The greenhouse should be ventilated, and the orchid should be fed every 10 days with potassium-phosphorus fertilizer. Also, iron chelate is added twice a week and once a month – Epin.

Features of growing roots in water 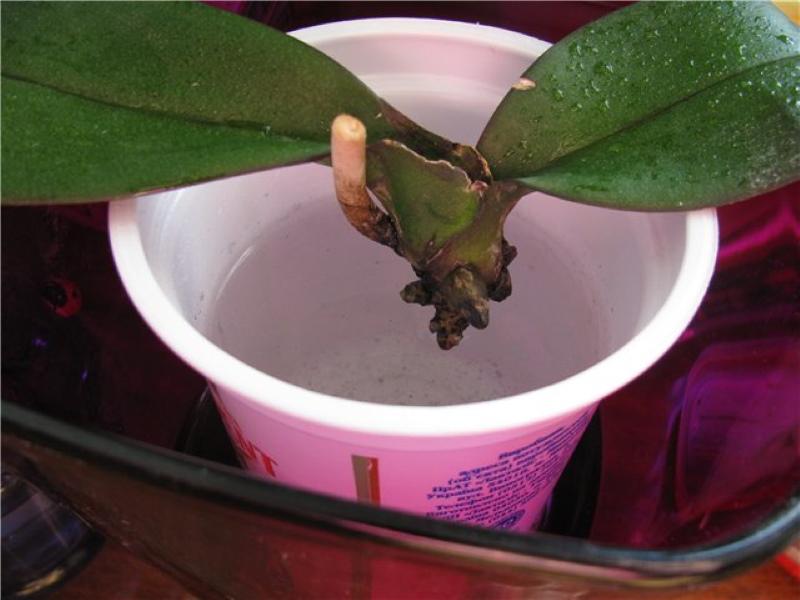 Out-of-greenhouse resuscitation includes the same procedures as growing roots in a greenhouse. However, in this case, not the entire outlet is placed in the water, but only the tip, where the roots are formed. And only for 6 hours, then taking a break for the same time.