Tell us what this miracle is – a bearded carnation? The seeds were given by a friend, she said, you can sow directly into the ground and the bush will bloom beautifully. I did just that, not all ascended, but there are a dozen plants. But now the summer is over, and they are not going to bloom, just green leaves. Maybe the seeds turned out to be wrong or should it be? When will she give buds? 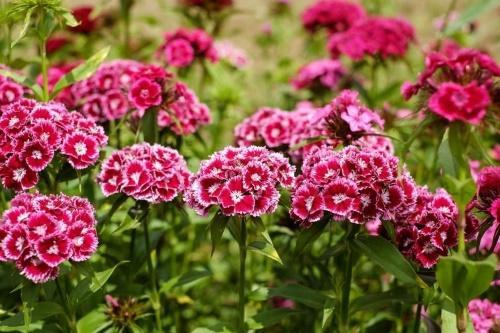 At the beginning of summer, when the spring flowers have already wilted, and the summer flowers are still just tying the buds, the bearded carnation blooms. Its flowers, although small, are collected in lush inflorescences and are painted in bright colors. Against the background of a still green flower bed, the bushes look gorgeous, besides, they spread a delicate sweet aroma around. What is this culture and is it difficult to grow it?

The scientific name of the flower is dianthus barbatus, but it is better known as the Turkish carnation. She was nicknamed bearded for long bracts..

Bearded carnation – description of the species 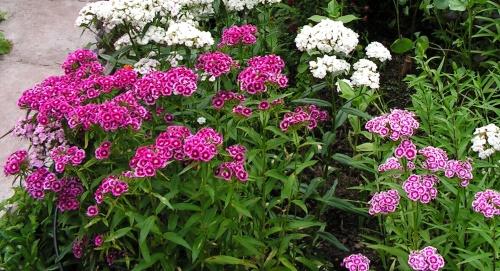 One of the most beloved varieties of dianthus belongs to the clove family. This is a very beautiful and compact plant in the form of a lush bush, whose average height is about 40 cm.There are taller varieties, reaching 60 cm.Fans of miniature flowers will like dwarf hybrids only 15 cm tall.

The bush consists of erect stems, on which lanceolate leaves are located opposite. In spring and summer, they are green, and by autumn they acquire a reddish tint. In June, lush corymbose inflorescences up to 12 cm in diameter form at the top of the stems. They consist of small but brightly colored flowers. The bearded carnation will delight you not only with simple and double flowers, but also with a wide palette of their colors.. These can be both plain and multi-colored types: 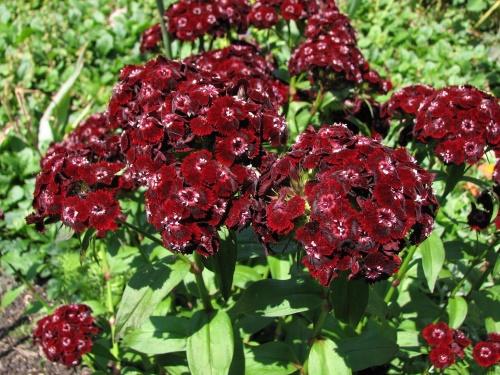 In general, the plant is considered unpretentious, but has its own characteristics. By its nature, the bearded carnation is a perennial, but here it grows as a biennial. The bushes have a two-year growing cycle, and the flower reproduces most often by seeds. The easiest way is to sow them directly into open ground, but you can also sow them for seedlings. In the first year of life, the carnation builds up a lush leafy rosette. Flowering will come only next summer..

You need to plant a Turkish carnation in a well-lit place, but it can survive partial shade. The plant is not demanding on the soil, but it blooms more abundantly on nutritious loams. Yearling bushes winter well and do not need shelter in the south. In regions with a cooler climate, cover the flower bed with spruce branches. Carnation reproduces well by self-sowing.