Tell me how to cover grapes for the winter in the middle lane? We planted young bushes of table varieties, everyone in our family loves them very much. Although we chose frost-resistant seedlings, I am worried how they will survive their first winter. We have it quite cold, and even my perennial garden crops sometimes freeze. When to cover and the better? 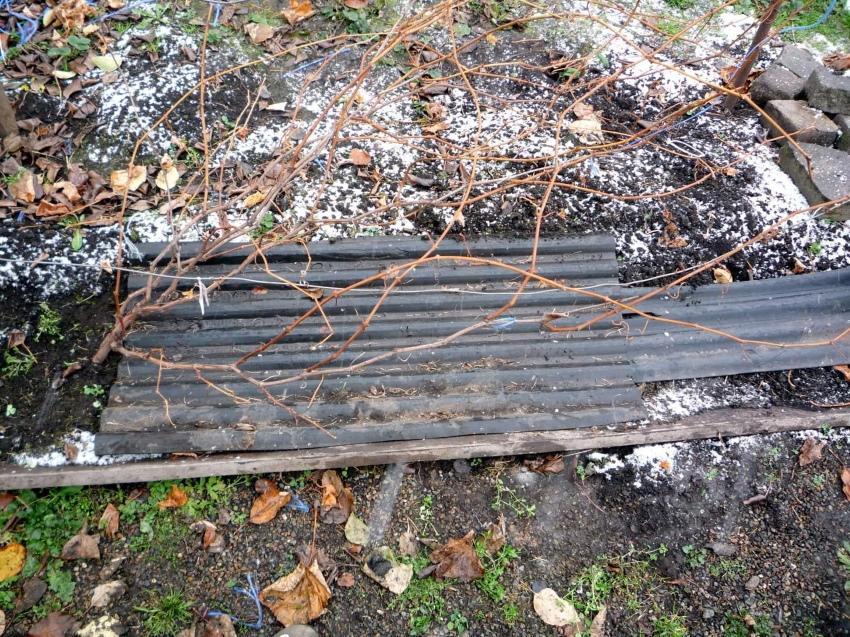 Perhaps the grapes do not need protection from frost only in the warm southern regions. In the rest of the territory of our homeland, it must be covered. How to cover grapes for the winter in the middle lane depends not only on the nature of the winter. Of course, if it has little snow and frosty, then it is necessary to approach the procedure more responsibly. The snow itself already serves as a “fur coat” for the bushes, but it cannot always cope with the assigned task. Thus, young plants with thin bark are more vulnerable and need additional protection. The same can be said about the bush that is rich in harvest. Having spent a lot of energy on abundant fruiting, it loses part of its frost resistance.

When to start hiding grapes 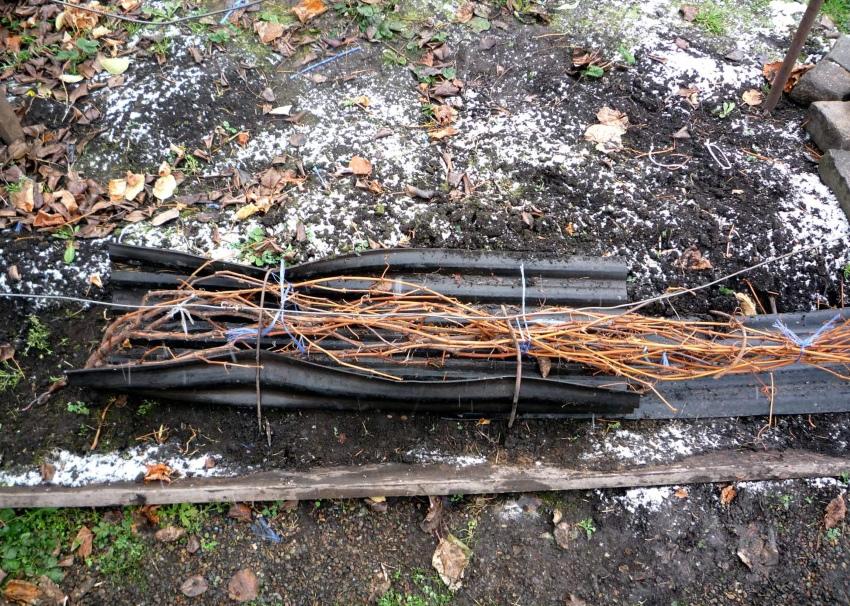 An adult bush can withstand mild frost and will not suffer at minus 5 °. Moreover, experienced growers advise holding the prepared (laid on the ground) vine for a couple of days before building a shelter. This increases its resistance to low temperatures. But the first years should not be left unprotected and wait for frost, but cover earlier. On average, in the middle lane, covering work begins in the second decade of November. At the same time, you cannot do this in rainy weather and hide a wet vine – it will crack later.

You can focus on leaf fall and the first frost. As soon as the grapes lose their foliage and the temperature drops, you can start working..

Preparing the vineyard for wintering 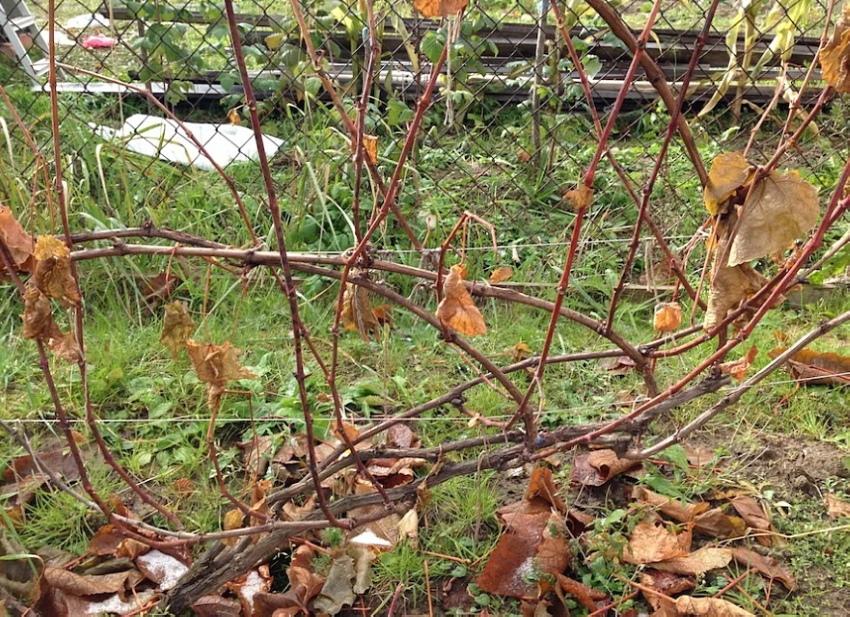 Before going for materials for the construction of a shelter, vines need preliminary preparation. You can’t just take and wrap a long vine like that, it should first be shortened, especially old bushes. And carry out the autumn feeding. It will replace the loss of nutrients in the current season and strengthen the vineyard. In addition, there may be disease-causing spores on the shoots. Therefore, it is extremely important to carry out a disinfectant treatment with special agents. And if the summer turned out to be dry, do not forget that the grapes need water-charging watering, which will help them survive the winter. Dry soil freezes more in winter, which leads to damage to the root system of plants. And rodents love to feast on a succulent vine. So it’s better to place baits for them and protect the bushes..

When to carry out water charging 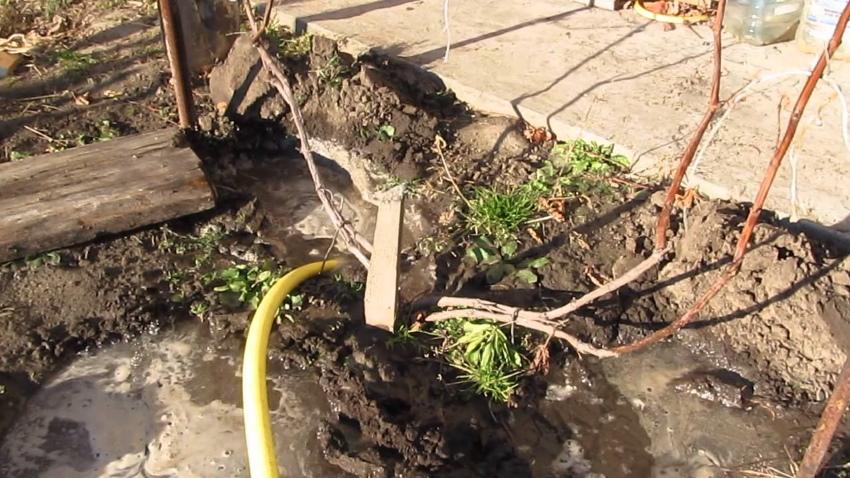 It is on the eve of wintering that it is important to provide the vineyard with moisture, especially in the absence of rain. If autumn is damp and rich in precipitation, you can skip this point. In general, watering should be done after harvesting. While the bunches are hanging, this cannot be done – the berries will begin to crack from excess moisture. One, but plentiful, watering is enough around the month of October. And so that the water reaches the roots, it is advisable to make grooves around the plants. Or even deep holes, pouring right into them.

Water consumption rates depend not only on the size and age of the plants, but also on the composition of the soil. Heavy soil, especially with clay particles, retains water and is poorly permeable. In such areas, 2.5 buckets of water will be enough for an adult bush. But on light sandstones, the water passes, as if “through fingers”, without lingering. Grapes growing in such conditions require up to 6 buckets for each bush (again, an adult).

Why and when to prune grapes in the fall 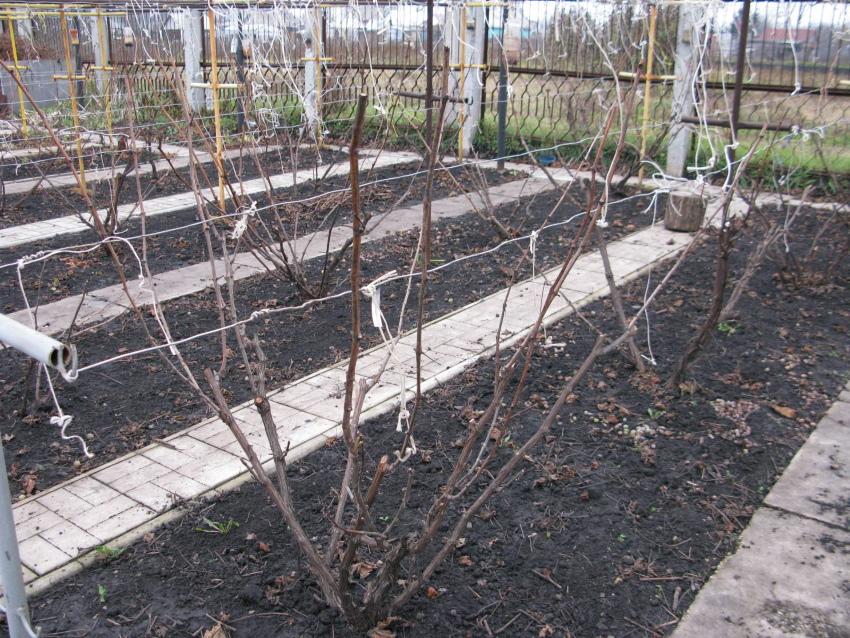 A pruned bush is, above all, easier to cover. And if the vine is partially sick, this is a good way to protect the rest of the grapes. Removing the affected shoots will prevent the spread of the disease. The shortened vine no longer spends energy on a thin young growth, which will still lie down for removal in the spring. This means that it will receive more nutrients, enter the winter stronger and survive it better. And in the next season, the juice moves more intensively on such shoots, and the crop ripens faster. Moreover, the berries themselves are larger than on an unshorn vine..

Pruning times depend on the growing region, but the main guideline is leaf fall. As soon as the bush sheds foliage, you can start pruning. Previously, you should not do this, as well as pick off the leaves yourself. They must supply the vine with nutrients, otherwise it will weaken. But postponing is also dangerous – the shoots from frost become fragile, break, and the wounds do not have time to heal.

The pruning scheme can be different, depending on the grape variety and the method of its formation. But in general, they adhere to these rules:

It should be noted that the number of eyes left depends on the type of crop. In addition, during autumn pruning, it is necessary to make a reserve and leave a couple of more buds in case of freezing.

How can you feed grapes in autumn 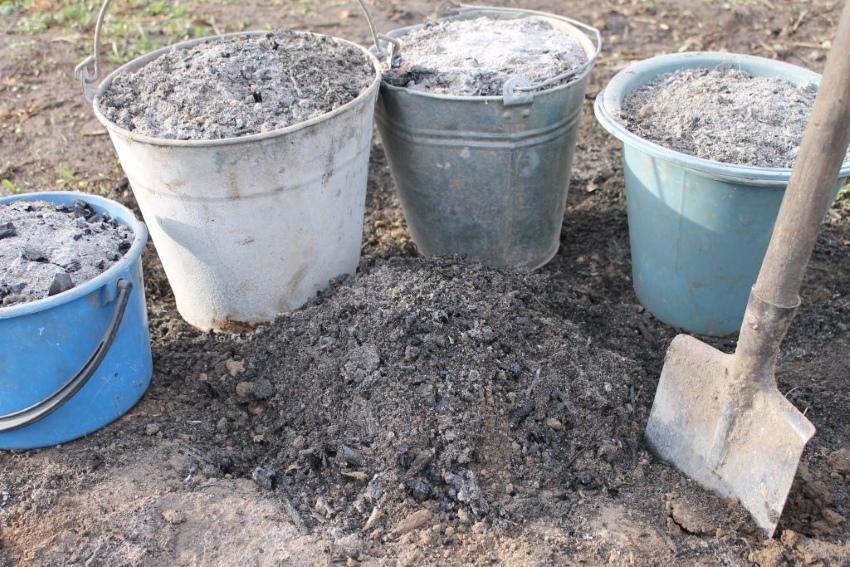 Before wintering, shrubs need potassium and phosphorus. Nitrogen fertilizers are not applied in autumn. Organic top dressing works well – compost along with wood ash. They are brought in for digging.

Of the mineral preparations before winter, you can add to the vineyards: 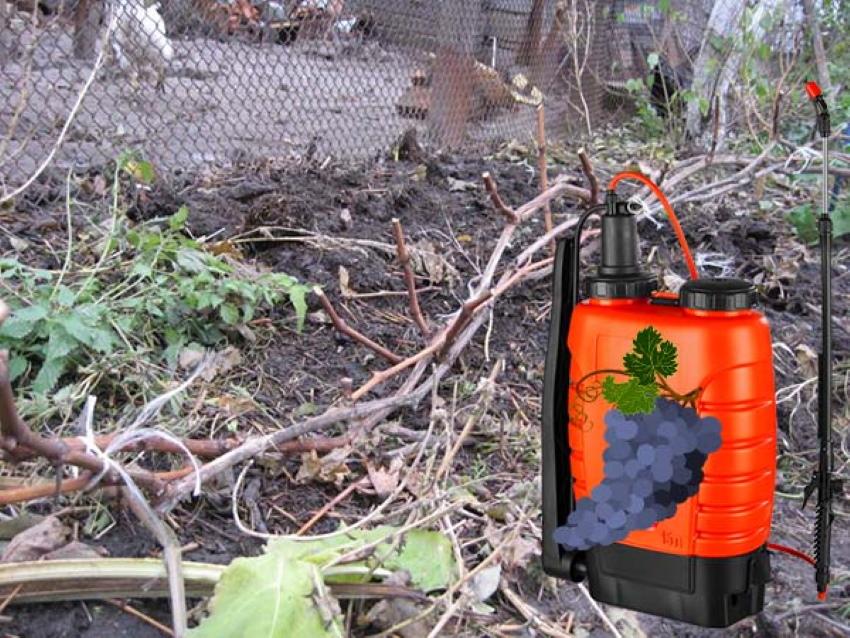 Even if the vineyard is absolutely healthy, for the winter it needs to be sprayed with a solution of copper sulfate. Early varieties are processed immediately after harvesting, the rest – in late autumn, before the bushes are sheltered.

If there are diseased plants, they are treated depending on the cause of the problem:

How to hide grapes in the middle lane 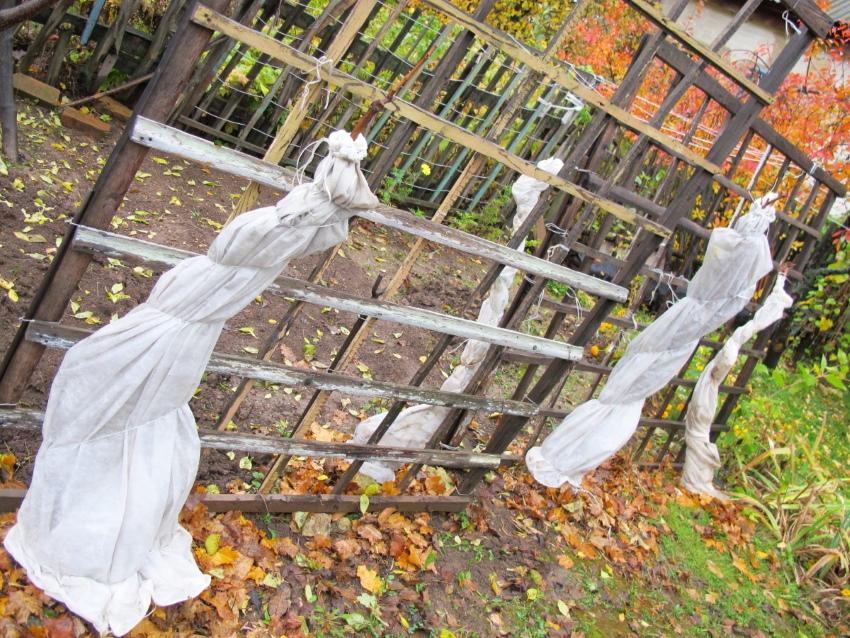 There are many ways to hide, and every gardener has his own favorite, which has been tested in winter. However, regardless of them, the main goal is to protect the root system. The frozen vine can be cut and in the spring the bush will give new shoots. But if the root suffers, this will lead to the death of the entire plant..

Young low bushes can be covered “standing” by erecting a frame over them. In other cases, the vines are removed from the support and laid on the ground or in trenches. It is best to do this with dry plant mat or boards.

All types of shelter can be grouped and divided into two categories: dry and wet. If the shrub is covered with shields, slate or waterproof material, it is a dry shelter. Wet means mulching (with soil, spruce branches, straw).

Protecting grapes in winter will help:

How to cover grapes for the winter in the Moscow region

In this region, winters are usually quite snowy, which only plays into the hands of gardeners. It is no secret that the best “blanket” not only for grapes, but also for other covering crops, is snow. By collecting it from the site and adding it to the vineyard, you can protect plants from frost with minimal effort..

But in some cases, more secure cover is required. First of all, this applies to tender young seedlings rooted in the fall, as well as young last year’s bushes. Additional protection will not interfere with varieties with low frost resistance or those that have been ill in the current season. In addition, the weather often presents surprises and the desired heavy snowfall can hardly be expected..

Methods for insulating grapes for the winter in the Moscow region can be used the same as in the middle lane. However, it is more reliable not only to huddle the bushes, but also to cover them completely..

How to shelter grapes for the winter in the Urals

Until recently, the harsh Ural climate was considered unsuitable for thermophilic crops such as grapes. But thanks to breeders, varieties with increased winter hardiness were bred. They are not only able to withstand the unpredictable and relatively cold short summer, but also the cold Ural winter. Where frosts are stable at minus 20 ° C, it is quite possible to preserve the vineyard and get a harvest. In the Urals, mostly early grapes are planted, and they also cover it well, especially young plants..

For adult plants, all possible methods are used, which are also used in the middle lane. But a young vineyard is weaker and needs better protection. And various materials can help in this, from film to ordinary boards. It is especially important to insulate the bushes well in the first year of life. Their young vine is not woody enough yet.

There is no need to rush to cover – the vine will become healthier and more resilient if it “freezes” a little. The optimum temperature for protective work is minus 5 ° С. 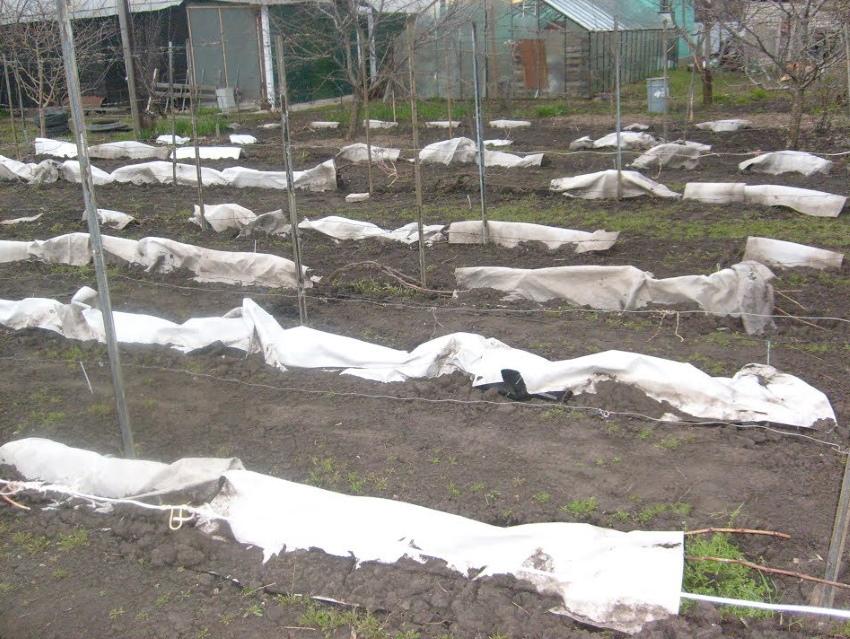 However, in this climate, nighttime temperatures tend to drop sharply. Therefore, in the Urals, it is better to carry out the shelter in two stages:

When using temporary cover, it is important to leave ventilation holes so that the vines do not snatch.

How to shelter grapes for the winter in Siberia 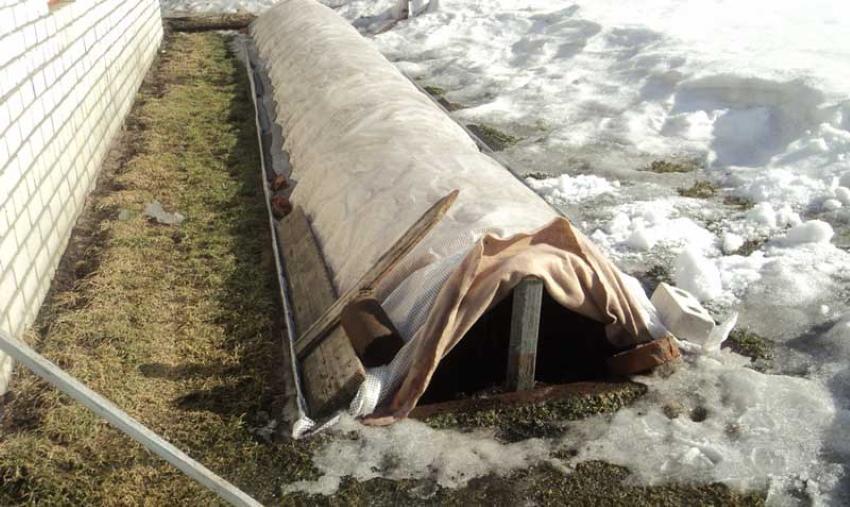 In regions with a particularly cold climate, the “dry method” of sheltering grapes is still used. It allows you to minimize contact of the vine with frozen soil and moisture from the outside, and also creates a good microclimate for wintering..

Thus, when choosing how to close grapes for the winter, you should focus on the climate and your own capabilities. In a warm and rain-rich winter, healthy mature shrubs will not freeze on organic litter and under a good layer of snow. In more severe weather, it is better to hide a small vineyard in a makeshift greenhouse. In large areas, it will be less costly to cover the plants with non-woven or improvised material..

Shelter for grapes from spandbond and film – video