Please tell us in what time frame and how is the pruning of apple trees carried out in the fall? We used to have a good vegetable garden at our dacha, and every year we planted it completely with vegetables. Unfortunately, with age, this work became unbearable for us, so we decided to plant a garden instead of a vegetable garden. While we can still, we will cope with it ourselves, and there the children will remain. We stopped at apple trees, they are very fond of in our family. We bought seedlings in the spring, planted them, now it’s time to think about how to cut them. And the old apple tree will not hurt to rejuvenate, the fruits are less and less every year. When can you prune and are there any differences in pruning young and old trees? 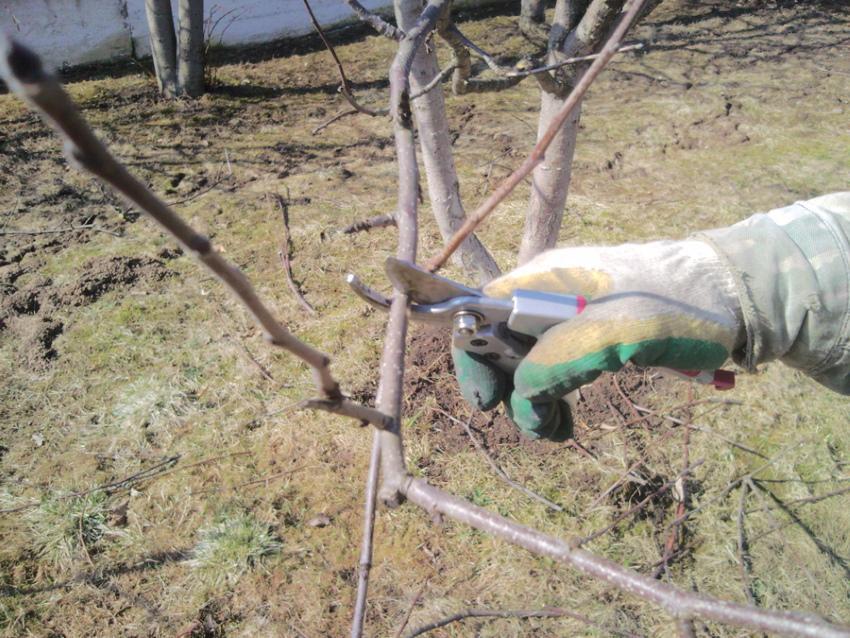 For gardeners, pruning apple trees in the fall is a great opportunity not only to tidy up your garden, but also to “unload” spring chores. In the spring, there are already many things to do: you need to spray trees from pests, and to prevent diseases, process and feed. And if the garden is large, you should also have time to cut it before the buds bloom. In order not to have to rush, it is better to postpone this procedure until the fall. An autumn shearing of an apple tree is well tolerated if you meet the deadline. Moreover, it helps to improve the nutrition of trees, forms and “unloads” the crown, which improves productivity indicators..

However, it is important not only to prune the apple trees on time, but also to do it right. Do not forget that the general development of garden dwellers depends on this. In order for trees to grow strong, get sick less often and give a bountiful and large harvest, you need to know how to cut them. What the pruning will be will determine the appearance and age of the plant. If young cultures need shaping pruning, adult “ancient” specimens require rejuvenating procedures. What is their difference and when is the right time for autumn pruning – this is what we will be talking about today. 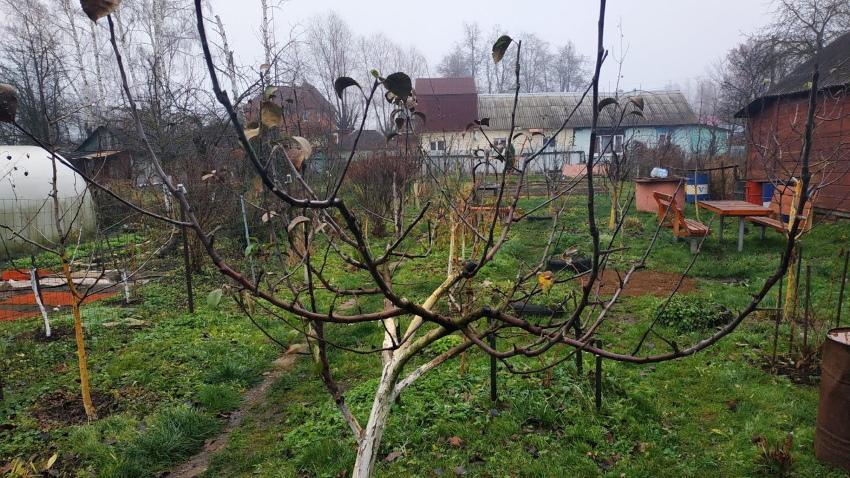 Gardening autumn work has only one drawback, which, however, is easy to fix: late pruning threatens the death of the garden. In place of the cuts, live wounds remain, which should have time to heal before the onset of frost. Do not delay pruning to the last in the hope of a warm and long autumn. The weather has been so changeable lately. The first “minus” will easily penetrate a fresh cut and freeze the branch, making its own adjustments to your plans.

It is difficult to name the exact timing of pruning, because they depend on the climate and will be different in each growing region. On average, this is the month of October. The main rule: there must be at least 2 weeks in stock before frost. This time is enough for the apple trees to tighten the cuts. You can focus on the leaves. As soon as they start to fall, it means that the trees have stopped growing and it’s time to start pruning them..

At the same time, in northern latitudes, it is more expedient to postpone the procedure to spring. The autumn period is short there, winter often comes suddenly, and persistent disadvantages are immediately established. Apple trees simply do not have time to heal their wounds, and they will freeze. 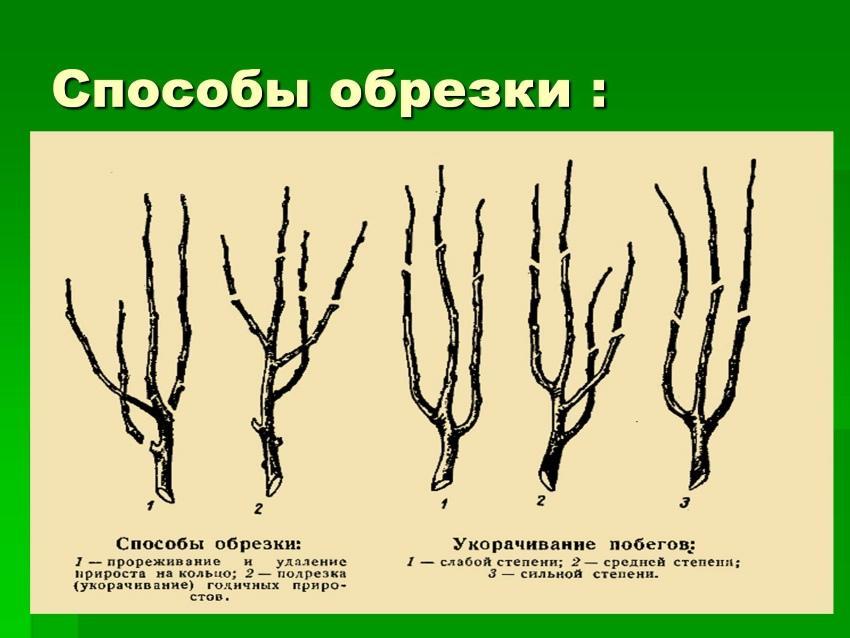 There are several types of garden pruning, including apple trees, depending on its goals, the age of the trees and the degree of shortening of the shoots.

Based on what goal is in front of you and in what condition the garden is, pruning apple trees in the fall can be:

In addition, pruning includes not only completely removing shoots, but also shortening them.. From how strong it will be, pruning happens:

Let’s consider each type of procedure in detail. 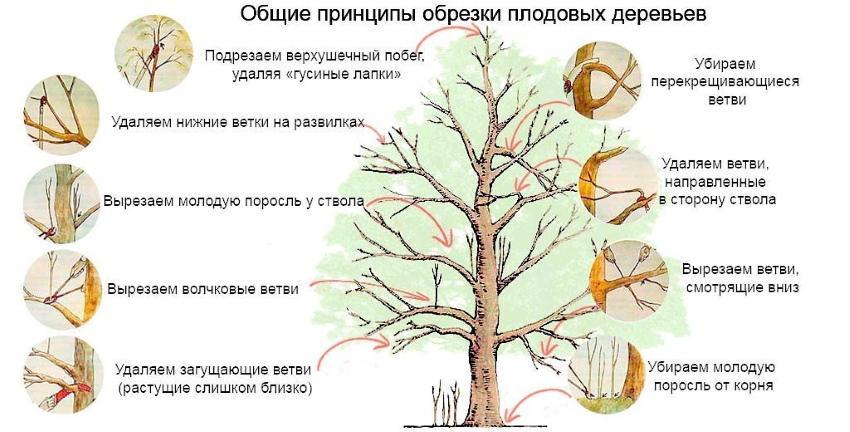 There are general pruning rules that determine which shoots should be completely removed. They need to be guided not only during the autumn, but also when performing the spring haircut of the garden. They are also the purpose of the sanitary mowing of trees..

So, when starting to sanitize pruning, do not miss and completely cut these branches:

If the branch of the apple tree is dry or partially affected by the fungus, it is allowed to leave its healthy part. If so, trim the shoot to healthy or live wood..

And the shoots are wild, and the tops draw juices from the apple tree. They thicken the crown, reduce yield and disease resistance. Therefore, such branches are subject to mandatory deletion. But with tops, there may be an exception. When the apple tree has withered or “degenerated” only one branch, you can replace it with a young top.

How to rejuvenate an old branch with a spinning top 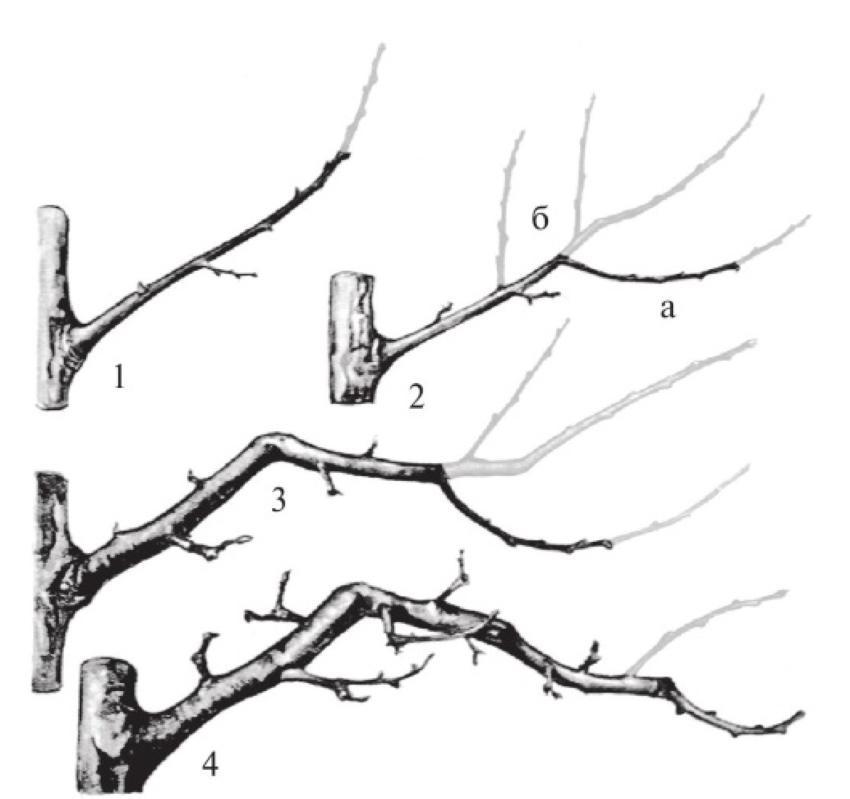 Over time, tops appear on the old branches of the apple tree, while the shoot on which they grow can be both healthy and dying. In the latter case, there is no point in leaving the disappearing branch. It is more expedient to rejuvenate it at the expense of the most developed young top, turning the latter into a fruiting branch. It is best to do this in the fall, and then after 2 years you will be able to see the first harvest..

Partial rejuvenation of the crown through tops is carried out in this way: 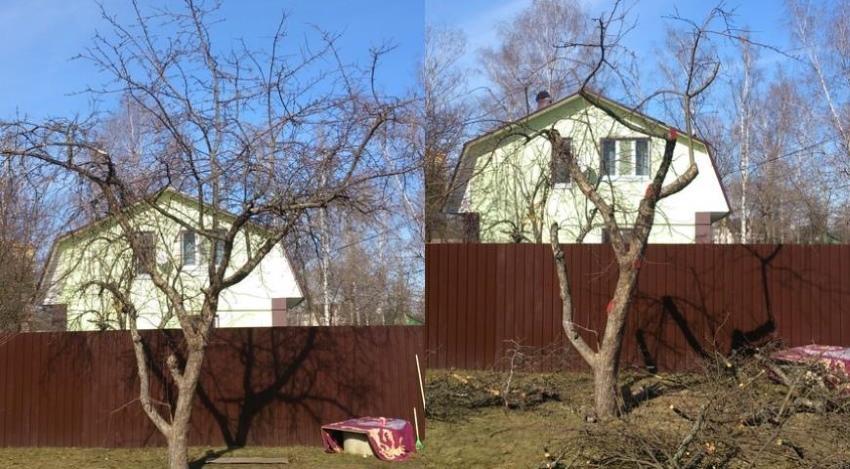 Apple trees are actively developing and bear fruit abundantly on all branches up to 20 years of age, then they need rejuvenation. If this is not done, then the fruits will be tied only at the top. At the same time, the tree itself becomes too tall, which makes it difficult to care for it in terms of the same pruning and harvesting. Rejuvenation is recommended no more than once every 5 years.. 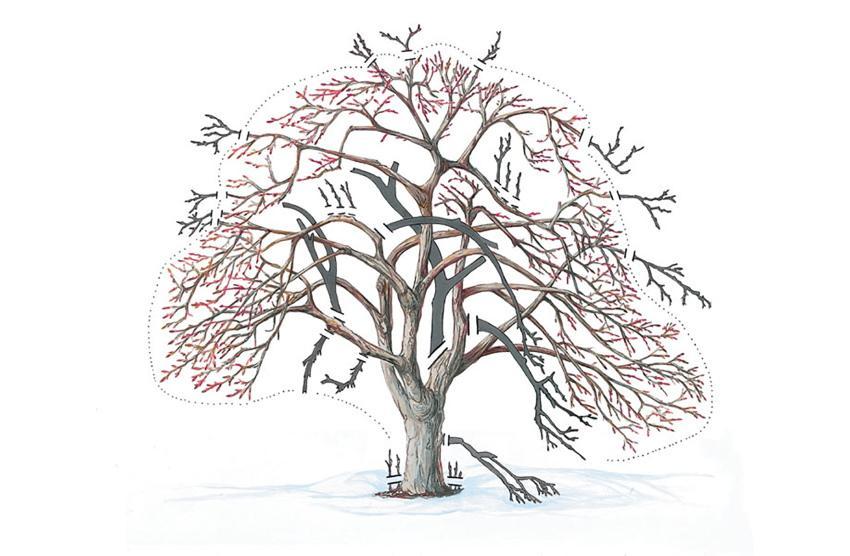 How to properly do anti-aging apple pruning:

Too old and neglected apple trees cannot be rejuvenated and drastically pruned at one time. This is too much stress for the tree. It may not survive the intervention and dry out completely. Divide the procedure for 2 – 3 years, replacing no more than 3 large branches at a time each year.

Formative pruning of an apple tree in autumn

If you laid an apple orchard in the fall, then you can start forming the crown of the seedlings right away. In any case, this process is long and will last for a couple of years. Trees develop unevenly, at one level a couple of shoots may appear in one season and several more in the next. 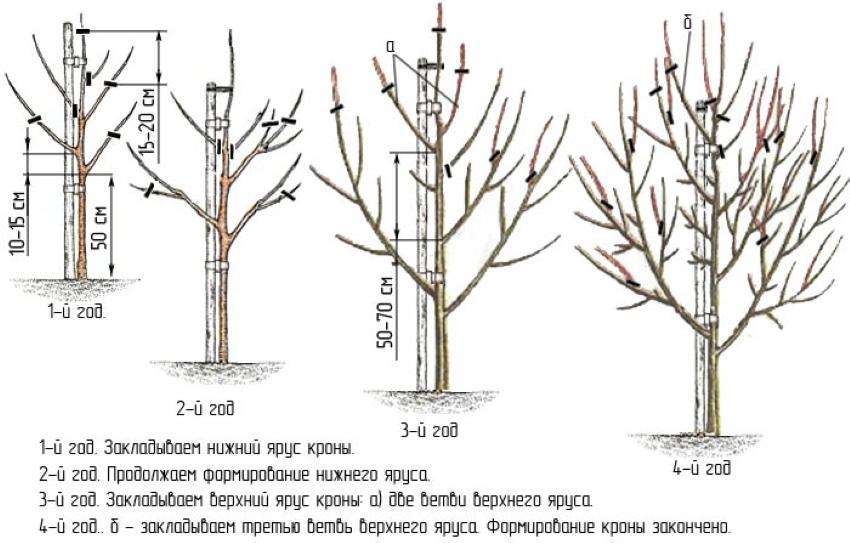 The formation of the crown of a young apple tree takes from 3 to 4 years, depending on how old the seedling you purchased. Usually the crown is made in 2 or 3 tiers. The more tiers, the taller the tree as a whole and the thicker its crown. This is inconvenient both in terms of care and for the apple tree itself. Too many branches require increased nutrition, which has the worst effect on the yield and durability of the tree.

For novice gardeners, information on how to form a crown step by step, from the year of planting until the culture reaches 4 years old, will be very useful.

If you have purchased a one-year-old seedling, it will not have side branches yet, only one stem. In the fall, shorten this twig by ¼ its height. For the first year, that’s all. If your seedling is already a couple of years old, and it has side shoots, go straight to the next step..

In the next season, start laying the first, lower, tier of skeletal branches. It must be at least 50 cm above ground level. Therefore, cut out all lateral shoots that appeared over the summer and growing below this value..

Form 3 skeletal branches from the branches growing above. Choose the strongest, growing in different directions and at an angle to the central stem no more than 55 °, and shorten them. On one tier, branches can be up to 15 cm from each other. Remove the rest of the shoots.

Sometimes it happens that the young growth does not want to “lie down” and grows almost vertically, like tops. Do not rush to remove it, because such shoots can be changed direction by bending them in the right direction. It is best to bend the branches in the spring, when sap flow begins – then they are more flexible.

Remember to shorten the growth point. It is simple to determine at what height to cut the top off: from the tip of the upper skeletal branch to the top there should be no more than 20 cm.

Continue to form the first tier of skeletal branches. They have already started branching. Shorten part of the branches by 1/3, “remove” the top of the main stem to stimulate the laying of the second tier.

Shorten the tops of the shoots from the first (lower) tier so that they do not go over the upper branches. If the apple tree has given a strong growth, thin out the branches. Remove 1/3 of the length of young shoots of the second (upper) tier so that lateral buds also awaken on them. Cut the center conductor to contain height.

The further purpose of pruning is regulatory. It should be weak, as the strong pruning of the branches will induce the young shoots to grow vertically. They will thicken the crown, reduce the yield and resistance of the tree to diseases and pests..

In addition, every 4 years, replace the fruiting branches with young ones so that the fruits are large and their number does not decrease.. 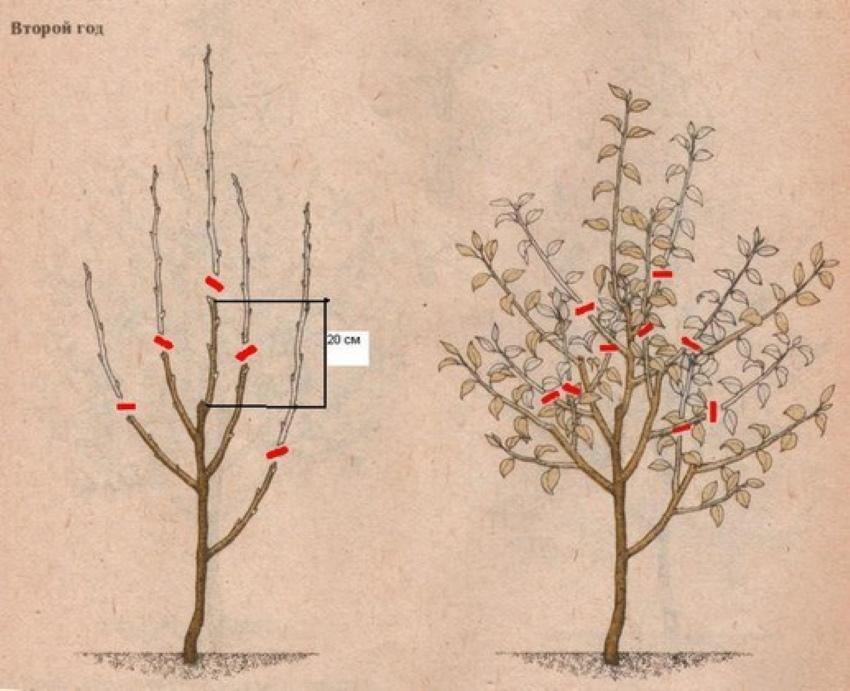 Studying how the pruning of an apple tree is carried out, it is worthwhile to separately dwell on dwarf varieties. Despite their short stature, they give an excellent harvest. In some varieties, the size of the fruits is almost the same as the larger types of apple trees. But in order to maintain high yields, such trees need to be pruned annually.. Moreover, it differs significantly from the procedure for ordinary apple trees:

Such a strong pruning of apple trees in the fall for dwarf varieties is only beneficial, unlike ordinary apple trees. With renewed vigor, the crown begins to grow rapidly, laying new branches. And although the number of fruits becomes smaller, the apples themselves grow larger.

Summing up, it should be noted that pruning apple trees in autumn plays an important role in gardening. It helps to reduce and correctly distribute the fruit load, which increases the quantity and quality of the crop. In addition, apple trees free from excess shoots winter better and get sick less often..

How to properly cut an apple tree in autumn – video