Last year we bought a summer cottage with a small but neglected garden. There are two jasmine bushes growing there, just huge ones, on which there are many bare branches. It is a pity to uproot them (it is too beautiful to bloom), I would like to try to rejuvenate. Tell me how to prune jasmine in spring? 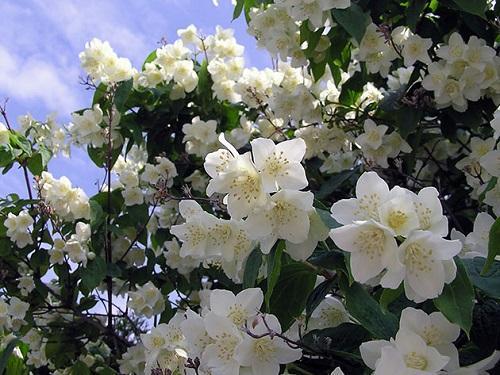 Jasmine is grown quite often in summer cottages. Basically, it is planted for the sake of a beautiful decorative appearance, because the flowering bush looks very attractive, moreover, it emits a sweet aroma. In addition, jasmine is often used to create a picturesque green hedge, as it tolerates pruning well..

In fact, pruning shrubs is mandatory not only when forming a “living fence”, but also when planting single jasmine. Without it, a beautiful and neat bush eventually takes on an abandoned and unkempt look, and, most importantly, the quality and quantity of flowering is significantly reduced.

How to prune jasmine in the spring depends on what pruning is done. There are three types of work:

What is Sanitary Pruning?

If the winter turned out to be especially frosty and with little snow, this affects all cultures, including jasmine. Then the tips of adult branches freeze slightly, and young shoots can freeze completely.

The essence of sanitary pruning is precisely to clear the bush of dead shoots, completely cutting out dry branches and trimming frozen tops..

It is necessary to prune jasmine in early spring, before sap flow begins..

How to properly rejuvenate jasmine?

Rejuvenation of the jasmine bush (photo) depends on its general condition. If a lot of branches simply formed on the bush, as a result of which it became too thick, it is enough just to thin out the shoots, removing the weakest and those that grow incorrectly. This will make the crown more spacious and provide it with free air access, which, in turn, will increase the quality of flowering..

Thinning is recommended at least once every three years..

In advanced cases, when bare, old and non-flowering shoots have already formed on the jasmine, a more radical intervention will be needed. For complete rejuvenation of the bush, all branches should be removed at the root, except for the 5 healthiest and youngest ones. They also need to be significantly shortened, leaving no more than 40 cm in length..

Cover the cuts with garden varnish, and mulch the bush in order to delay the evaporation of moisture. In addition, during the season, you should water the chubushnik abundantly and apply nitrogen-containing fertilizing, and in the fall the jasmine will grow young twigs.

Spring is the perfect time to form jasmine and grow a beautiful bush. If you leave it to its own devices, you can get a not very beautiful result – both one-sided shrubs and tall (more than 2 m) trees, which will be difficult to care for..

In the spring of planting, the mock-orange should be carefully trimmed by cutting off the branches that are too long and protruding beyond the bush. In addition, formative pruning is the basis for a jasmine hedge. In this case, the strong old shoots should be lightly pruned and the young and thin branches removed to stimulate the formation of annual shoots..