Please advise what can be prepared from frozen tomatoes? Except for putting them in pizza, nothing else comes to mind. Last year we had such a harvest that I didn’t know what to do with the tomatoes. And she rolled it up, and provided for all the neighbors, and even in the freezer filled a whole shelf with them. Freeze, by the way, for the first time, cut into rings, so I don’t even know what vegetables will be when they melt. 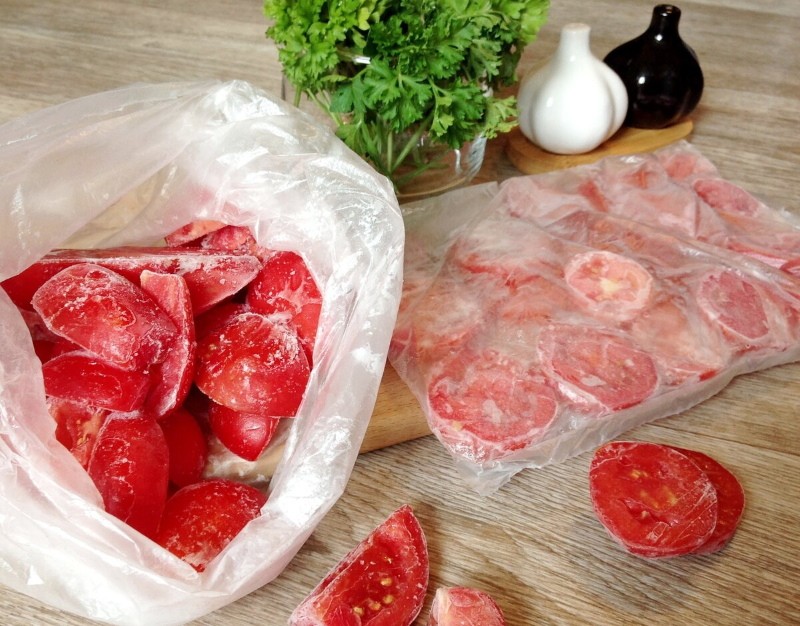 One way to harvest tomatoes and many other vegetables for the winter is to freeze them. It allows you to preserve the taste, aroma and nutrients, and will also help out a lot if there is nowhere to store the preservation. In addition, you will not have any problems with what can be prepared from frozen tomatoes. The only thing is that for salads you still have to go to the store for fresh vegetables. But otherwise, frozen tomatoes are very good substitutes for fresh ones in any recipes, from first courses to sauces..

Is it possible to freeze tomatoes and how exactly 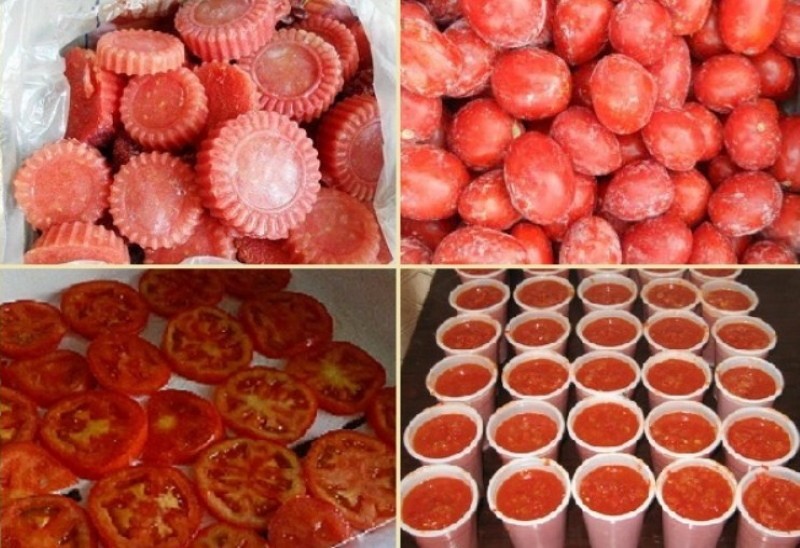 Some housewives believe that tomatoes are too juicy to be harvested in this way. Indeed, when they thaw, excessive wateriness is observed, plus the taste is slightly lost. But this is if you store such blanks for too long and then use them fresh. If you cook (stew, fry, boil), then frozen tomatoes are almost no different from fresh ones. They saturate the dish with the same taste and smell..

There are many ways to freeze vegetables. By and large, it all depends on how much space you are willing to allocate for them. If you have a large chamber, you can simply put the tomatoes in bags and freeze them whole. Such vegetables will then be used for stuffing, and if it is cherry, then they are immediately put whole in dishes.

Less space, but just as good, will bring tomatoes when cut into rings or cubes. Or make mashed potatoes by rubbing the fruits and putting it in portions in small containers. Tomato juice can also be frozen. Filling in small bottles.

Another indisputable advantage of harvesting tomatoes using a freezer is the shelf life. Not a single fresh vegetable will last as long as tomatoes in a chamber – almost a year. Of course, preservation is sometimes kept longer, but this is a completely different conversation, as is the taste..

What can be made from frozen tomatoes As we have already noted, tomatoes from the freezer are suitable only for those dishes that need heat treatment. Fresh fruits are not used, not because they cannot. Just after the vegetables melt, they lose both their appearance and dense texture. And the taste is not at all the same as it should be in fresh fruits..

There are no restrictions on all hot dishes for frozen tomatoes. You can safely use them for cooking:

Even tomato juice can be made from frozen tomatoes if there was no time to prepare it in the fall..

How to make a stew with frozen tomatoes and other vegetables