Frost-resistant shrubs for Siberia: we make a hedge

Tell me, what can you make a hedge in Siberia? Our site is located in such a way that the wind is constantly walking on it. I would like to create a protective wall of vegetation, so that it shelters from the wind and looks beautiful. 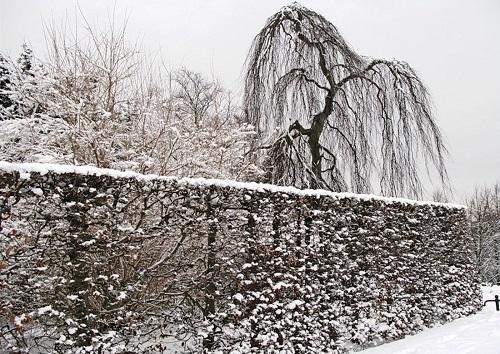 There is one very important aspect to consider when choosing plants for a hedge in harsh climates such as Siberia. In addition to the beautiful (and, if desired, unapproachable) appearance of plants, it is worth studying their ability to withstand low temperatures. After all, winter in Siberia comes early and lasts a long time, in addition, it is usually accompanied by large precipitation and low temperatures. Shrubs with poor winter hardiness are absolutely inappropriate in such a region – they will simply freeze out.

What can be used to make a hedge in Siberia so that after a long winter it remains healthy and does not lose its appearance and beauty? We offer a short selection of winter-hardy plants that will help you make the right choice.

Such representatives of conifers have high frost resistance:

The advantages of using conifers are obvious: they stand green and beautiful all year round, belong to long-livers and, moreover, purify the air..

Deciduous plants for growing in Siberia are suitable:

If the purpose of creating a fence is not only its decorative effect and protection from the wind, but also impassability, you can plant:

Shrubs for hedges in Siberia – video