Pruning forsythia in the spring – the subtleties of the procedure

Tell me how the forsythia pruning is done correctly in the spring? I planted a seedling last year, this season I did not touch it. I water it – I fertilize the bush well, it has already grown decently, and in width too. It even seems to me that it is too thick. Probably need to cut and thin out a little. When and how to do it? 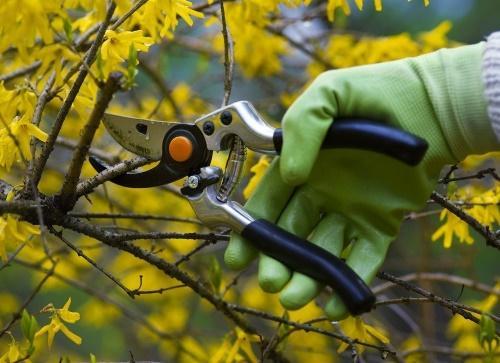 Forsythia is one of the most beautiful ornamental shrubs that will delight you with its multi-colored color. In the spring it turns gilded, covered with yellow flowers, in the summer it is covered with dense green foliage, which takes on a purple hue in autumn. Given the rapid growth of the crop, one of the most important procedures is pruning forsythia in the spring. It helps to prevent thickening of the bush, because during the season forsythia grows many young shoots..

In addition, pruning stimulates annual and lush flowering, and this crop has its own characteristics. It blooms in early spring, when most garden plants are just beginning to bloom their leaves. And the flowers themselves bloom only on last year’s shoots. On young growth and branches over 2 years old, flower buds are not formed. If you do not cut the bush, over time, flowering will move only to the periphery, and most of the crown will be without buds.

When is the best time to trim 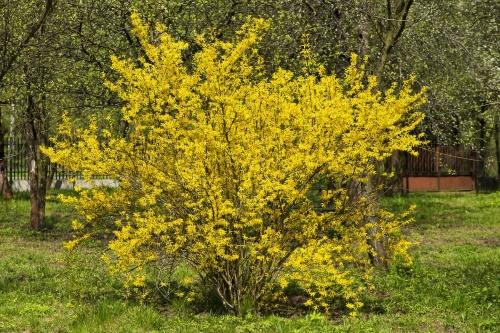 Forsythia flower buds are laid in the fall, so the opinion that autumn pruning is preferable for it is not very true. Of course, if necessary, the bush can be trimmed in October. However, you need to be prepared for the fact that this will lead to the loss of most or even all of the buds..

The exception is rejuvenating shrub pruning. It must be done even earlier, before flowering.. 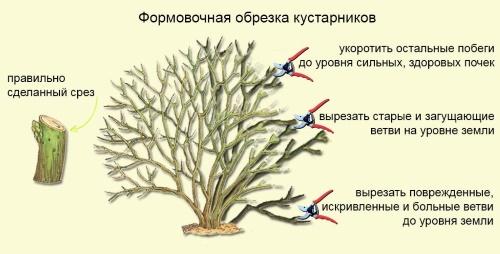 Spring pruning is regular. It helps to maintain a neat appearance of the bush, prevent aging and maintain abundant flowering throughout the crown.. The haircut consists in the following actions:

As for anti-aging pruning, it is not carried out at one time, but for 2 seasons. In the first year, you need to completely cut out most of the old branches, leaving no more than 5 of the strongest. Over the summer, the bush will give a strong growth. The next spring, also before the buds bloom, the old shoots left behind should be removed and the young twigs thinned out. Those that remain should be shortened so that they begin to branch. Thus, in the third spring, the shoots that have grown in the first summer will bloom.

How to prune forsythia after flowering – video