What is the difference between mimosa and silver acacia: interesting facts

Tell us, what is the difference between mimosa and silver acacia? I heard for a long time that these are different plants. But before March 8, the whole market is literally littered with yellow fluffy twigs, which are called mimosa. When I asked, only one woman “confessed” that she was selling acacia from her yard.. 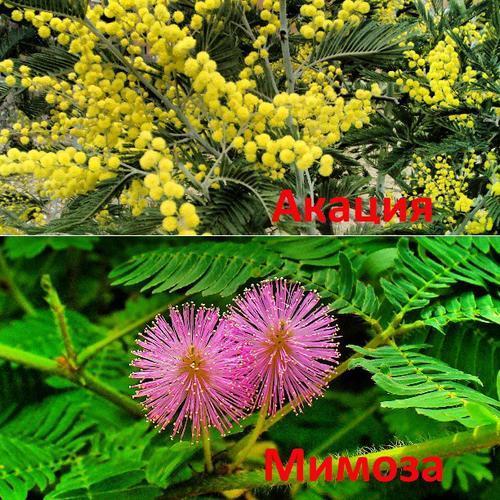 In the vastness of our homeland, the first spring twigs with fluffy yellow flowers and feathery leaves are called mimosa. For a long time, a bouquet of miniature solar pompons has been associated with the women’s holiday and the beginning of spring. However, in reality, what we know as mimosa is the silver acacia. It is she who is sold as part of bouquets or as separate branches. Why did this confusion arise and how does mimosa differ from silver acacia??

What plants have in common

First of all, both crops are members of the legume family and are part of the mimosa subfamily. Most likely, this was the reason that in our area acacia is known as mimosa.. However, they are united not only by this:

What is the difference between mimosa and silver acacia

To begin with, mimosa is a small herbaceous shrub with climbing shoots. This is a true tropicana, which does not grow in the open field in our country. Growing mimosa occurs mainly in greenhouses and at home. In the latter case, bashful mimosa is most often planted. She grows like an annual due to her capricious nature and excessive requirements for living conditions..

The bashful mimosa has another characteristic difference: it “lives its own life.” The leaves do not like to be touched and closed.

Acacia grows in the form of a tree, the average height of which is 12 m.In natural conditions, there are also larger specimens up to 45 m in height.Acacia also loves warmth and has low frost resistance, but not as much as mimosa.

Silver acacia grows mainly on the Black Sea coast. It blooms early, already at the end of spring, and in a warm southern climate even in the middle of winter. And real mimosa blooms much later, from May to September..

You can even distinguish a sprig of mimosa from an acacia by the following features:

Given the difference in size, mimosa fruits are also several times smaller than acacia pods. But be that as it may, both plants are charming in their own way. If climatic conditions permit, you can plant an acacia in the garden, and let mimosa grow in a pot on the windowsill. Then you can admire their flowering in turn and almost all year round..

Differences and common features of mimosa and silver acacia – video