We were not very lucky with the soil in the summer cottage – the earth there is heavy, clayey. It takes effort to get the harvest. I want to try sowing a part of the vegetable garden with oil radish this season. I heard that it loosens the soil well. Tell me how to use oilseed radish as a siderat?

Unlike other radish varieties, the oilseed crop is not grown for the sake of a root crop. Its main value lies in the green mass, since the plant does not form a root crop as such. Instead, a very long and branched shaft grows, thicker in the upper part. Despite its unpresentable appearance, the roots of the culture are rich in trace elements such as potassium, phosphorus and nitrogen. And the green mass can reach up to 1.5 m in height, while it is characterized by a very rapid growth.

Due to these properties, oil radish is widely used as a green manure in horticulture. It not only improves the composition and structure of the soil, but also protects it from erosion. Crops left for the winter keep snow on the surface of the earth, which prevents it from freezing and rapid loss of moisture. Oil radish can be planted up to 3 times per season, because the plant reaches full maturity in 1.5 months. The first sowing of seeds is best done at the end of April – at the beginning of May, when the area becomes free after early crops.

To avoid thickening of crops, the seeds should be mixed with sand and sown evenly over the area. Fence the soil after sowing. For 1 sq. m. you will need a maximum of 4 g of seeds.

It should be borne in mind that during the autumn cultivation of green manure, the consumption of sowing material doubles. This is due to the natural slowdown in growth with a decrease in air temperature..

You can start embedding plantings in the ground 50 days after sowing, before the plant blooms. To do this, just dig up the site with a shovel. If the deadlines are missed, and the radish has grown in height, you first need to mow the green mass. It is better to pull out too thick shoots and put them in compost, where they will rot faster. 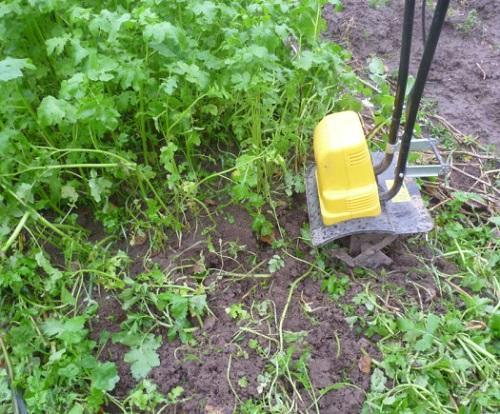 As a green manure, the variety is suitable for use in any region, because it does not lose its growth functions even in cold weather and endures a long absence of rain. The green manure radish is especially good for heavy soil. A strong and long root system will not only loosen the soil, but also “pull” useful substances from it to the surface, where they will be more available.

As a result of the use of oilseed radish as a green manure:

The leaves and shoots of the plant are completely decomposed if there is a sufficient level of moisture in the soil..