Grow strawberries hydroponically or Harvest all year round

Hello gentlemen! I am very much tormented by one question. Is it possible in Russia to apply the technology of planting and growing strawberries like on an English farm? thanks for the answer.

The method of growing strawberries shown in the video has found its application in Russia. This is called hydroponics – when the plants are grown using a special substrate that the soil does not contain. Most often, hydroponics is used in greenhouses, while planting not only strawberries, but also other types of plants. This technology allows you to get a high-quality harvest regardless of climatic conditions.. 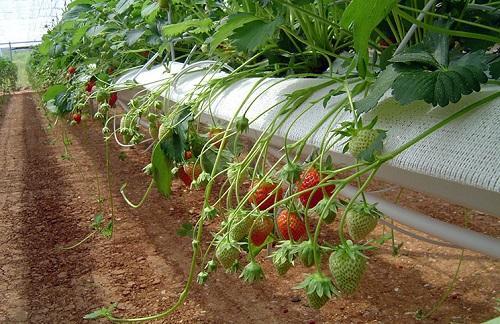 The hydroponic method is often used to harvest at an unusual time, that is, almost all year round. This is especially important in regions where temperature conditions are not very suitable for this thermophilic berry. In addition, the main benefits of hydroponics are:

The nutrient substrate for strawberries must be porous and allow air and moisture to pass through well..

Hydroponics can be used not only in the mass cultivation of strawberries. Quite often, amateur gardeners also use it, adjusting the technology to their home conditions, for example, growing berries on a balcony or loggia (insulated).

How to grow strawberries hydroponically?

There are several methods of hydroponics, but the most commonly used drip irrigation system, as in the video (you can see how pipes go along the gutter).

The cultivation principle is as follows:

Strawberries can also be planted in separate pots. They are suspended at the same height or installed in a pallet, and are combined by pipes into a common system. 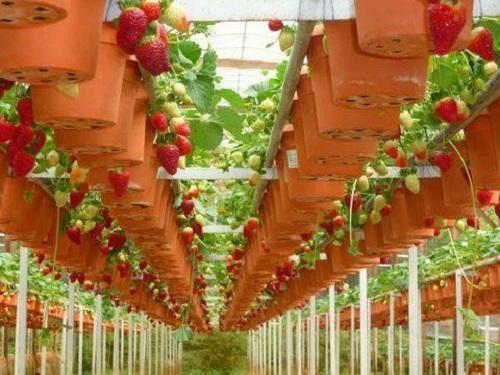 In hydroponics, both horizontal and vertical growing methods (for example, in bags) work equally well. But for cultivation it is better to use only remontant varieties of strawberries..

Through a single drip system, a special nutrient solution is supplied to each seedling. Every 2 weeks, a fresh composition is poured into the system, which depends on the growing season and the stage of development of the strawberries.

Hydroponic technology for growing plants in a greenhouse also provides for additional lighting and heating so that the seedlings do not freeze out in winter..