Can you tell me what the name of a colored cactus is? Knowing how much I love succulents and various unusual plants, my daughter always tries to surprise me and brings different exotic plants. So this time the surprise was a success – I have never had such an unusual “cactus”. Small, round, all so covered with orange thorns that you can’t even see what color its stem is. In general, the beauty is indescribable, it is a pity that there is no label with the name. What kind of species it is, is it artificially created or such cacti exist in nature? 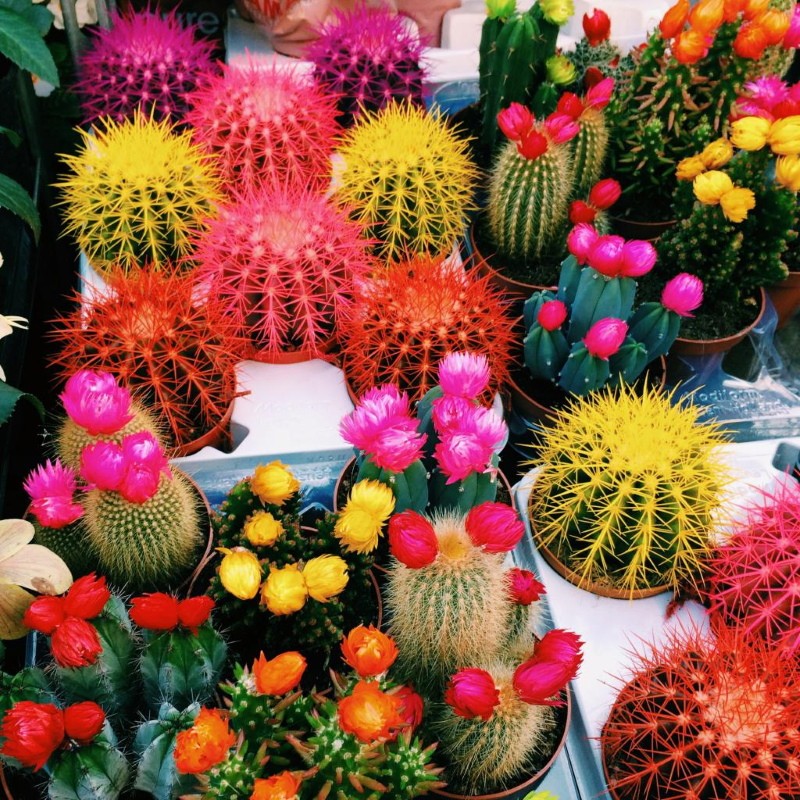 For some reason, there are fewer cactus lovers than orchid lovers, and many simply do not understand how to admire sharp thorns. And what do you say if the thorns are colored, you think there are no such things? Then it’s time to find out what the colored cactus is called and whether it really exists. Although it is difficult to deny what you can see with your own eyes and even touch. Today, in any flower shop that has a succulent department, there will definitely be at least one colored cactus. Where did the “colored albinos” come from and who should be thanked for their appearance – nature or man?

To begin with, the colored cactus is not a separate cultivar. This is just a general name for a group in which you can combine succulents with an unusual color. These can be plants in which parts of the stems do not have chlorophyll and therefore appear lighter in color. But cacti with colored needles look much more spectacular. The more muffled and lighter their color, the more likely it is that succulents received a contrasting color as a result of a gene mutation. Conversely, plants with too bright colors are almost always the work of breeders, which consists in artificial coloring..

Real colored cacti, which nature itself painted, are:

You can independently change the color of the needles in your succulents. This is not difficult at all, but it will take a long time until the process is completely completed. For painting, you will need food coloring of the correct color. For the plant itself, it is as safe as for us, but we use similar means in cooking. Now just add a little dye to the water every time you water. And gradually, after 5-6 months, its needles, and sometimes the “body” itself, will change color. 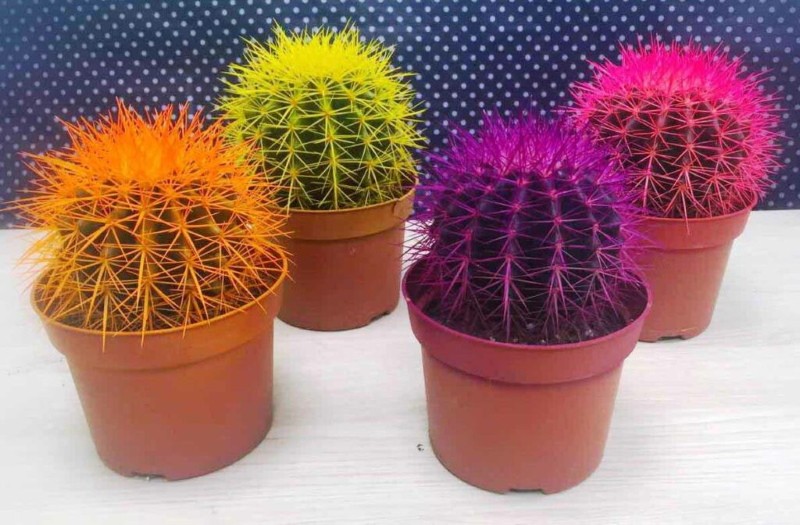 For experiments, choose only young specimens and preferably undersized ones. Old cacti, like tall ones, grow tight, besides, their thorns acquire a protective coating through which the dye is difficult to penetrate.

Having achieved the desired result, do not leave your brainchild – the color must be maintained. Otherwise, the cactus will revert to “factory settings” again. To do this, water the colored succulents more often than usual, but with a smaller amount of liquid (with the addition of dye). Also provide the plants with good lighting, and when transplanting, pre-spill the new soil with water and dye..

Colored cacti are a cultivar or not