Although small, but sweet and unusual tomatoes Black Moor – what is the peculiarity of the variety

What color should Black Moor tomatoes be, and are they early varieties? She sowed the seeds, only seven seedlings emerged from the package. I decided not to risk it and planted the seedlings in a greenhouse. Now on the bushes there are already small green tomatoes, some have turned red, but black and “does not smell”. Maybe they will darken later and how long do you need to wait before harvesting? 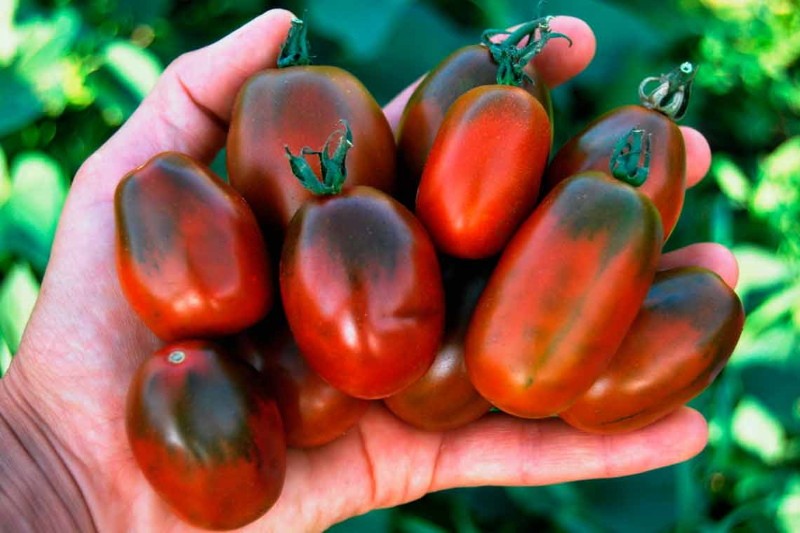 They look original in jars when preserved as a whole, have a sweet dense pulp and are well adapted to growing conditions. Black Moor tomatoes can be called an “amateur” variety. One of its main features is the very dark color of the fruit. Someone is delighted with the opportunity to make a multi-colored roll of small tomatoes for one “bite”. Others do not want to tinker with such a trifle, while others do not at all like such experiments with color. Whatever it was, but the variety exists officially and has been successfully and happily cultivated by amateurs for more than 20 years. What is special about it and why tomatoes have such a dual characteristic? 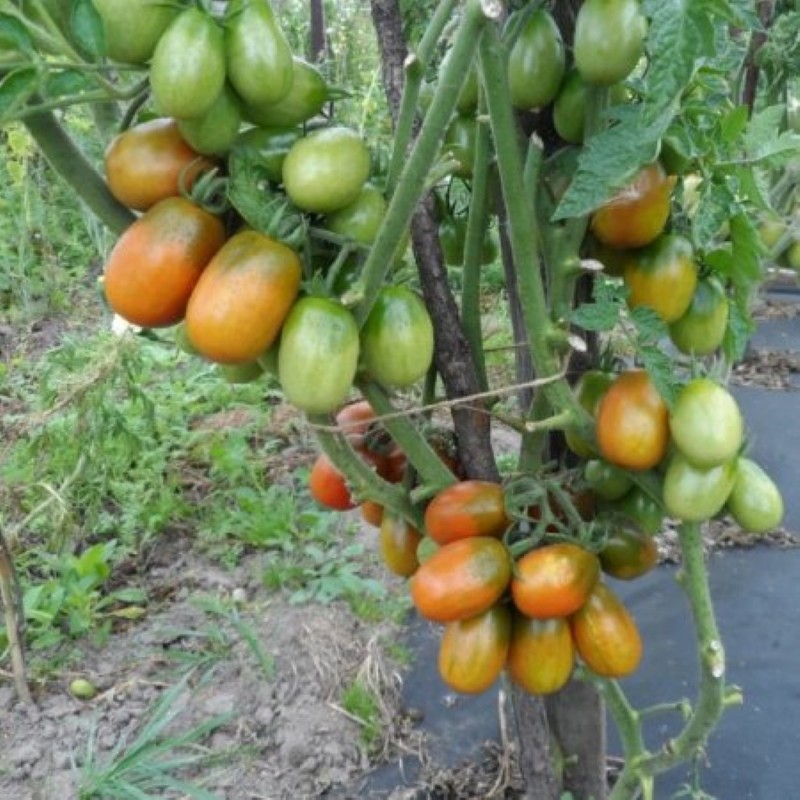 A mid-season variety ripens 120 days after germination and is considered indeterminate. However, having reached a maximum height of 1.5 m in greenhouses, the plants stop stretching upward as soon as they form up to 10 fruit clusters. The first brush appears after the eighth leaf, the next – after two, the internodes of the bush are shortened.

The variety can be grown in any region, it adapts perfectly to the climate in the open field. In cold climates, tomatoes are planted in greenhouses, where they simply grow taller than in beds in the sun, but retain their yield and taste..

Tall bushes need to be tied and formed into two or three shoots. Despite its resistance to fluctuations in temperature conditions, the Black Moor is not protected against diseases of the culture. It also does not have a resistance to drought, which spoils the fruit with damage to the top rot.. 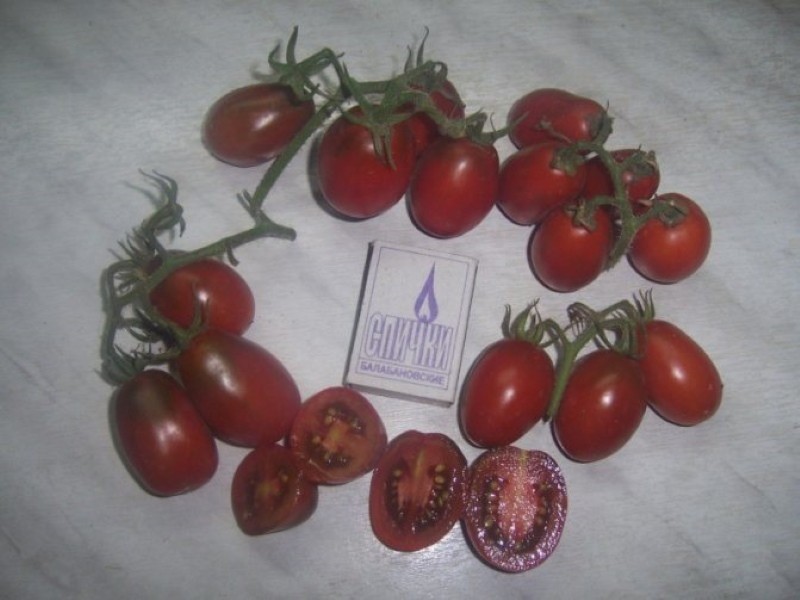 The variety is characterized by stretched fruiting. Tomatoes on the same bush do not ripen all at once, so at the same time there can be fruits of different colors. The yield of the Black Moor has average indicators – no more than 6 kg of fruits per 1 sq. m., but this is also not bad.

The tomato got its name for its unusual color – fully ripe tomatoes are red-brown in color, and at dusk they are completely black. They are small, weighing up to 50 g each, but of a beautiful even shape, like an egg. Each brush is tied from 6 to 10 pieces. A very fleshy, sweet and juicy flesh is hidden under the dense skin. There are few seeds in the fruits, because there are only two seed chambers in them. The variety is considered universal – small fruits can be preserved whole, because they do not crack. Fresh tomatoes are also good, and if you are not afraid of the dark color, they make a sweet thick tomato juice.

In appearance and color of the fruit, the Black Moor tomato is very similar to the De Barao variety, also with almost black small tomatoes. However, the latter grows even higher, moreover, it matures later.. 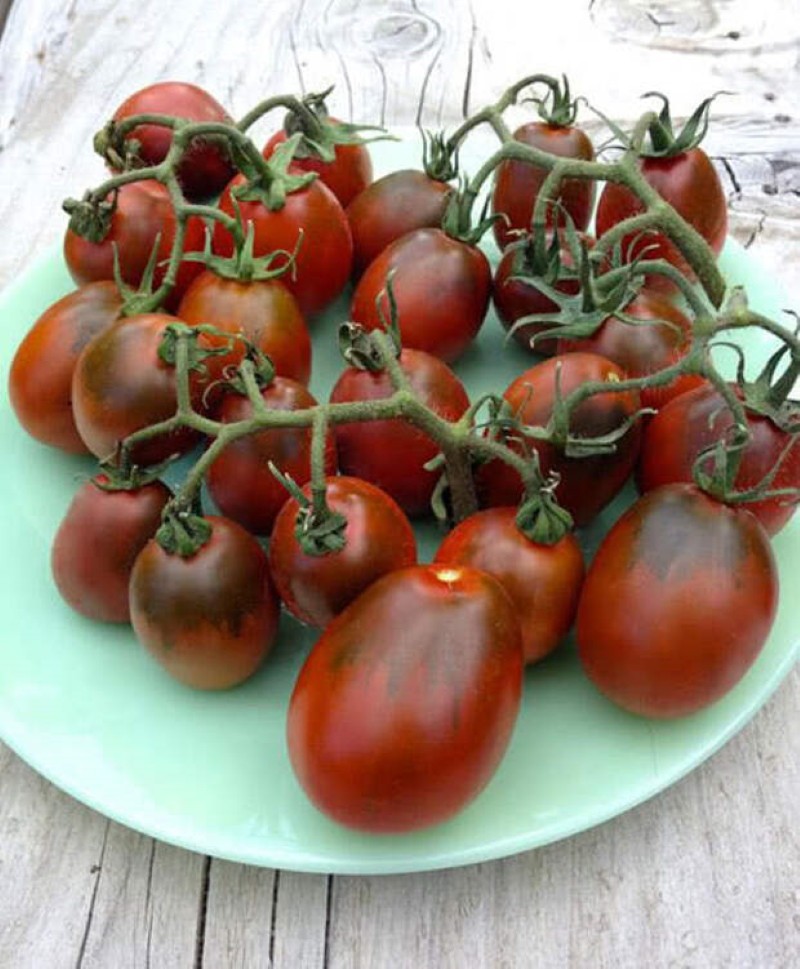 Among such dark varieties, Black Moor tomatoes are distinguished:

However, the variety also has many disadvantages, because of which many gardeners do not risk planting it. First of all, this is the lack of immunity to fungal diseases and the negative effect of drought on the fruit. In addition, not everyone is satisfied with such small tomatoes, even if they are delicious. And tall bushes will have to be tied up and shaped.