We fight against rhizoctonia or black scab of potatoes

Please tell me how to deal with potato rhizoctonia disease. From year to year, black growths appear on root crops, we simply do not know what to do, even if you don’t plant them. What could be the cause of this disease and how to get rid of it?

Black scab of potatoes is one of the main and most dangerous enemies of this root vegetable and gardener. It not only spoils the harvest, reducing its quantity and quality, but also makes it impossible to harvest home seed material. To defeat potato rhizoctonia disease (as the disease is called), it is important to know what causes it and what conditions are favorable for development.

The “culprit” of rhizoctonia 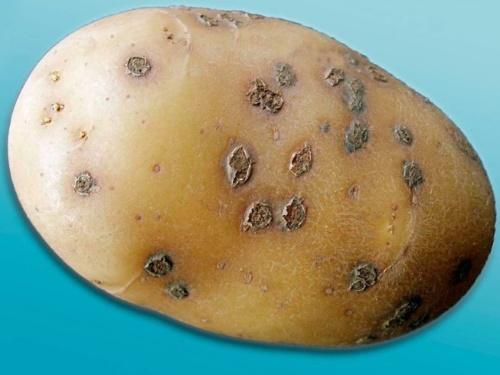 Black scab is caused by the parasitic and highly viable fungus Rhizoctonia solani Kuehn. It is noteworthy that potatoes are not the only crop he loves. The parasitic fungus is able to have other hosts, both among garden crops (nightshade, pumpkin, cruciferous) and among weeds (field horsetail and sow thistle are especially preferred).

Spores of the fungus winter well in the soil for 4 years, and in wet and cool weather they begin to actively develop, while the heavier and poorer in organic matter the soil, the better they feel. Also, the parasitic fungus persists on the tubers themselves, leading to damage to the crop during storage and further infecting seedlings.

You can eat infected potatoes, but in no case can you use them for reproduction..

How to tell if a potato is sick? 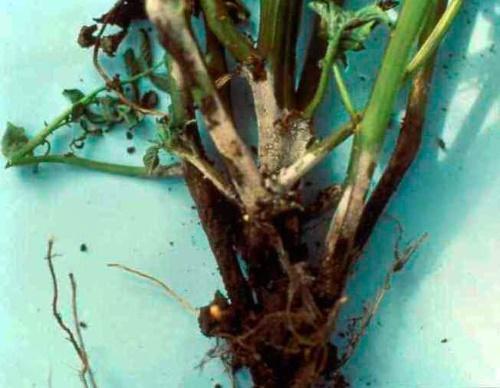 Black scab threatens potatoes at all stages of the growing season. Depending on when this happened, it is possible to determine that the culture is infected by the following signs:

The fight against rhizoctonia is mainly in preventive measures aimed at preventing the creation of favorable conditions for the development of the fungus. This requires:

If tubers with black scab are found in homemade potatoes, it is better to completely change the seed next season, acquiring varieties that are resistant to this disease.

Video about how potato rhizoctonia disease manifests itself on young bushes