Tell me how to treat the verticillary wilting of strawberries and is it possible to save it at all? I noticed something strange in the spring, when the bushes were already blooming – the leaves began to dry. The weather was hot, so I decided that there was not enough moisture. But watering the situation did not change, even, in my opinion, it became worse – the berries were almost all rotten. Realizing that I have nothing to count on the harvest, I processed the strawberries with Fitosporin. As a result, by the fall, almost all of my plantation had dried up. Is there a chance to save at least these remnants, maybe to process something back in the spring? The variety is good, large and sweet, I would like to keep. 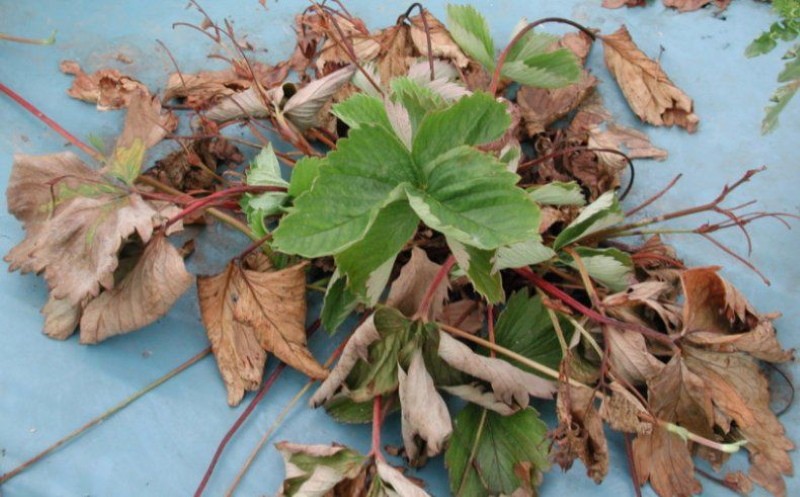 Every gardener is periodically faced with various diseases of strawberries and other berries. Wet weather, cold summers, fungi and viruses – there can be many reasons and it is very difficult to insure against all of them. But the most dangerous and complex disease is strawberry verticillary wilting. Moreover, it is dangerous not only by the affected area, which can go much further, beyond the berry. First of all, the fungus is dangerous in that it is impossible to notice it at the initial stage, which means that it is impossible to react in a timely manner. Only when the disease affects the aboveground part, it becomes clear that the culture is sick. But it is also difficult to determine what exactly, because similar signs and in fusarium. The culprit is the very viable fungus Verticillium albo-atrum. For many years (up to 15), its spores can be in the ground and wait for favorable conditions to begin to develop. But when this happens, the fungus enters the plant through the root system, from the inside. Growing up, it destroys the tissues that feed the aerial part, while releasing toxic substances. This leads to the complete destruction of plants. But even after the death of its, so to speak, epiphyte, verticillium continues to live. He hits the ground again and everything repeats again.

At the initial stage, when the fungi only penetrate the roots, and it would still be possible to save the strawberries, it is impossible to detect the problem. External signs appear closer to the harvest season:

How and how to treat strawberries from a dangerous fungus 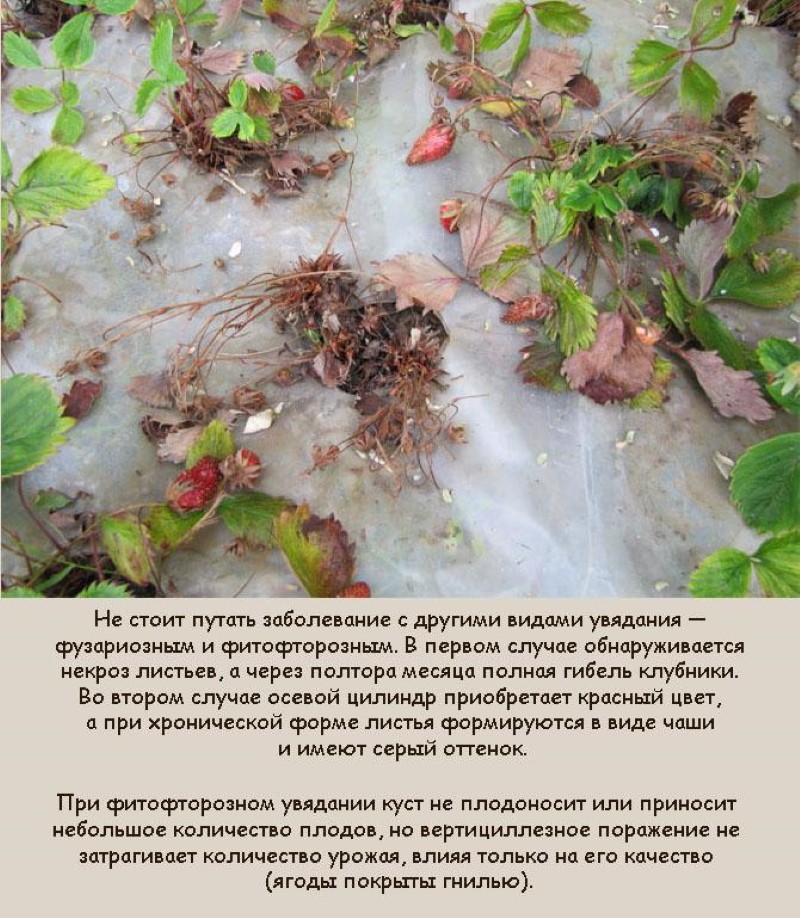 At a stage that is already visible to the naked eye, it is no longer possible to save the culture from the fungus. And before, as you remember, it is also impossible to notice the disease..

The only correct solution is to dig up and destroy the affected bushes. Plus, it is imperative to treat the soil after them with fungicides, because the fungus remains in it.

Biological products Trichodermin, Fitosporin can be used against wilting. With them, you can treat the plants themselves before flowering or for the purpose of prevention. From a “serious weapon” soil and strawberries are treated with Maxim or Bordeaux mixture in early spring or autumn.

To prevent verticillary wilting, plant only varieties that are resistant to this disease. For example, strawberries Vima Zanta, Lambada, Figaro, Mize Schindler and Tsarskoselskaya.

To prevent fungal disease, remember to transplant strawberries every 4 years. Avoid waterlogged areas, and do not plant berries after tomatoes, melons, peppers, potatoes.

Signs of verticillosis on strawberries