How to open wine without a corkscrew beautifully and quickly 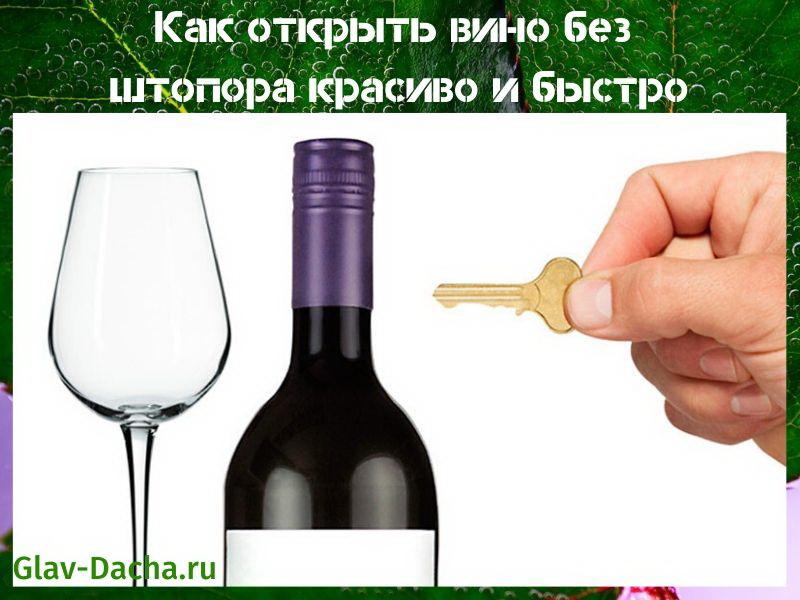 Do you urgently need to deal with a harmful cork that does not want to get out of the bottle? Now you will learn how to open wine without a corkscrew, only with improvised means! There are many great ways that people have developed over the centuries. Some are simple, some are difficult. There are also unusual.

Leaving for a vacation in nature, have you forgotten the corkscrew at home? Look around and you will surely find many interesting ways to open wine without a corkscrew.. 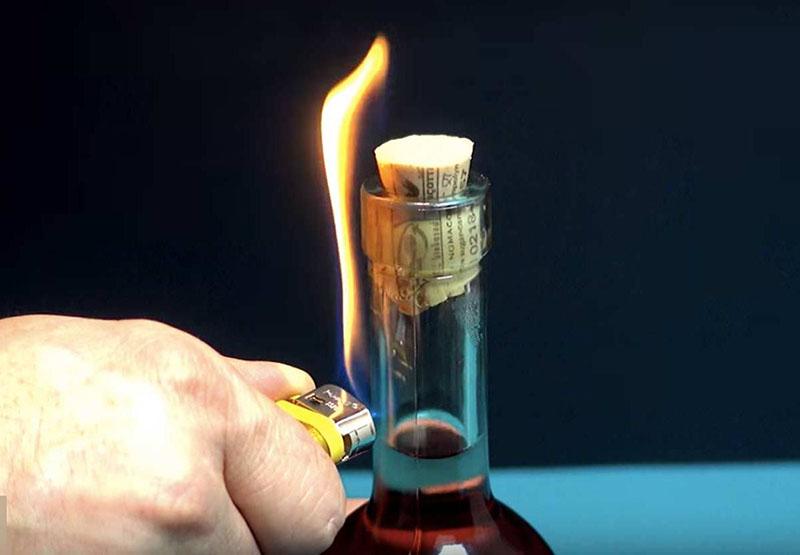 A simple and effective way. Be sure to unseal the neck of the bottle. Turn on the lighter and heat the glass where the cork is sitting. If there is someone else nearby, you can use additional lighters. After a while, the cork heated by the fire will climb out by itself. Then she’ll shoot like champagne.

Allow the neck to cool before pouring the wine. Otherwise it may crack..

Opening the wine with a knife 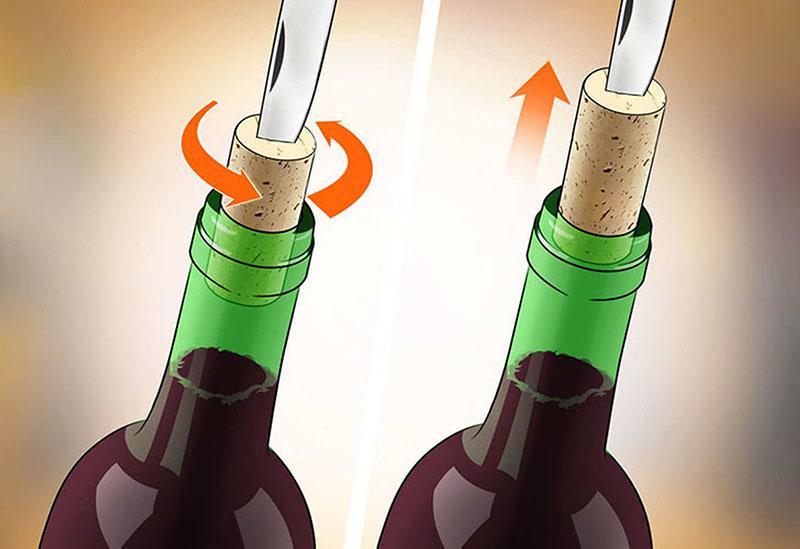 Need a knife with a narrow blade. Better if it is serrated. But the usual one will do too. Only he has to be sharp.

First, push the cork into the bottle a little. You can use your finger or some other handy object. Then, at a slight angle, stick a knife into the cork, approximately to its middle. Crank your implement slightly in one direction and pull out the plug.

Use a knife and fork

Insert a knife into the cork as described above. Start pulling it towards you little by little. When the plug comes out a little, pry it off the side with the tines of the fork and continue to pull it out. Using a fork will speed up the process.

How to open wine without a corkscrew using lipstick 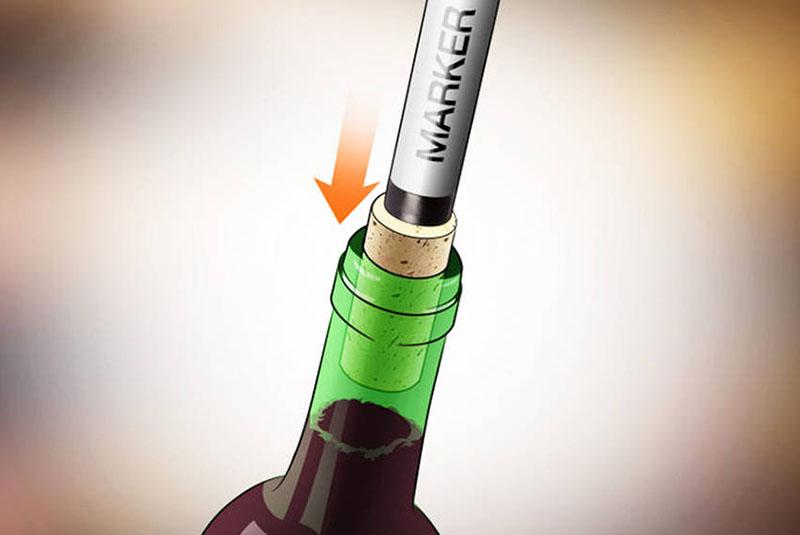 This method is more suitable for girls, albeit strong enough. Simply place the closed bottle over the stopper and press down. In the end, the latter must fall inside, into the bottle. Make sure the neck of the bottle does not taper downwards.

The lipstick can be replaced with other items of a similar shape. For example, a marker or felt-tip pen.

Opening the bottle with a key 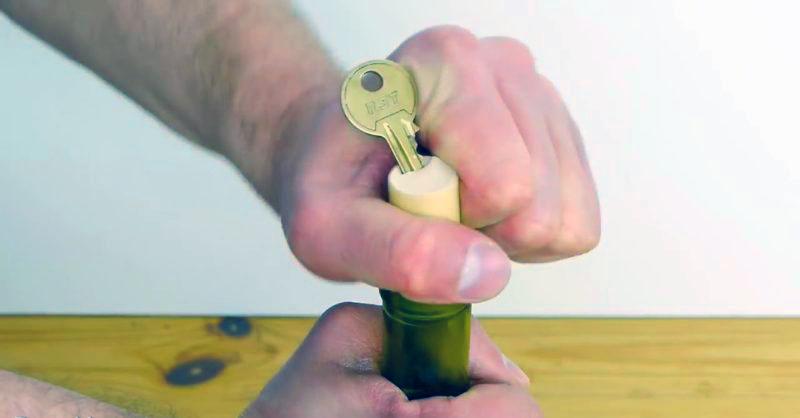 Any key with a thin, non-flaring tip will do. For example, from a mailbox. The key must be inserted into the edge of the cork at an acute angle of about 45 ° for ¾ length. Rotate it gently and pull out the plug. 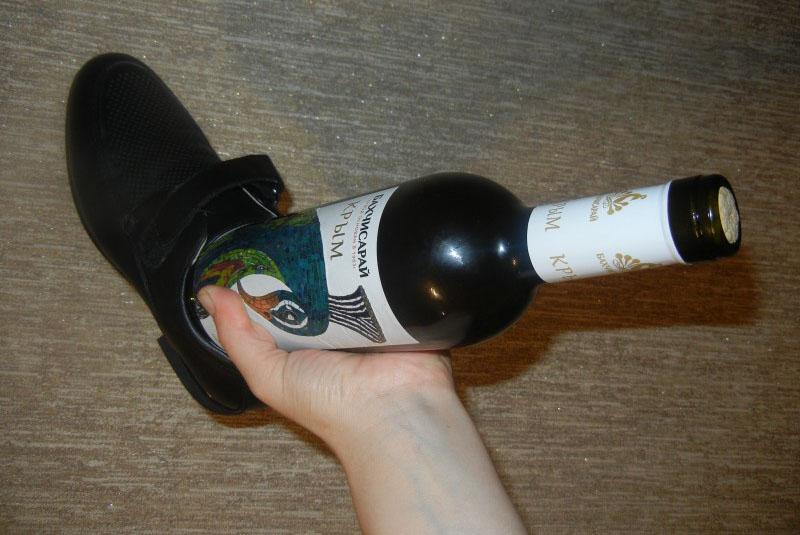 Sometimes in this way it is possible to open the bottle in literally 5 seconds..

Shoes with high or pointed heels will not work.

Take off your shoe, put it on the bottom of the bottle. Hit the resulting structure with the sole on the wall several times. The cork will start to crawl out and then fly out. Just be careful not to spill the wine!

Now you know how to open wine without a corkscrew in a few simple ways. But there are interesting more complicated options …

In the men’s arsenal of a motorist, there is always a simple tool with which he will open a bottle of wine at the right time:

If the cork has crumbled and particles got into the wine, wait. The particles will get wet and settle to the bottom..

Do the listed methods seem too boring? Nothing, you can replenish your arsenal with more non-standard.

When a corkscrew is lost at home, then in addition to the above methods, you can use several more interesting options:

With … the knife again! Just stick a knife into the cork and cut it into two vertical halves..

How to open wine without a corkscrew in hussar style 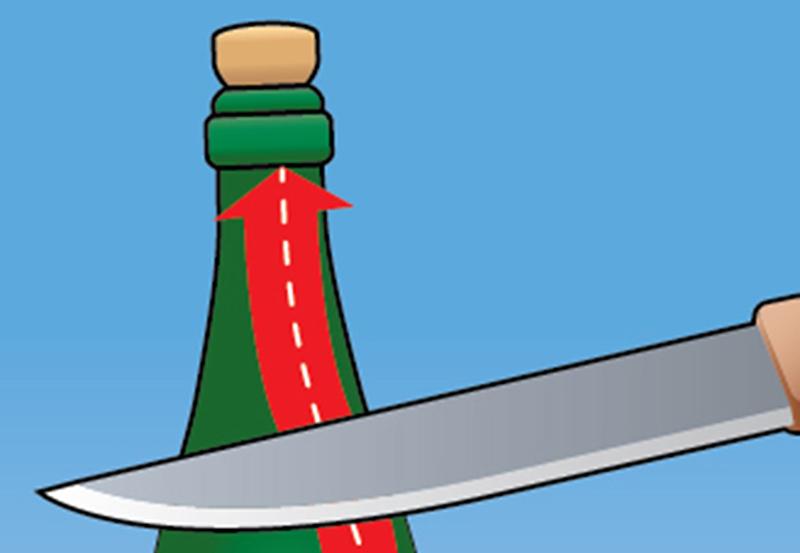 It is worth noting separately the hussar way of opening sparkling wine. The bottle should be slightly chilled, but not frozen. You need a knife.

Each bottle has two seams. Feel for them. The intersection of the seam with the neck is the weakest point. Hit it with the back of the knife blade. If hit, the neck will fly off and the wine will spill out like a fountain. The first try may not work..

Try not to miss, or you might break the bottle..

The method is dashing, but dangerous, so take safety measures:

That’s all. All that remains is … to congratulate yourself! You are well done. Now you can amaze family and friends at parties, intricately removing corks from wine bottles.

How to open wine without a corkscrew – video