Delicious pike baked in the oven for the festive table 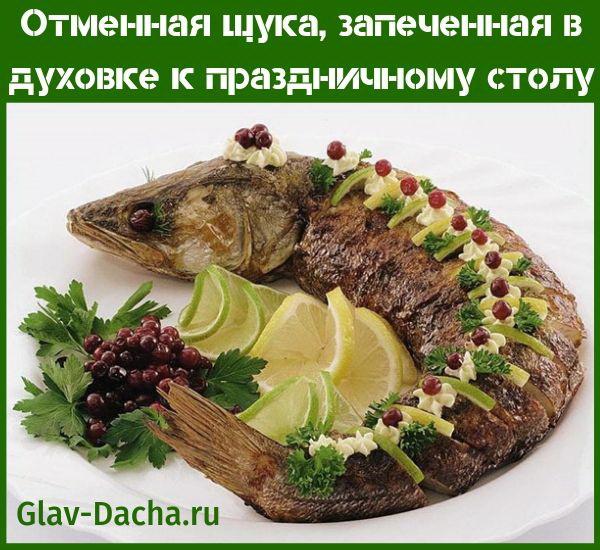 Receiving long-awaited guests, each hostess tries to prepare her own signature dish. Oven-baked pike has long occupied a special place on the festive table. It is unlikely that there will be those who refuse to taste this exquisite dish. The product contains a huge amount of useful elements. Easily absorbed by the body. Refers to low-calorie food intended for dietary nutrition. Therefore, having prepared such a dish for lunch or for guests, the hostess will be able to please even fastidious gourmets..

Whole pike baked in the oven 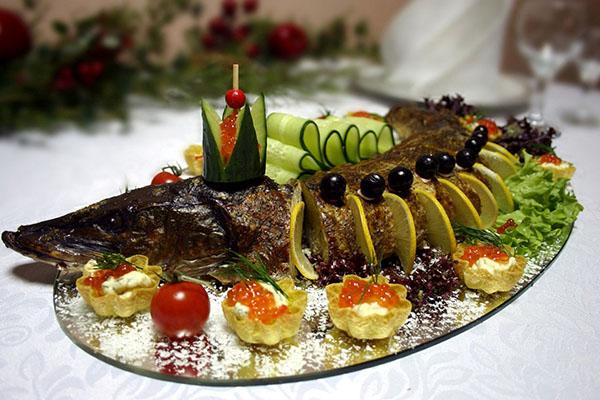 Let’s take a look at the easiest way to create a great dish..

To prepare it, you will need the following ingredients: 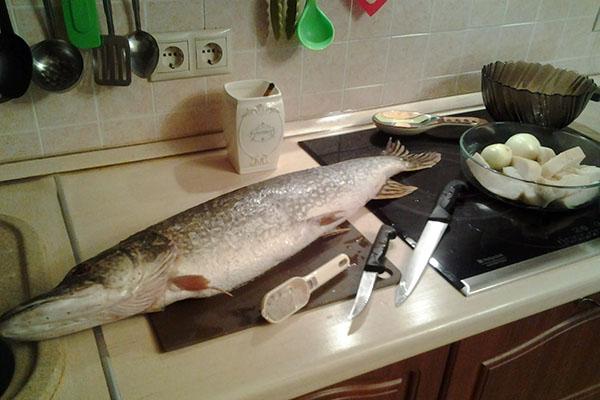 cook excellent pike baked in foil, wash it thoroughly under the tap. Then the insides are removed. The tail and spiny fins are carefully cut. The head is usually left. 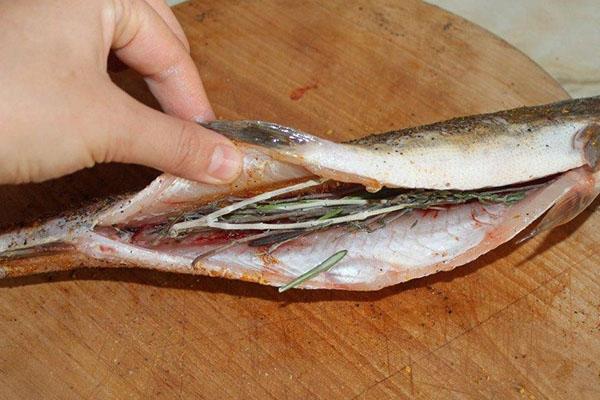 However, the gills are carefully cut with kitchen scissors. The cut carcass is washed again with water so that there is no blood on the meat..

The gills give the dish a bitter taste, so it is better to remove them..

The washed pike is placed in a bulky dish to remove moisture from it. After a few minutes, the back, sides and inside of the belly are rubbed with salt. Sprinkle with seasonings to add flavor. The fish is marinated for about 15 or 20 minutes.

A spacious baking dish is covered with foil. Spread the carcass on it and pour it with freshly squeezed lemon juice. Then smeared with sour cream or homemade mayonnaise. The fish is covered with a sheet of foil, and then sent to the oven. 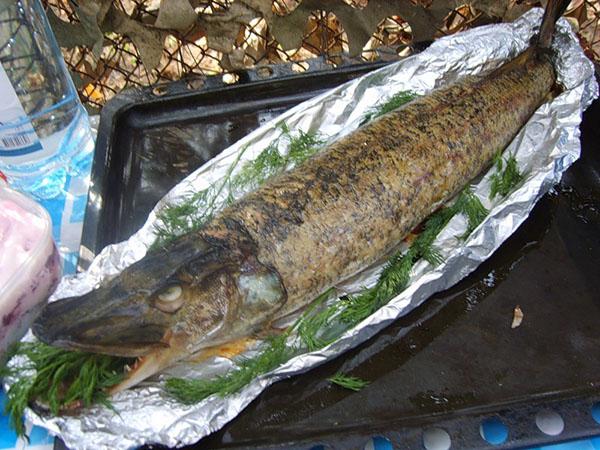 There are several rules on how to bake pike so that it is juicy and flavorful:

In order for a brown crust to form on the carcass, the fish is opened and baked for another 15 minutes. Serve the product on an oval platter. Decorated with chopped herbs or poured over with sour cream sauce.

Oven-baked pike is a hot snack. Therefore, it is advisable to serve it as a main course.. 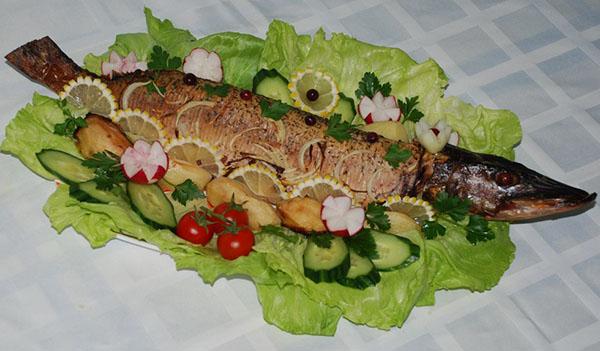 To give the pike an excellent taste, it is baked with various vegetables. Consider a popular recipe for such a dish.. 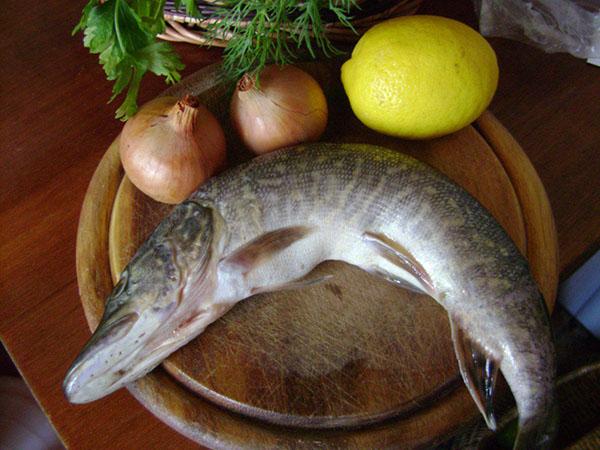 The secret of cooking 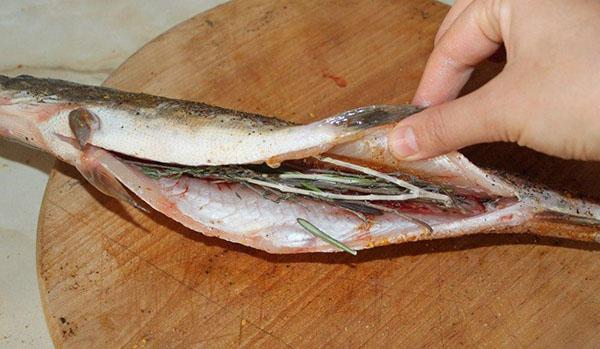 The fish is cleaned of small scales. Then remove: 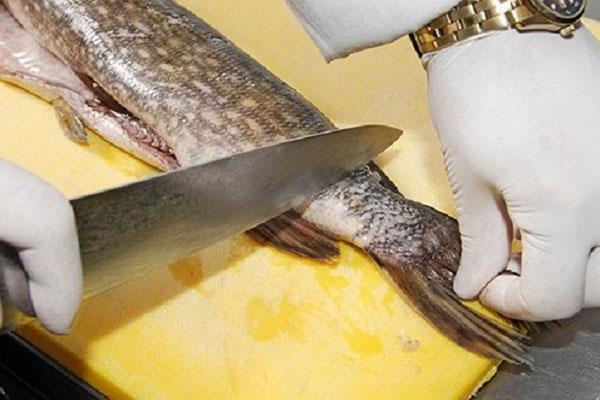 The carcass is thoroughly washed with running water. Horizontal and transverse cuts are made on it. This will make it easier to divide the finished meal. Rub the pike with salt and special spices. Pour lemon juice on top. Marinate for about 10 minutes in a deep bowl.

At this time, they work with vegetables:

The prepared products are stuffed with the river predator. Onion and sweet pepper rings are additionally inserted into the cuts. A sheet of foil is laid out on a baking sheet, on which the stuffed fish is placed.

The remaining vegetables can be laid out near the carcass, watering them from all sides with vegetable oil.

The food is covered with foil and sent to an oven preheated to 180 ° C. After about 50 minutes, the dish will be ready. To give the dish an appetizing look, some chefs make a golden brown crust. To do this, remove the foil and send the product to the oven for another 15 minutes. Stuffed pike baked in the oven is served on an oval plate. Garnished with chopped herbs and poured over with sour cream.

Fish in tandem with potatoes 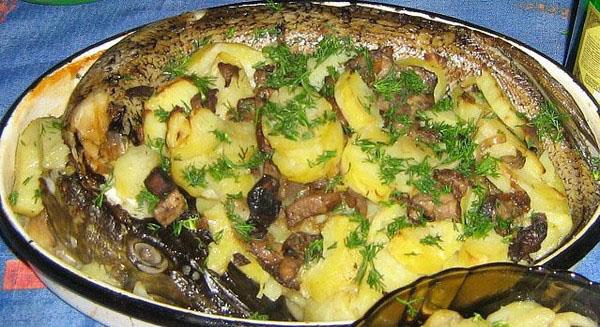 How can a hostess reduce the time she spends on preparing dinner? It’s simple – use original recipes. Consider one of them. 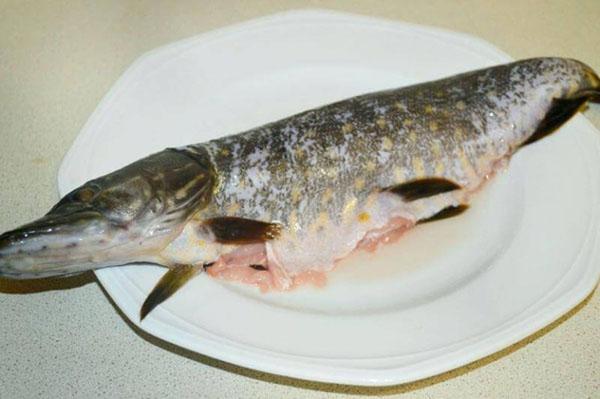 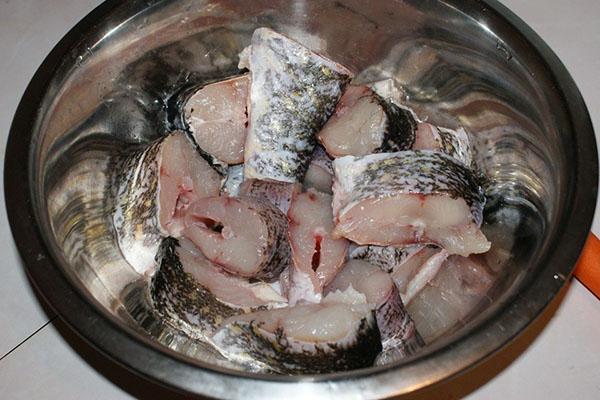 The cleaned and washed fish are divided into several pieces. Salted well and seasoned with spices.

While the meat is marinated, vegetables are prepared:

In a separate container, sour cream is mixed with lemon juice and salt. If it turns out to be a thick consistency, it is diluted with boiled cold water..

On a baking sheet covered with foil, lay out in layers:

Pour the ingredients over with sour cream sauce. Cover with foil and send to a preheated oven for about 50 minutes. To make a golden brown crust, remove the coating and bake for another 10 minutes. Serve oven-baked pike with potatoes and chopped fresh herbs.

Recipes and blanks
Previous Post
What do you know about the health benefits of hibiscus tea?
Next Post
Pear variety Autumn Yakovleva will decorate your garden and delight you with delicious fruits