French meat with potatoes for a large company 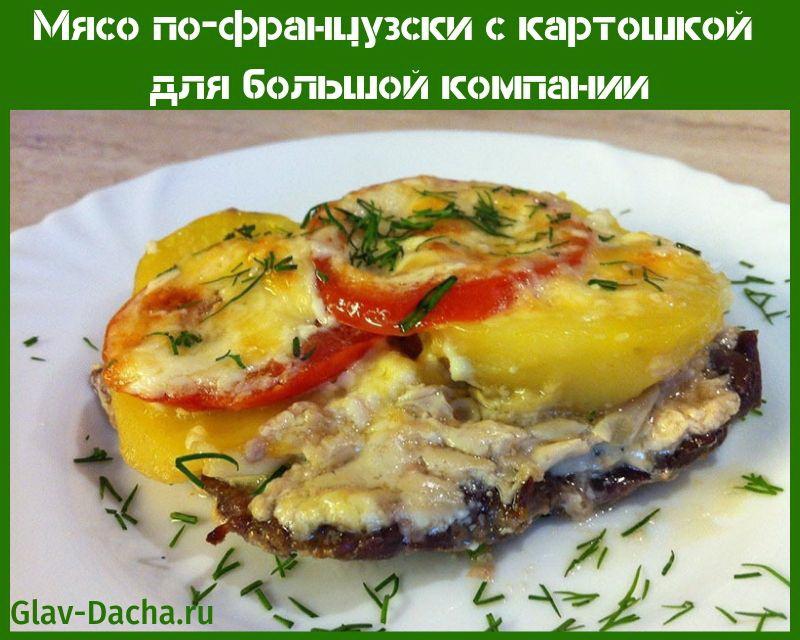 Guests on the way and don’t have time to cook the main dish? Make French Meat with Potatoes! A great option for both a festive and an everyday table.

A bit of history 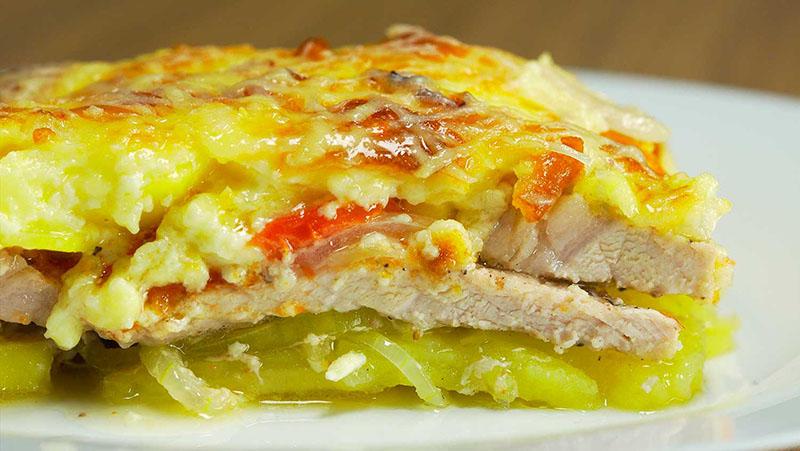 Despite its foreign name, this dish, like the famous Olivier salad, has Russian roots. With one exception: the meat retains more of the original recipe than the salad..

For the first time, the dish was served on the table in the 19th century. The creator is the chef Urbain Dubois. A Frenchman who served at that time to Count Alexei Orlov, for whom a treat was invented.

The cooking principle has remained unchanged. These are still layers of different foods, necessarily including meat and potatoes in the seed. Over time, the recipe has undergone some changes, various variations have appeared. The main feature has been preserved – gratin (gratin). This is the topmost layer, the golden crust of the cheese, which distinguishes baked meat from French-style meat with potatoes..

Interestingly, gratin used to be considered a delight. Shortly after the “opening” of the cheese crust, it was specially separated from the main course and served separately as a delicacy.

The original recipe for French meat with potatoes 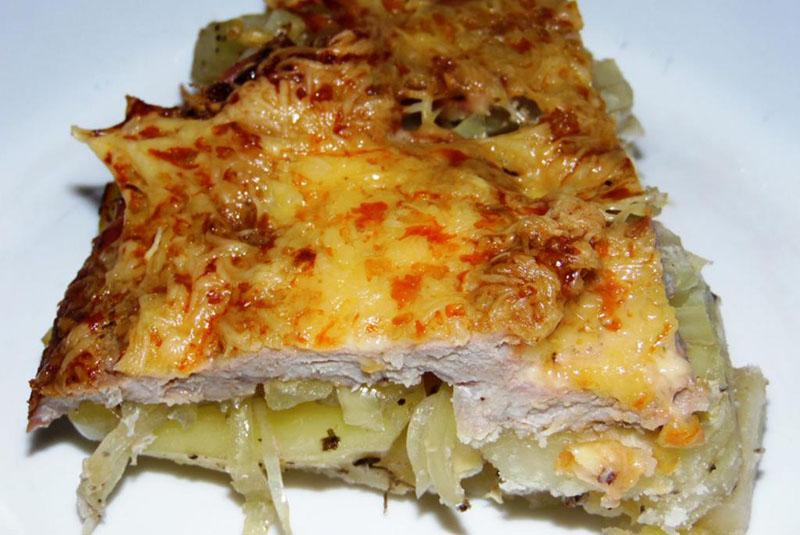 The original recipe is called “Orlovski Veal” and is somewhat different from the classic.

Wash the meat, pat dry with paper towels, leave to dry. At this time, bechamel sauce is prepared in a small saucepan.. 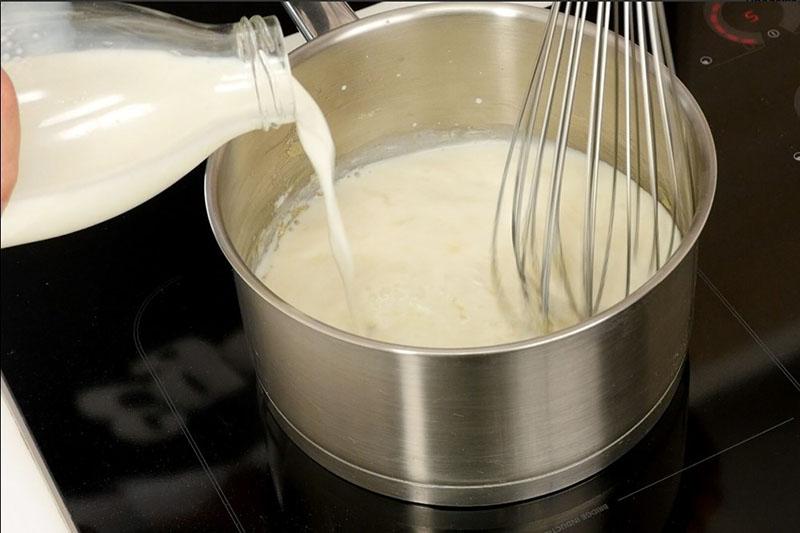 To do this, butter is heated over low heat, flour is added, and mixed. Milk or cream is gradually added.

The liquid must be poured in slowly, stirring constantly with a whisk..

Bring to a boil, add spices, after 5 minutes remove from heat. 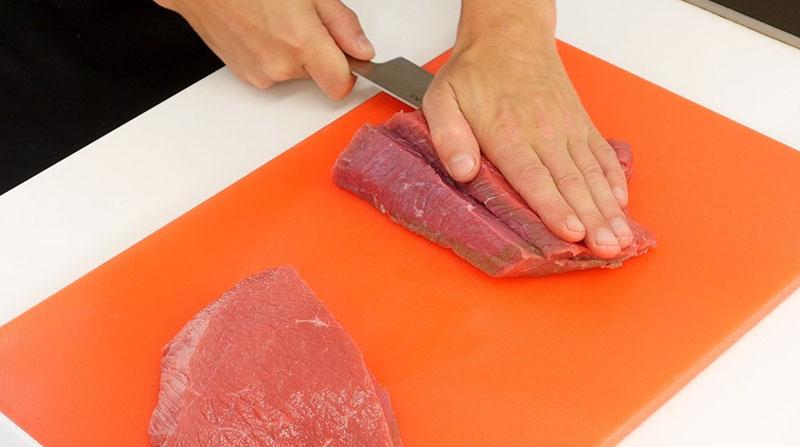 Cut the meat into slices. Season with salt and pepper to taste and lay the form with sides. The mold can be greased with butter or lined with baking paper. 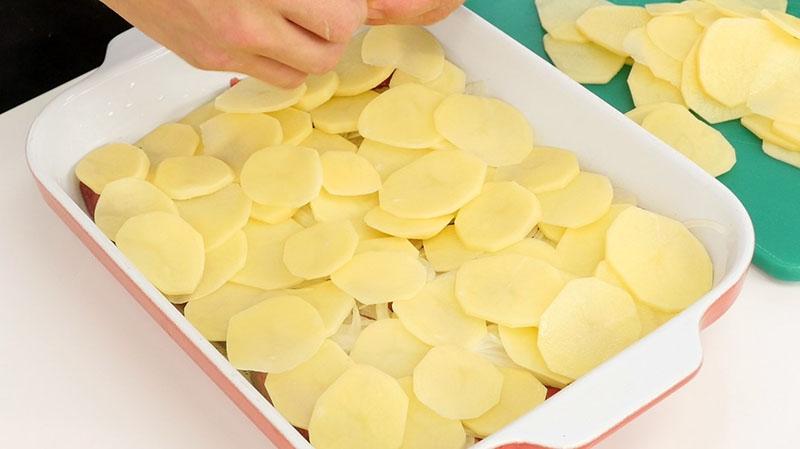 Wash and dry the champignons. Cut into slices, put on potatoes.

Each layer can be salted, pepper to taste. 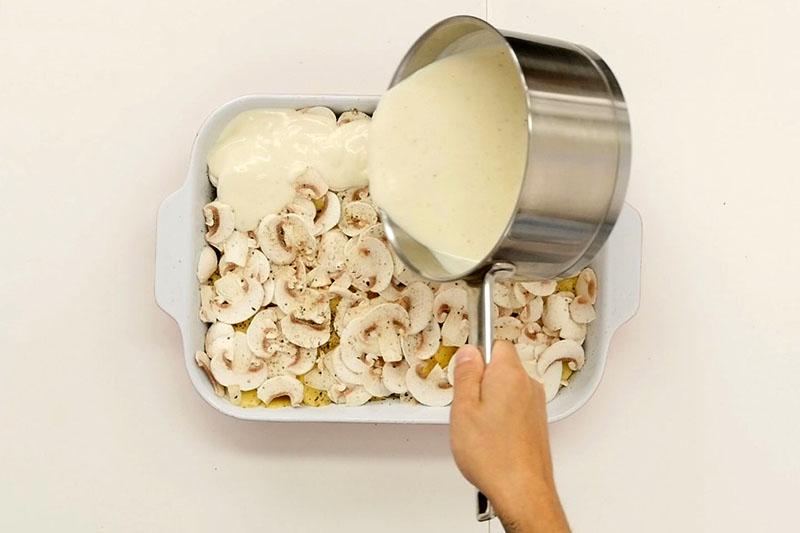 Pour the sauce gently over the contents of the form. Cover with foil. Put to bake in an oven preheated to 180 degrees. 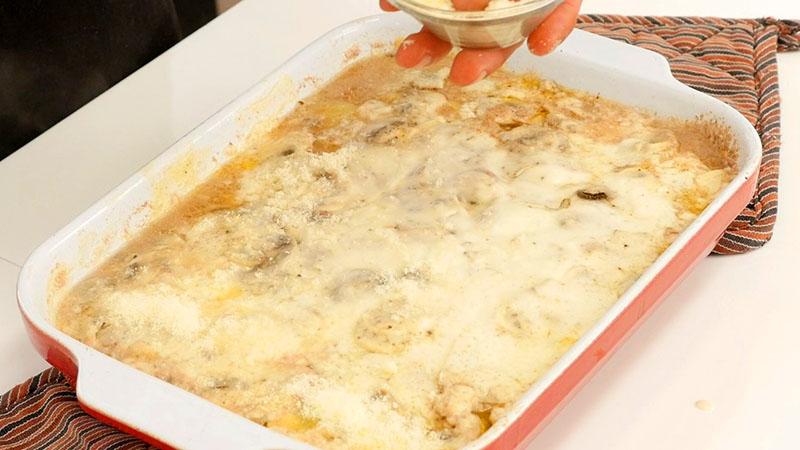 After 30-35 minutes, take out the dish, remove the foil, sprinkle with cheese and send back to the oven for 15-20 minutes.

You don’t have to rush to get the meat in French with potatoes and mushrooms, but leave it in the oven so that the dishes will “reach”. Serve hot. Cut like lasagna – in chunks without losing integrity.

The recipe for meat in French with potatoes, familiar to everyone, is quite a bit different from the original, but it is also easy to prepare.

When the cheese is browned, you can leave the dish for another 10 minutes in the turned off oven.

French meat with potatoes and tomatoes

Another popular variation of the dish is French meat with potatoes and tomatoes. Tomatoes provide additional juice, which soaks the potatoes with meat, adding tenderness to them.. 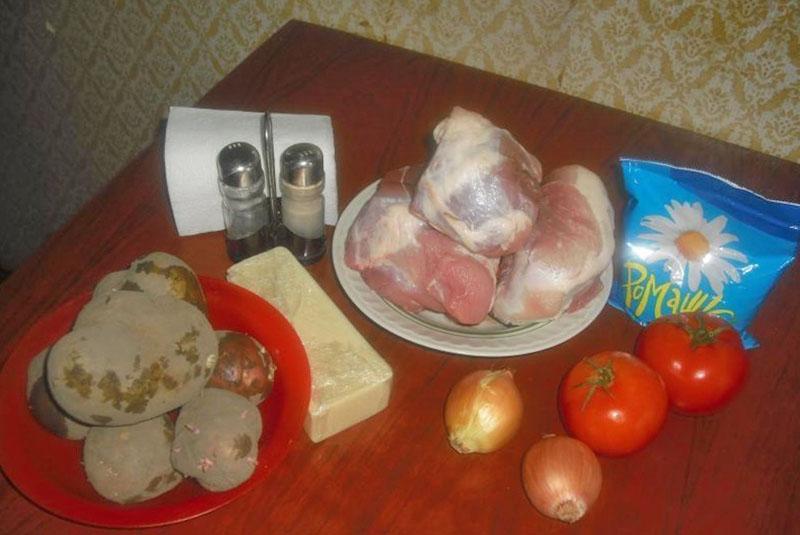 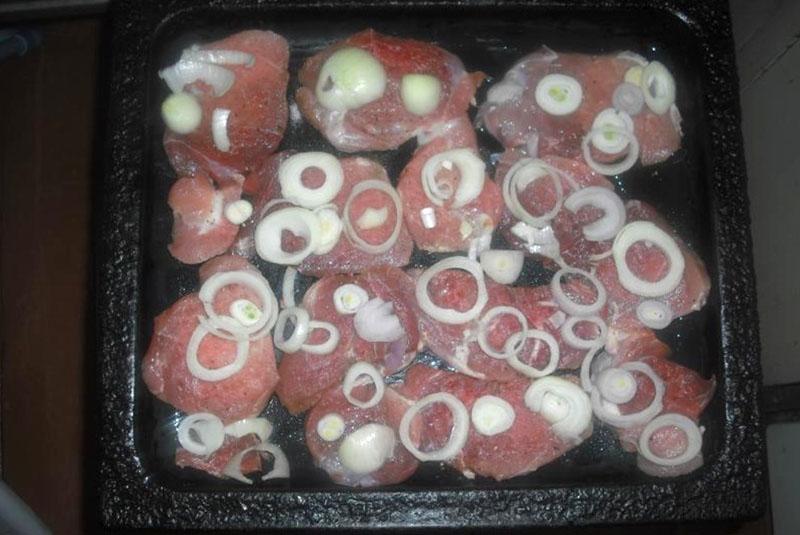 Wash the meat, cut into slices about 2 cm thick. For convenience, you can beat off each piece a little. Season with spices and place on a baking sheet greased with sunflower oil. Chop the onion, put on top of the meat. 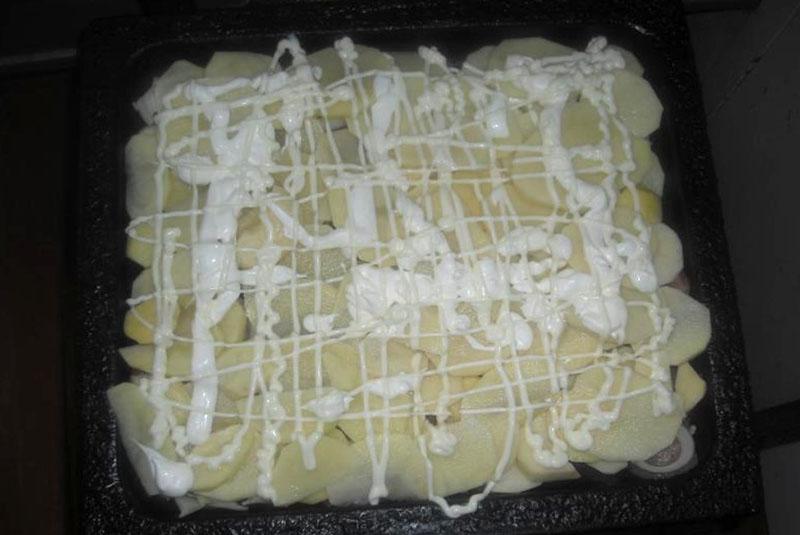 Then cut the potatoes, put on top of the onion, grease with mayonnaise on top.

In order for the dish to bake well, it is recommended to cut French-style meat potatoes into slices 0.5-1 cm thick. 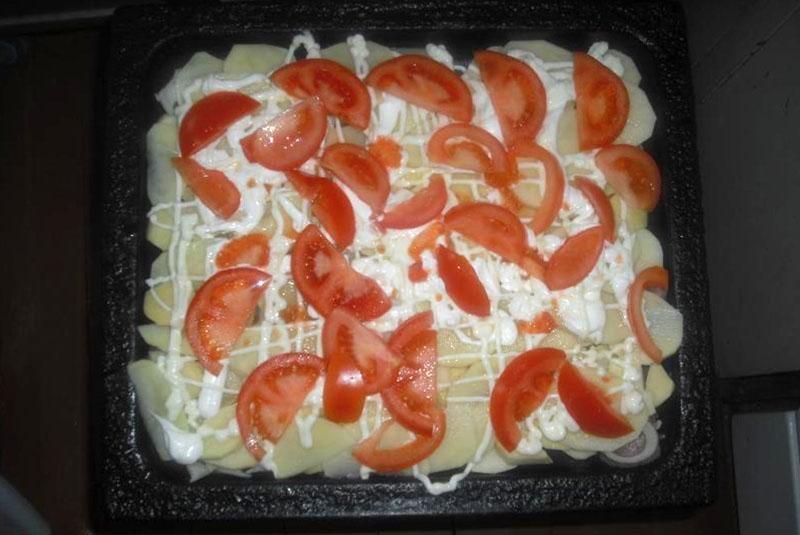 Chop the tomatoes, lay out and brush again with mayonnaise. Sprinkle everything with about half of the grated cheese. 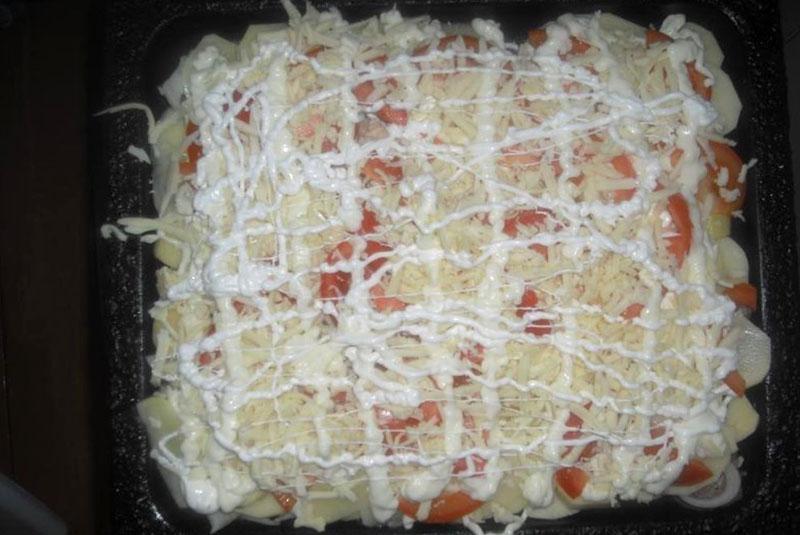 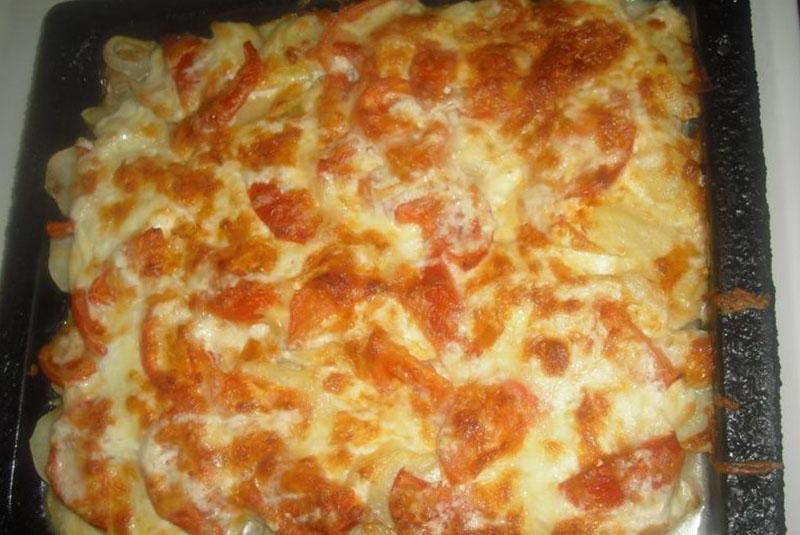 As with other variations of the recipe, 10 minutes before ready to take out the baking sheet, sprinkle with the remaining cheese and put back until fully cooked..

In order to slightly reduce the calorie content of the dish, instead of veal or pork, you can use chicken fillet. And replace mayonnaise or bechamel with Greek yogurt, kefir or sour cream with a low percentage of fat.

The exact baking time is determined based on the power of the oven. On average, this is 30-35 minutes, but it may take longer.

The beauty of cooking meat in French in the oven is that the recipe can be played up in different ways, by changing or adding new ingredients. Experiment!

Video recipe for meat in French