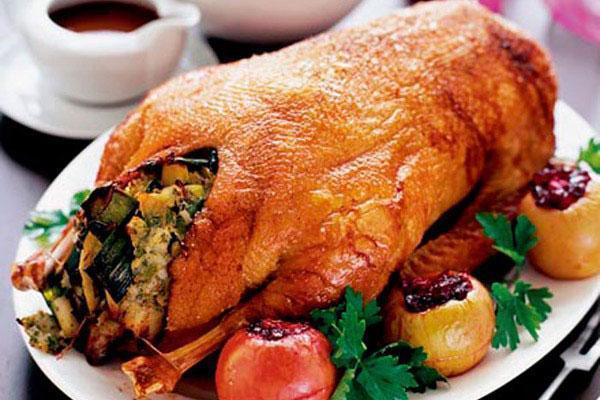 Each person tries to adhere to the traditions that he inherited from grandfathers and grandmothers. Culinary masterpieces are not the last in this business, especially the goose baked in the oven, which was prepared on major holidays. It is interesting that this particular bird was a favorite prey of ancient hunters. And when the goose was tamed, it became an irreplaceable dish on the festive table. Despite the heavy bones and thick layers of fat, the dish comes out with a unique taste. There are many different options for how to cook a goose baked in the oven for a festive table. Let’s consider some of them that have the widest application.. 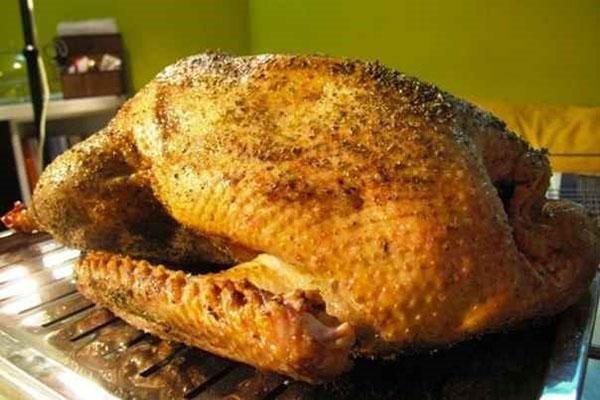 Some people think that baking a goose whole in the oven is very difficult, because in ancient times it was cooked in a special oven. However, enterprising chefs have refuted this misconception. Following useful advice and good tradition, an excellent goose baked in the oven may appear on the festive table. For the dish you will need:

At the very beginning, the meat is thoroughly washed. You can do this under running water or in a bowl, changing the liquid several times.. 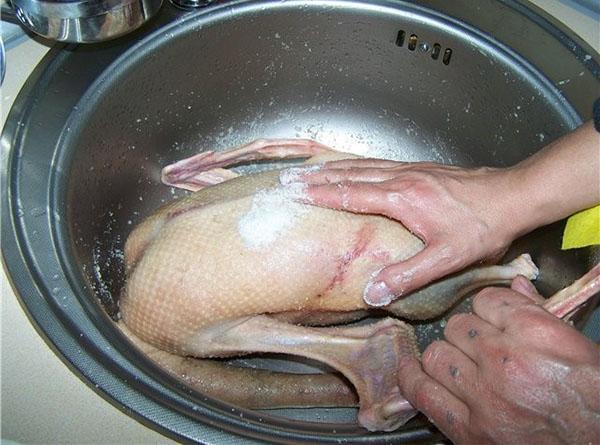 Then the salt is mixed with seasonings to generously grate the carcass outside and inside.. 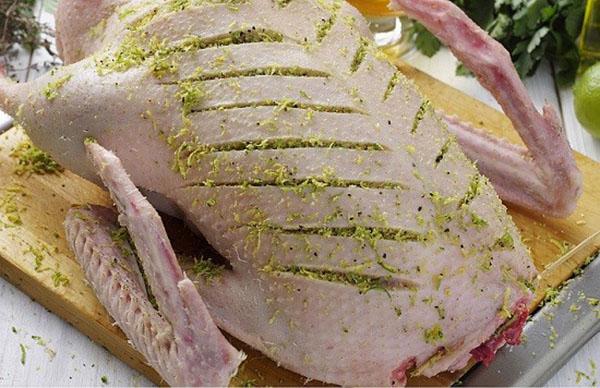 So that the meat is well saturated with spices, it is left for at least 4 hours. For the best effect all night long. As a result, the goose will have a crispy crust..

Each clove of garlic is cut in half, and each lemon is cut into rings. Then cuts are made throughout the carcass, where pieces of garlic with lemon are placed. A bay leaf, a sprig of sage and the remains of a lemon are placed in the abdomen. To prevent the carcass from losing its shape, a glass bottle is installed inside, after which the abdomen is sewn up. Even young chefs use this classic recipe with a photo of a goose baked in the oven to surprise parents.. 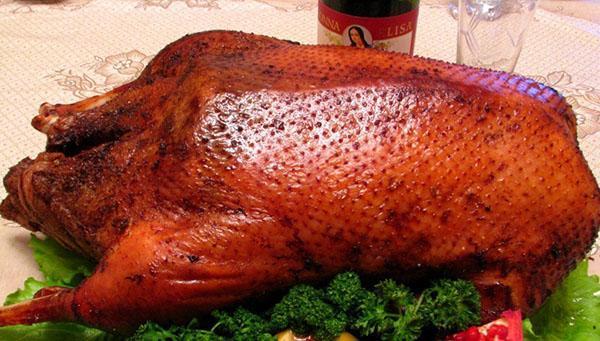 The baking dish is generously greased. Place the bird back up on it and put it in a cold oven. Then set the temperature mode to at least 220 degrees, and bake for a maximum of 3 hours. When the carcass is cooked, it is left in the oven for 15 minutes. The goose is served with mashed potatoes and sauerkraut in winter, and in warm weather with fresh herbs and salad.

Meat and apples are an inseparable couple of all time 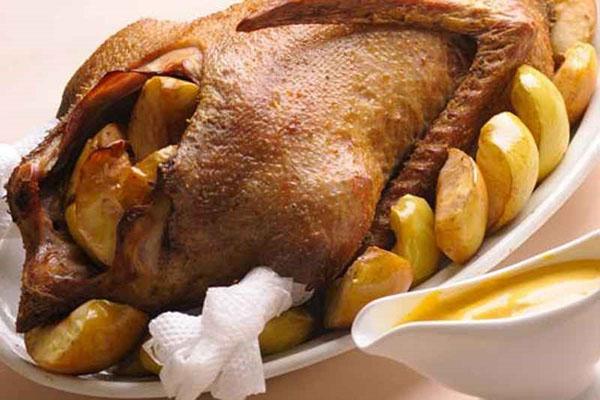 Cooking a goose with apples baked in the oven for an anniversary or a friendly meeting is a truly noble cause. After all, what could be better than delicious food and pleasant communication? For a traditional dish, take the following set of components:

Such a recipe for a goose with apples baked in the oven involves the following actions:

The goose should be placed in an oven preheated to 200 degrees. After 25 minutes, the fire is reduced to about 160 degrees, leaving this mode until the very end..

Juicy bird with apples in the sleeve 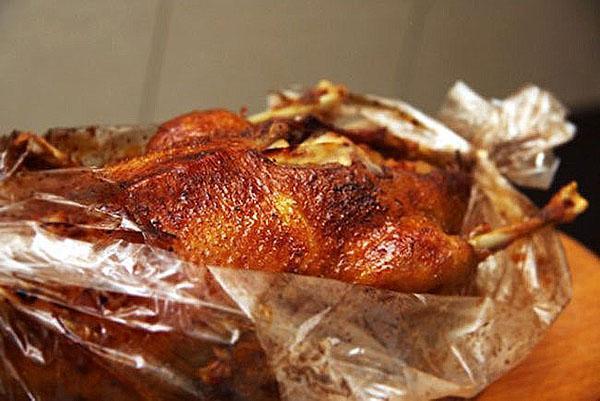 Some housewives like to treat friends to a goose with apples baked in the sleeve. Each of them has its own cooking secrets, but we will consider the traditional option.. 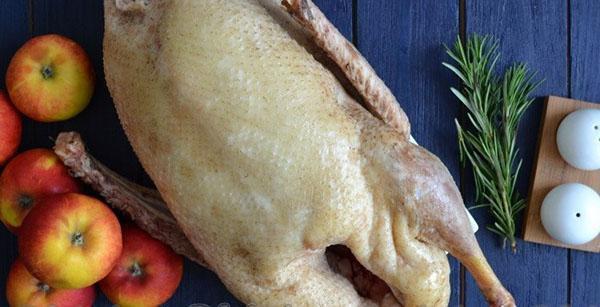 To eat, you need to prepare products:

The goose baked in the sleeve is cooked in stages, trying to follow the wise guidance.

First of all, it is thoroughly washed under the tap. Remove the remnants of viscera and meat films. If feathers are found on the carcass, it is poured over with a burner. The pads are pulled out with tweezers. After that, the goose is wiped off with napkins to proceed to the next stage.. 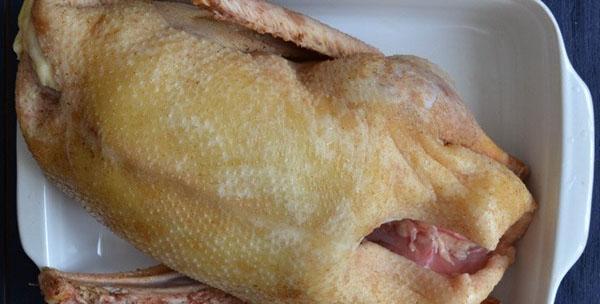 The whole set of spices is combined with the required amount of salt. Then rub the mixture into the carcass of the bird with massage movements of the hands, outside and inside the abdomen.

Apples are washed well and left to dry. Large specimens are cut into pieces, small ones are used whole. Then they stuff the abdomen of the bird, after which they are sewn up with thread. Put a branch of rosemary on top.

The meat is carefully placed in the baking sleeve and placed in the roaster. After that, preheat the oven to 180 degrees and send the bird there for 2 hours. 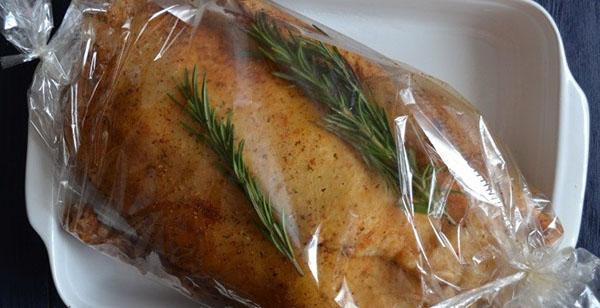 The finished dish is obtained with an excellent sweetish taste, complemented by an apple aroma..

After baking the poultry, a lot of fat mixed with apple juice remains in the sleeve. It can be used to cook potatoes. 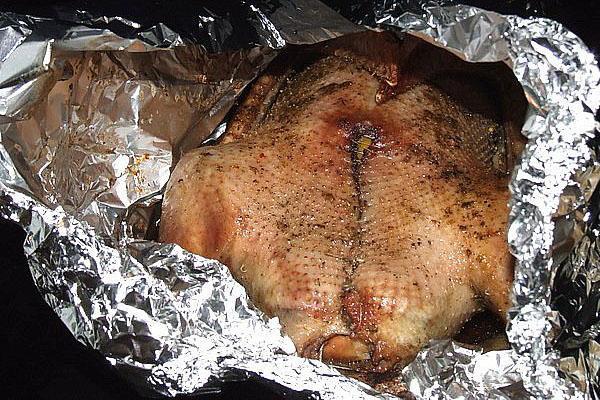 In order for the goose in foil, baked in the oven, to turn out soft and juicy, you should perform the following operations:

Serve with baked goose, mashed potatoes or pasta. Garnished with fresh herbs and washed down with homemade red wine.

Before starting to prepare the dish, the carcass is brought into a warm place. Only after an hour and a half it can be sent to the oven..

Video recipe for cooking a goose with apples