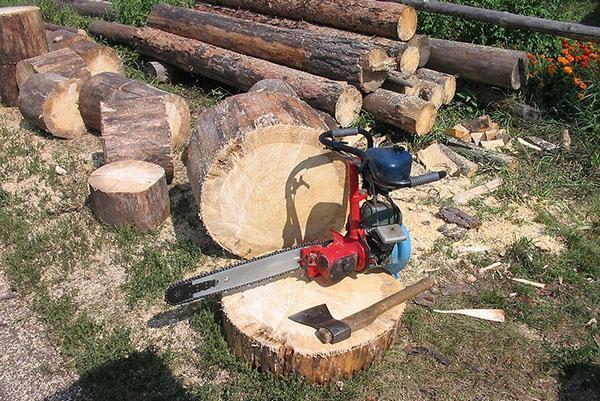 The first model of the Druzhba chainsaw was developed in 1953 and released in 1955. They were produced at machine-building plants in the cities of Biysk and Perm. All models of these chainsaws have an air-cooled, two-stroke, single-cylinder engine with a carburetor. Thanks to its convenient design and high productivity, Friendship is still in demand, and the saws of the first models are also in working order. The main purpose of the Druzhba chainsaw is felling and sawing logs.

Before operating any chainsaw, be sure to read the instructions from the manufacturer and follow all safety rules.

The general design of the saw did not change significantly over time, only individual parts were finalized. The number at the end of the model name indicates its power, for example, Friendship 2 – 2 hp. In the first chainsaw produced, the handles were attached to the fan cover, later they began to be attached to the clamp that connected the gearbox and the engine. In the 4A model, produced before the 80s, a contact magneto and a KMP-100 carburetor were already used. Automatic chain lubrication was also introduced for the first time. Later it was discontinued and the 4A-Electron model with electronic ignition began to be produced instead.. 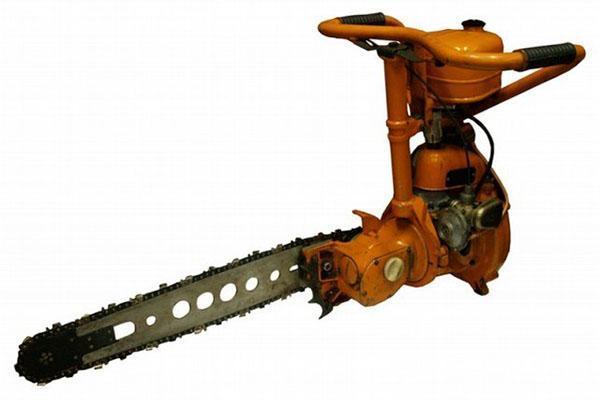 In the 90s, the old carburetor was replaced with a new KMP-100U. The chain saw became known as Friendship-4M and was equipped with updated chains. On the basis of the Druzhba chainsaw, the Ural saw with more powerful characteristics was developed. The last produced model with a similar design is Druzhba 5E.

Additional marking with the letter E or the word “Electron” means that an electronic ignition system is used in the chainsaw. 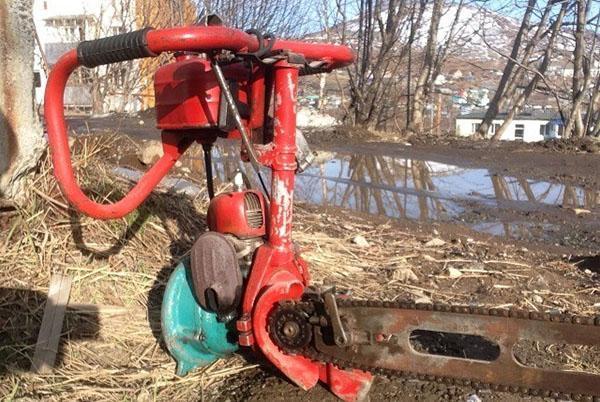 This model became one of the most popular of the entire original series. The Druzhba-2 chainsaw operates due to a two-stroke single-cylinder engine with a power of about 2.2 kW and a rotation speed of 3200 rpm. Compared to the previous version, this one was performed more efficiently. The frame and handle are designed to prevent the user from getting burned by the hot engine. The case is made of high quality alloy that is not afraid of temperature extremes. Unlike the first model, this one already has a mechanical chain brake for safe use. In the event of a rebound or break, it will stop the chain. The saw was intended both for household needs and for professional felling. Weight 12.5 kg. 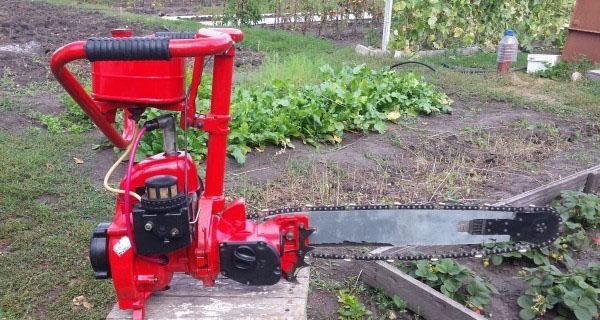 The friendship 4 chainsaw uses the same engine as the previous model, but more power – 4 hp. or 2.94 kW. The engine and power unit are installed using a flange connection secured with a yoke. The engine, if necessary (repair, replacement), can be easily removed in any conditions. On the basis of the Druzhba 4 saw, two modifications were made with markings 4A and 4E. The first included an automatic chain lubrication system, and the second used electronic ignition. The shortcomings of previous models were also taken into account, for example, the crankshaft bearing was reinforced. All versions were produced with an emergency braking system.

In the chainsaw friendship 4M-Electron, a similar engine with a power of 2.94 kW and a rotational speed of 5200 rpm is used. The cylinder is made of aluminum alloy, and the inside is chrome-plated for increased wear resistance. Unlike earlier versions, this chainsaw is equipped with a rotary gearbox, which allows the saw unit to be rotated 60-90 ° for more convenient operation. The weight is evenly distributed throughout the body for maximum comfort. There is also a vibration damping device located between the steering wheel with handles, struts and the gas tank. 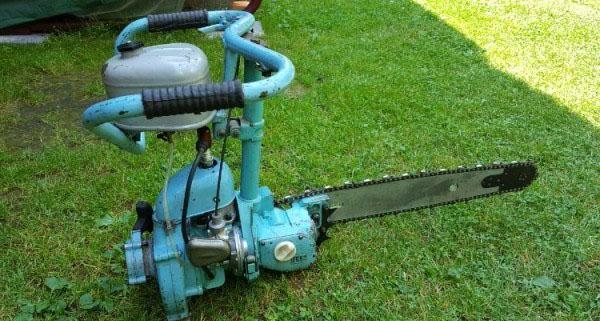 To reduce the noise level, the saw is equipped with a silencer, and the noise level is 106 dB. A KMP-100U or KMP-100-AR carburetor is installed in the Druzhba 4M-Electron chainsaw. There are systems for automatic braking and saw chain lubrication. Weight 12.5 kg. 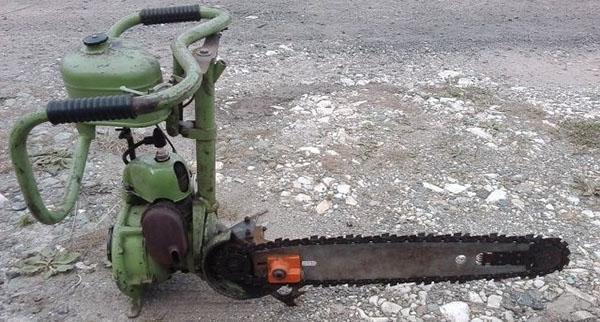 The latest released version of this series of chainsaws. Equipped with a 2-stroke single-cylinder engine with a power of 5 hp. or 3.7 kW. Thanks to this, its performance is noticeably higher than that of previous models. Rotation speed 6200 rpm. At the same time, the level of the emitted noise is slightly lower than that of Druzhba-4M Electron, and amounts to 105 dB. The weight of the 5E chainsaw is 800 g less – 11.7 kg.

The main drawback is the large weight. Also, due to the fact that the starter is removable, it is often lost, and there is no Stop button.

Do not use leaded gasoline as fuel and do not run the saw in an enclosed space.. 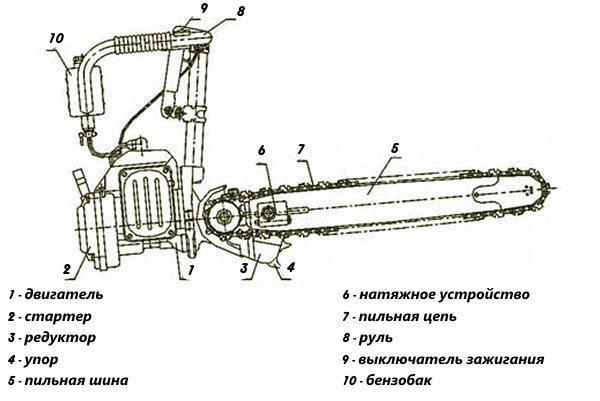 Thanks to the simple design, the repair of the Friendship chainsaw can be done by hand. So, for example, in saws of this brand, problems with ignition often arise, especially if a contact is installed. It is extremely sensitive to various oils and gasoline. Therefore, it is better to purchase electronic ignition instead. Moreover, spare parts for a friendship chainsaw contact are expensive and irreplaceable.

If the candles are heavily flooded, then you should pay attention to the carburetor. In this case, it is necessary to slightly bend the petrol valve inward, as a result, the amount of supplied fuel will decrease and the candles will stop getting wet..

The carburetor is also easily adjustable:

To prevent air from being sucked into the system from the outside, all seals must be tight.. 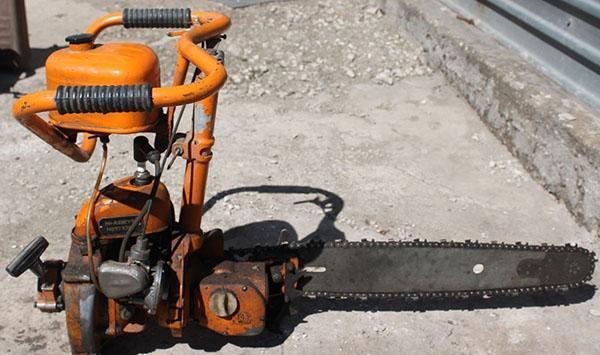 Compared to other models of the Druzhba chainsaw, it is sold for a lower price, due to the small number of functions, but it has excellent quality and a long service life, which imported models cannot boast..

The main malfunctions of the chainsaw Friendship – video