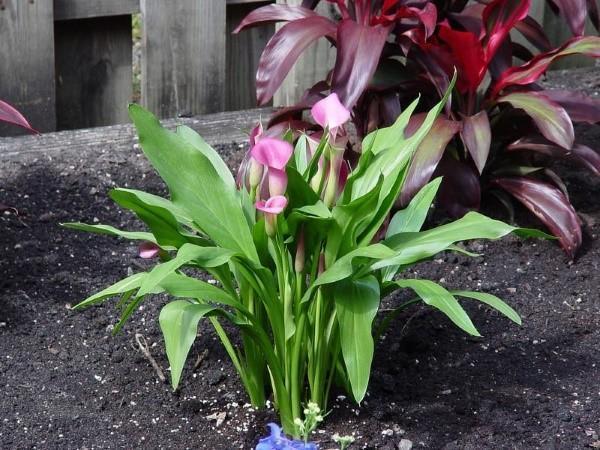 Indoor calla is a common occurrence, but summer residents are not yet very used to planting these flowers in flower beds. And it is completely in vain, because these flowers feel good in the fresh air. During flowering, they will become a real highlight of the flower bed, especially if you choose varieties with a brightly colored bedspread. Of course, calla lilies will not survive the winter outside, because they are a thermophilic plant, however, many other garden crops (for example, dahlias) also winter in the house, so why not try planting calla lilies near them?

On flower beds, you can grow both tuberous and rhizome calla lilies, the main thing is not to forget to take all the flowers indoors for the winter, otherwise they will freeze.

So, what you need to know in order for the calla to take root in the flower bed, to bloom and not disappear by the next season?

Regardless of what species calla lilies belong to and what their root system is, there are two ways to plant flowers:

The second method is preferable, because when planting without germination, the tuber or rhizome sits in the ground for a very long time. The first shoots will appear only after a month, which, in turn, postpones flowering..

For calla lilies, you need to take a sunny place, but in such a way that at noon the flowers are not in direct sunlight. It’s not bad if there is a tree with an openwork crown nearby..

The soil should be nutritious, but without an excess of organic matter, since the bush will drive foliage from it and forget about flowering.

Drainage in the holes is a must, especially for tuberous calla lilies. They do not tolerate stagnant moisture in the roots..

In the fall, calla lilies must be dug up and stored in a cool room. Rhizome species are dug up in the middle of summer, tuberous ones – at the end. During storage, care must be taken that the calla lilies do not dry out from lack of moisture and do not rot from its excess. You should also avoid rooms with high humidity – there growth processes will begin ahead of time..