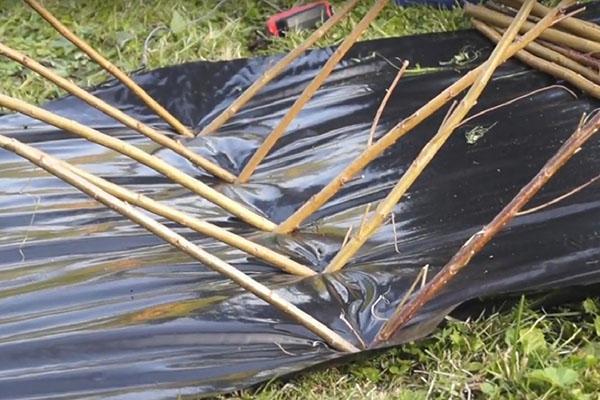 Willow can be a great decoration for your site. In landscape design, this tree is used in composing compositions, arranging living gazebos and hedges. In order for the cuttings of the cultivar willow to take root and form a powerful root system, it is necessary to observe the planting technology.

The most effective way to root willow cuttings is to plant them on black foil. With this technology, the planting material quickly builds up the root system. Within two months after planting, the willow will also form the aerial part.

It is important not to confuse black film with agrofiber. When planting, it is necessary to use black cellophane film. Agrofibre is not suitable for willow growth, as it retains moisture worse.

Selection and preparation of cutting

Unlike fruit tree cuttings, willow cuttings are harvested in the summer during formative pruning. For grafting, branches with a thickness of 5 mm or more are suitable. The length of the cutting is 40-45 cm. Such a rod will need to be buried in the soil by more than half. Such a cutting has a powerful root system..

In order for the roots to form faster, it is necessary to make an oblique cut on the willow handle. If you harvest cuttings in the summer, and plan to plant them in the spring, before planting, carry out the “revitalization of the cutting”.

To do this, it must be placed in water at a temperature of 30 ° C for a day. In order to check the condition of the cutting, remove some bark from it. If the stalk is green, then it can be planted on film..

Cuttings are planted on a film at an angle of 45 °. This allows two cuttings to be placed in one hole. This technology has several advantages compared to planting in open ground:

If you want to get a more powerful willow trunk, plant the plants at a distance of 30 cm.In order to grow willow twigs for weaving, the distance between the cuttings is reduced to 15 cm.