We propagate guzmania by children: when and how to do it correctly 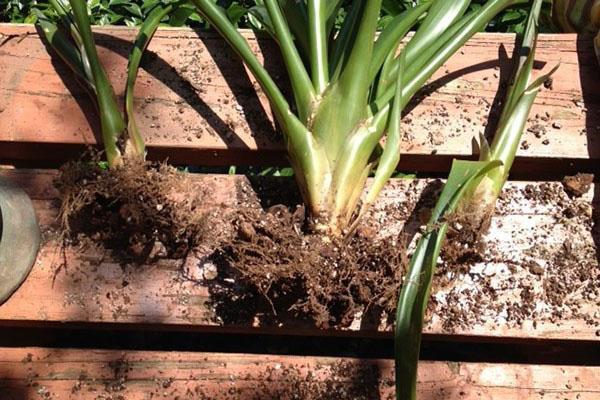 Flower growers engaged in the cultivation of guzmania are well aware of one of their features that distinguishes these plants from other flowers: at a time when the latter usually bloom annually, guzmania blooms only once. However, this is exactly the case when the emergence of a new generation is preceded by the death of the mother plant..

In other words, at the end of flowering, young baby shoots begin to form on the guzmania, and the adult bush itself gradually dies off. It is this method of breeding guzmania that is predominant. It allows you to get several already formed plants with their own root system instead of one flower. How and when you can separate them for “independent life”, and talk.

When to separate babies?

Guzmania babies grow up pretty quickly. Usually, within four months from the moment of flowering of the mother plant, the baby reaches almost half of its size and is quite ready for separation..

The main condition for the separation of Guzman children is that they have strong roots. If during this time the babies have not yet grown a good root, it is better to wait a little longer, otherwise they will not survive the transplant.

When the children are old enough, you should take them out of the pot along with the old bush. Use a stick to lightly shake the soil off the roots to make it easier to separate. Then find the place where the baby is attached to the parent and carefully cut it with a sharp knife. The further procedure can already be carried out with your hands, disconnecting the young bush.

It is necessary to carefully examine the children – the roots may not grow at all at the same time. If some processes do not have them or the roots are too small, it is too early to separate such a baby..

What soil to plant?

For children, a substrate is suitable in which adult Guzmania are also grown, namely from pine bark. To prepare it you need:

If too large pieces of bark are caught, they should first be chopped with a knife or pruner..

It remains to pour the sterilized and cooled bark on the bottom of a small flowerpot, set the separated baby in the center and add the substrate, giving it a stable position. The presence of a drainage hole in the pot is required.