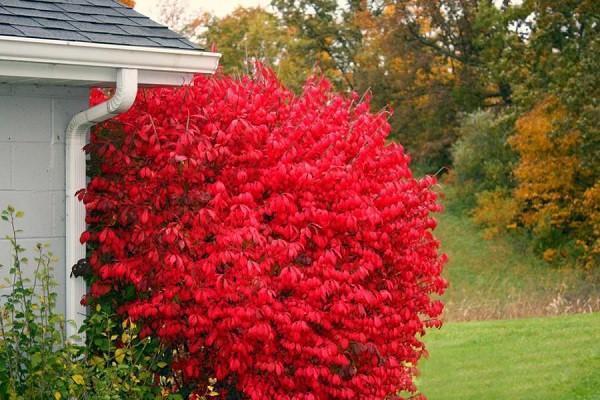 One of the interesting and very beautiful varieties of euonymus is winged euonymus. The sprawling lush shrub is used in landscaping for its chic decorative appearance. In autumn, a bright red spindle-tree bush in the shape of a ball compares favorably with the background of its green-yellow deciduous counterparts.

The winged euonymus got its name because of the special structure of the shoots. If you cut the branch lengthwise, you can clearly see that it has four edges, and the bark along the edges forms a kind of wings. The shoots of the bush are smooth and green. When grown in a garden, the height of the bush usually does not exceed 2 m, although there are also tall varieties. Under natural conditions, the bush reaches 4 m or more. It grows very slowly, but for a long time (about 100 years).

Unlike other types of winged spindle tree branches, they have the ability to creep along the ground and root themselves.

The roots of the spindle tree are superficial, but there are a lot of them. The openwork round crown of the bush is all covered with small, pointed on both sides, leaves. Their length is no more than 7 cm, and their width is only from 1 to 3 cm. The leaf plate has a dense structure and a glossy coating. Until the beginning of autumn, the bush has a green color, and then transforms into a deep red color.

In order for the winged euonymus foliage to acquire bright shades, it must be planted on the sunny side of the site, otherwise its color will be faded.

In mid-spring, the bush is covered with small yellow flowers, from which, at the end of flowering, small fruits are formed – boxes flattened on four sides. At an early stage, they are greenish, and when fully ripe, they become crimson. The seeds themselves can be either red or orange..

The winged euonymus also has several types. Among them it is worth noting: