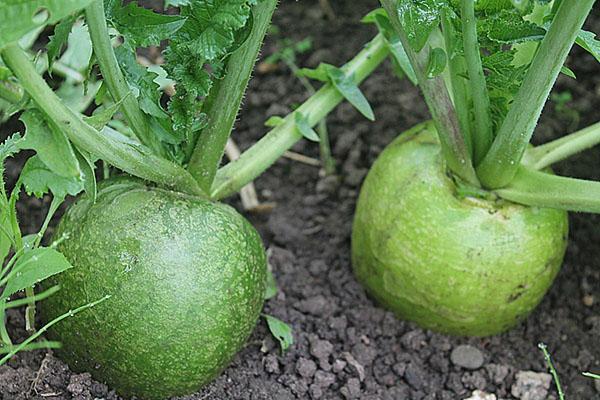 On the territory of Russia, the Margelan radish has not yet become widespread. In summer cottages, mainly white and black radish are grown. These varieties are known for their medicinal properties. Root crops of black radish are used in folk medicine. Alkaline and mineral salts in their composition remove toxins and toxins from the body.

Black radish is contraindicated for people suffering from diseases of the gastrointestinal tract. It contains a large amount of mustard oils, which irritate the stomach and intestines..

Daikon is widespread in Russia. The root vegetable taste is neutral, but it contains much less nutrients than Margelan radish..

If you want to get all the benefits of a radish and at the same time grow a root vegetable with a delicate taste, then the ideal solution is a vegetable called “Loba”. So in China they call Margelan radish.

It was from Ancient China along the Silk Road that this vegetable came to Kievan Rus, but with the advent of potatoes, they began to forget about it. The composition of Margelan, or “Green” radish contains much less mustard oils than black. The taste of the forehead is comparable to the daikon radish, but the green radish is much healthier..

The advantages of the Margelan radish include the ease of caring for this crop. In order to get a good harvest, you need to follow three rules:

Margelan radish grows well in the garden where cucumbers were previously planted. In good light, it will shoot arrows and will not form large fruits. Direct sunlight should not hit the radish for more than 6 hours a day. Green radish is planted in mid-July.

Plant three seeds in the holes made by the neck of a plastic bottle to ensure the emergence of seedlings. Before planting, disinfect the soil with a solution of ammonia or potassium permanganate, as young plants are susceptible to fungal infections.

With regular watering, Margelan radish grows up to 15 cm in diameter. It can withstand temperatures down to -5 ° C, so the harvest can be extended until November.

The advantage of root crops is their long storage time. After harvesting, the forehead does not lose its useful qualities until the next season..