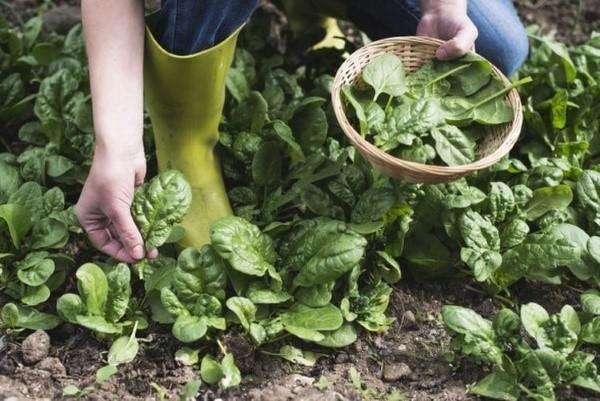 True lovers of greenery always have on their plots not only dill and parsley. Growing spinach allows you to expand your assortment and provide yourself with natural vitamins. Spinach leaves are delicious fresh and can be used in many different dishes. But to get really juicy leaves, and even in large quantities, it is worth finding out what spinach loves. Where is the best place to plant a crop, when can you start sowing and are there any nuances in caring for spinach? Let’s find out the details.

One of the main conditions for lush spinach bushes is the choice of planting site. The more luxuriant the bush, the greater the yield, which means that the plant needs more light. Spinach prefers sunny, cozy places where it will not be disturbed by a draft. In the shade, the plants, in principle, will grow, but they will not please with a particularly lush deciduous cap..

As for the soil, the culture is not demanding on it. The only condition is that the soil should not be acidic and too dense..

However, most gardeners, especially those who grow spinach for sale, prefer to fertilize their beds. To do this, before planting, for each square meter, a bucket of humus and 1 tbsp. ash.

Although spinach is a sun-loving culture, it does not tolerate heat. On the contrary, the optimum temperature for the development of culture is from 15 to 20 ° C. At higher rates, the bushes go into the arrow. But young spinach can easily endure frosts up to 5 degrees, and adult bushes – even up to 15 degrees below zero. Thanks to this, spinach can be grown almost all year round, especially if there is a greenhouse, even if it is not heated..

Breeders have bred many varieties that are slowly shooting. Among them are spinach Matador, Victoria, Giant.

You can sow seeds in the ground already at the end of March – at the beginning of April. It all depends on the region of cultivation, in the south, planting will be earlier.

The juicy leaves of spinach are in early spring and autumn, when it is still or not hot outside..

Growing spinach: how to sow and care for the beds

Spinach seeds have a dense shell, which prolongs their germination time. Untreated dry seeds will sit in the ground for at least 2 weeks. In order for the seeds to germinate faster, they must be pre-prepared..

You can do this in two ways to choose from:

Swollen seeds are sown in grooves up to 2 cm deep.At least 25 cm is left between rows for ease of maintenance and harvesting.

Spinach care is not difficult. Weeding and loosening the soil will take most of the time. The beds also need to be watered regularly. So that this does not have to be done often, the plantings can be covered with compost..

The timing of the harvest, that is, the trimming of the leaves, depends on the particular variety. Early ripening spinach is ready for cutting in less than 3 weeks after germination. When growing spinach, it is important to remove the leaves in a timely manner. Overripe, they lose their juiciness and become rough.