A giant bush in your home – Philodendron Sello 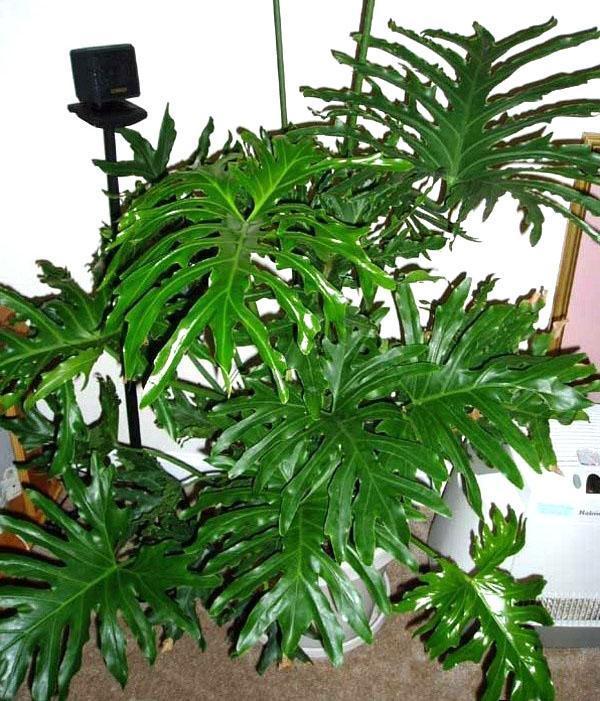 Philodendrons are true wizards. They are able to turn a room into a tropical jungle in a couple of years. Vines hanging on the walls or large bushes with fan-leaves … The latter include the philodendron Sello, which we want to tell you about today.

The species can still be found under the name of the philodendron double-feathery or double-periston cut.

Sello is one of the largest representatives of philodendrons. This applies to both the overall size of the bush and the leaves themselves. They are immediately striking: large, cut along the edge of the plate into segments. The length of an adult leaf is almost 1 m, it is attached to a long fleshy petiole. When the time comes, the old lower leaves die off, thus forming a straight stem. A clearly visible white spot with a dot in the middle remains at the place of attachment of the petiole. It is very similar to the human eye. The bush itself in indoor conditions rarely exceeds 3 m in height. But you must admit that this is so much for the house..

Young foliage first appears as an arrow. Gradually, the sheet begins to unwind from it. At first, it is wrinkled and light, but over time it straightens and darkens.

Sello’s root system is shallow, which creates some difficulties when choosing a pot. You should immediately abandon light plastic dishes: the bush will simply overturn it under the weight of the leaves. It is better to opt for clay vases, while they should not be deep and narrow.

Philodendron Sello: how to care for a powerful handsome man?

Despite the impressive size, this did not affect the nature of the flower in any way. He has not become more demanding and is quite content with the activities characteristic of other types of activities. These include:

As for the soil, it must be very loose so that water and air can pass freely. If the earth is heavy and dense, then moisture in it will keep longer. But this cannot be allowed in any way, otherwise the roots will rot. Philodendron grows best in a mixture of peat, leafy soil, and coconut. The components must be taken in equal quantities, and as additional leavening agents, use tree bark or vermiculite.

Philodendron Sello is one of those plants that can be kept in a dark room. Of course, not a single flower will survive completely without light, but on the north window it will be fine.

Video review of the cultivation of Philodendron Sello