Coconut ice cream – an opportunity to listen to your feelings 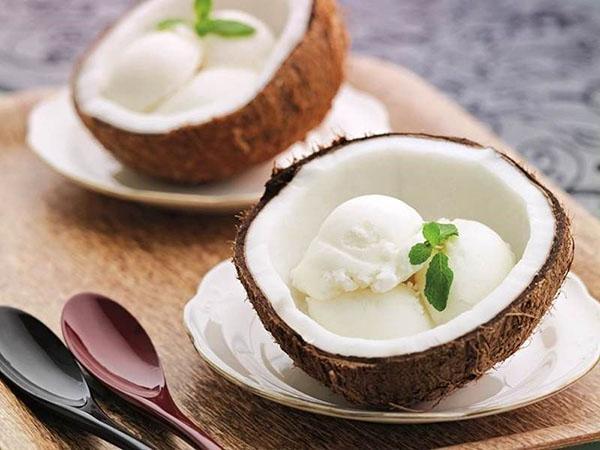 The snow-white pulp turns into a delicate delicacy when the hostess prepares coconut ice cream at home. With this treat, you can discover something extraordinary, while feeling an unprecedented freshness. Such a flurry of impressions descends on guests as soon as they begin to taste the heavenly dessert. What about children? One has only to pamper them with such sweetness, as they will be ready for anything for it. So what’s left for little – just cook it.

The recipe uses coconut milk. The product is bought ready-made or made on its own. The shavings are poured for 2 hours with water (1: 1.5), and then filtered. To thicken, put the mixture in the refrigerator.

First of all, pour 50 ml of water into a saucepan and wait until it boils. A pinch of salt is added to it. During this time, the yolks are separated from the whites (three pieces). 400 ml of thickened coconut milk is sent to the boiling liquid. Once it dissolves, screw the fire on and bring the mixture to a boil. Then a number of culinary procedures are carried out:

After that, return the egg-coconut mass to the mixture in the jug. Until the liquid boils, it is constantly stirred. At the first sign of gurgling, remove the dishes from the heat so that the coconut ice cream does not come in lumps. Using a sieve, filter the suspension and leave to cool on the table. Then put it in the refrigerator for 1 hour..

Whisk vanillin and 200 ml of cream into a fluffy, airy mass. Try not to make butter. Then mixed with the cooled product.

Once all the ingredients have been mixed, the semi-finished product is sent to an ice cream maker for 30-40 minutes. Set the desired mode and wait for the result.

To cook in this style, you will need 3 cans of exotic milk. The first two are put in the refrigerator overnight, and condensed milk is prepared with the last. Together with sugar (2/3 cup), cook until thickened, about half an hour. For 12 hours sent to cool in a cool place.

The next morning, the cream is separated from the liquid that has formed in the two previous jars. Beat them into a fluffy mass. Then add vanillin and cooked condensed milk, stirring with a mixer for about 3 minutes. If desired, add the filling, and then pack it in shapes and put it in the freezer. After 5 hours, the dessert is ready to eat.

Decorate coconut ice cream with different berries, but so that they do not drown out the taste of the delicacy. In some cases, a few strokes of sweet syrup or caramel are applied.