Harvesting corn for the winter 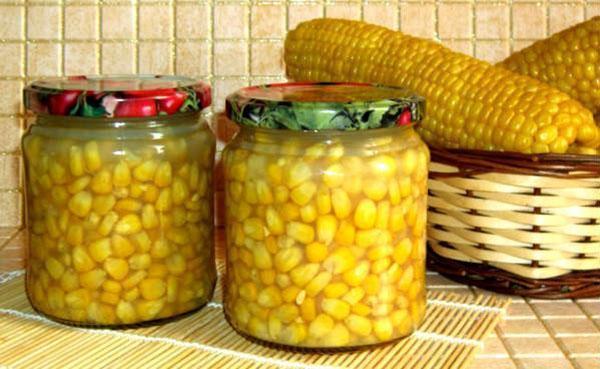 Corn became widespread in European countries at the end of the 19th century. French and Italian dishes are prepared using corn cobs. Canned grains are used in salads by the Spaniards and Greeks.

Corn grains are 70% protein. They contain B vitamins and a substance called biotin. Biotin regulates the carbohydrate-fat balance in the human body and participates in the synthesis of antioxidants that slow down the aging process. Corn also contains a large amount of minerals, such as calcium and magnesium, which have a positive effect on the condition of the musculoskeletal system..

Corn cobs rot within two weeks after harvest, and when frozen, corn loses a large amount of vitamins. Canning corn is a great way to preserve its health benefits..

Canning cobs is suitable for those who like to eat corn and salt, and grains harvested for the winter will be an excellent side dish for meat and are perfect for salads..

The ears are cleaned of leaves and corn silk. If the top of the cob is not ripe, the soft part is cut off with a sharp knife or broken off. Then the corn is put in a saucepan, poured with cold water and put on high heat..

After boiling, the heat is reduced and the cobs are boiled until tender. Milk corn is boiled for about 30 minutes, and mature corn – one hour. When cooking, water cannot be salted..

Boiled corn cobs are washed with cold water, and then put into a three-liter glass jar, which is pre-sterilized.

To prevent the jar from cracking, the corn and the surface of the jar must be at the same temperature. Then you need to carry out a few simple steps:

Then the jar is covered with a blanket. The corn is left covered for two days until it cools completely. After cooling down, add one tablespoon of 9% vinegar to the jar and roll up the lid.

The corn is boiled, the grains are peeled off the cobs. Then the grains are laid out in sterile jars. One tablespoon of salt and three teaspoons of sugar are added to warm water. The marinade is brought to a boil and carefully poured into jars. They are sterilized for 40 minutes, rolled up and wrapped.