Pruning is necessary to get a good harvest of plums. 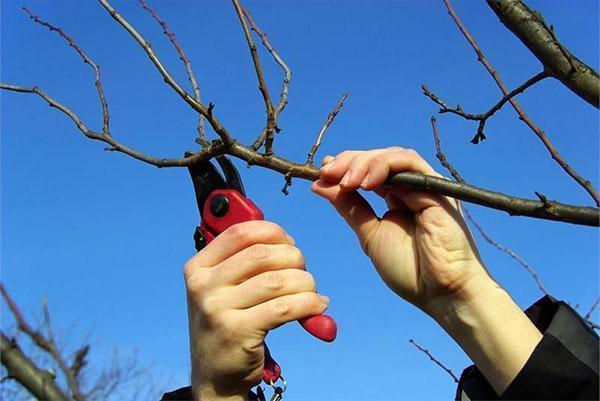 Plum, like all fruit trees, requires crown formation. Formative pruning can be done in the spring before flowering, but is less effective than crown shaping in summer. Pruning a fruit tree saves nutrients accumulated during growth. After pruning the crown in summer or spring, the tree forms more ovaries. Pruning will also speed up new growth..

If you are pruning plums in the spring, start crown formation from the lower skeletal branches. It is they who most often thicken the crown. After removing the lower branches and thinning the crown, you can better see last year’s growth and choose the leading shoot.

Spring pruning of the crown of the tree is carried out in early – mid-May, depending on the type of plum. First of all, the crowns growing inward, diseased and dried branches are cut off. In spring, the branches grow up to 20 cm. Annual growths grow stiff at the end of April. In early May, the branches form flower buds, therefore, it is not necessary to completely cut off the strong branches growing inside the crown, since a large number of fruit buds are formed on them..

Form small fruit shoots from these branches, shortening them to 10 cm.This way you can get more plums during the fruiting period..

After thinning the lower skeletal branches and the middle of the crown, you need to choose the leading shoot. Best of all, the role of the leader is performed by a shoot growing vertically upward. These shoots accumulate nutrients faster than branches growing diagonally or completely horizontally. The leading shoot should not have strong competitors, so the side shoots should be shortened by a third or half..

Work in the spring can be avoided if you carry out the summer crown formation. With this formation, you redirect nutrients to the strong shoots, and the plum will set more buds the next year. When pruning in summer, it is not necessary to remove branches growing inside the crown, they can be pinched, and then the shoots will stop growing. If you transfer such shoots to lateral branching, then the annual growth will reach a length of 30 cm.On such a lateral growth, the plum will form a large number of fruit buds.

After summer pruning, all cuts must be treated with garden varnish to avoid gum formation. If the treatment is not carried out, then the yield of the plum will decrease..