Simple cultivation of watermelons in the open field in the country 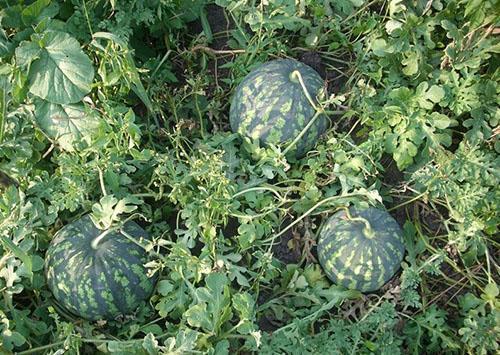 In order to get a large harvest of watermelon in the garden, you need to form bushes. The formation of the plant consists in trimming the side lashes, the watermelon must be pinched and watered abundantly. There are several methods for forming a watermelon bush..

Many gardeners form a watermelon from the first stages of growth. Cut off the side shoots, pinch the main whip, so that the berry pours and ripens faster. But this method is very time consuming, so we will analyze a more convenient and productive method..

In the first stage of growth, the watermelon does not need to be pinched. Let the bushes grow, and some of the lashes are intertwined. Only when the first fruits are formed the size of a small apple, you will need to start trimming the side lashes. This is due to the fact that at this stage the plant has accumulated enough strength to form six fruits. But, as with the usual growing method, you need to leave two fruits on each lash, the only difference is that you can leave not one lash, but three.

After the first fruit, it is necessary to cut the whip on which the watermelon grows. Cut the lash so that there are two large leaves on it. Thinning should be done carefully, since the lashes are intertwined and you can remove the side shoot on which several fruits grow.

It is not worth pulling the trimmed lashes out of the total green mass, as there is a risk of damaging the plants and the ovary. The cut lashes will dry out quickly and will not interfere with the growth of melons.

Pros of this method

With the free growing method, the watermelon forms not two, but six fruits, since the plant does not shed a large ovary. Since the watermelon bushes are intertwined, the area of ​​the garden should be large, but this allows you to grow more fruits on one bush. You can quadruple the yield, but then there is a risk that the fruits will not ripen..

A watermelon planted with the usual method must be mulched. In the free growing method, the role of mulch is played by a dense green mass.