Growing features and the best varieties of cilantro 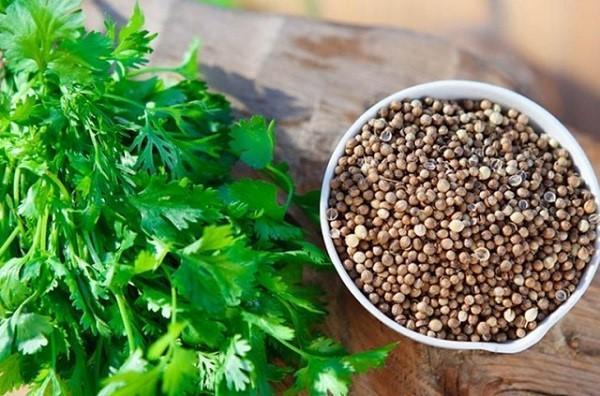 Cilantro belongs to the annual spicy-flavoring vegetable crops. It has a specific aroma that not everyone likes, however, in Caucasian cuisine, the herb is very popular and is added to most vegetable, fish and meat dishes..

Spicy grass can still be found under other names, such as coriander, bedbug, kishmets.

Cilantro blooms in the second half of summer until the end of August and is a good honey plant, attracting bees to the garden. When growing cilantro, it should be borne in mind that it needs long-term lighting, and on average 45 days pass from planting to harvest. In addition, with insufficient moisture, coriander quickly releases flower stalks..

The name of the plant comes from the Greek word “kores”, which means “bug”. Perhaps cilantro got it because of the special, not very pleasant smell that unripe fruits and the green part of the plant emit.

Read also about the benefits of cilantro!

Since cilantro seeds have the ability to germinate even at low temperatures (from 6 degrees Celsius), you can start sowing spices in open ground in early spring. Often, gardeners practice planting in several waves, spaced by two weeks between them. Sowing can be carried out until the end of August..

Rather large cilantro seeds are sown in wide rows with a distance of about 40 cm between them. The seeding depth is 2-3 cm.

Young shoots are very frost-resistant and easily tolerate recurrent spring frosts, even up to 7 degrees below zero. However, for the active growth of valuable green mass of cilantro, more comfortable conditions are required – at least 22 degrees Celsius..

Coriander also needs the sun, so shady areas for planting it are not suitable – there the bushes will stretch out and do not form lush foliage. No less important is abundant watering, the maximum need for which for cilantro occurs during the flowering period..

The soil for cultivation must be fertile. Plant well after legumes, cucumbers, potatoes or cabbage.

Most often, the following types of coriander are grown on the plots: