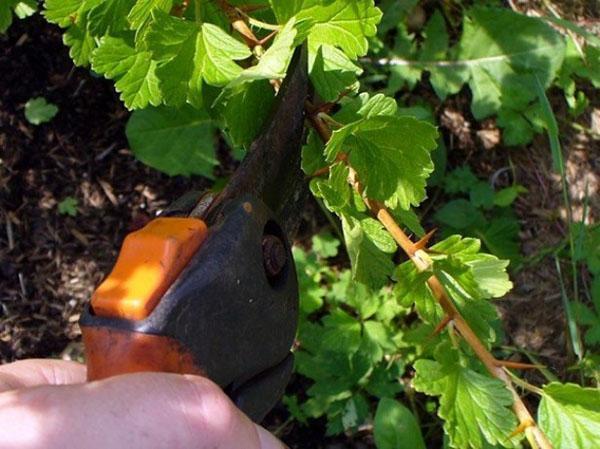 The gooseberry is a relative of the currant. Like currants, the shrub is not picky about the composition of the soil, so the gooseberry grows well even on heavy loam. Many gardeners notice that by 4-5 years the plant begins to bear less fruit, and its berries become smaller. Therefore, the bush is dug up and replaced with a new one, since it is believed that the gooseberry fruiting cycle ends.

In fact, gooseberries can bear fruit abundantly after reaching the age of five, but for this you need to produce spring pruning annually, for the first five years..

In an annual bush, first of all, all young growth, diseased and dried branches are removed. The root system of a young gooseberry cannot provide enough nutrients to a large number of root shoots, so only one skeletal branch should be left in the first two years. When the root system gets stronger, the gooseberries will begin to bear fruit. After the first year of fruiting, not one, but several skeletal branches (no more than 5) are left. So gooseberries are pruned to four years of age. Then all shoots older than two years, except for the three strongest skeletal branches, are cut off, leaving only one or two year old branches.

In the fifth year, the gooseberry growth process slows down, and then only cosmetic pruning is done, that is, the branches are shortened and diseased or frozen shoots are cut out. But every four years old shoots still need to be removed..

Old varieties of gooseberries are very vulnerable to fungal diseases, therefore, it is better to shorten branches that are too long or put supports under them so that the branches do not fall to the ground under the weight of the fruits, then the likelihood of infection will decrease.

The gooseberry is very fond of the sun, so the middle of the bush is thinned out for access of sunlight to all branches. Another advantage of thinning and pruning gooseberry branches is that the remaining shoots receive more nutrients, and the fruits, as a result, become larger..

You can cut the gooseberries in the fall, but then you will not see the frozen branches. In the spring, when deciduous buds begin to swell, pruning is more convenient. Then branches with a small number of deciduous buds are immediately noticeable – this greatly simplifies the pruning process..