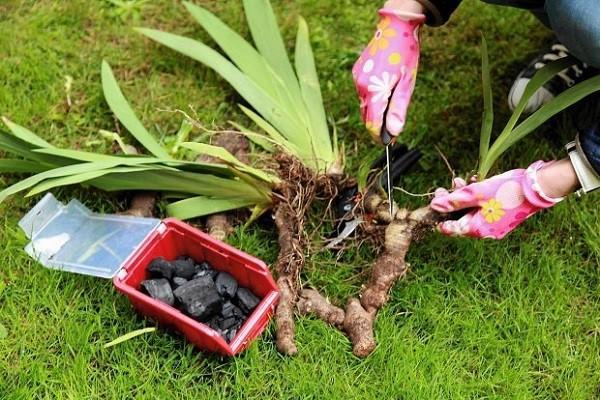 Among the wide variety of iris species, bearded irises are perhaps, if not the most beautiful, then some of the most charming representatives of these flowers. They can be easily distinguished from other plant species by their short bristles on the petals, which resemble a beard and are colored yellow..

All varieties of irises are perennials and can grow in one place for more than 20 years. However, over time, the bushes grow strongly and begin to take up a lot of space, “absorbing” space around them with a diameter of up to 2.5 m. In addition, the thickening of the plantings adversely affects the flowering of irises, reducing its quantity and quality. To prevent such a situation, old irises should be periodically divided.

Irises must be planted at least once every 4 years..

Read also the article: when you can transplant irises?

When to start dividing irises?

The most favorable time for the reproduction of irises by dividing the bush is late summer or early autumn. Plants transplanted during this period have time to take root and get stronger before the onset of the first frost. This means that they will survive the winter well and will delight with their flowering next year..

However, quite often flower growers also practice spring flower transplantation. It is also quite possible to divide irises in spring, but it is worth considering the fact that, most likely, the bushes will not bloom this year..

How to split an old bush?

The overgrown iris bush must be divided by digging out most of it with a shovel. Further, you can divide the dug plant in two ways:

Each iris cut must have a rhizome with at least one annual link and leaves. The more leaves, the more likely it is to have a flower bud, which means that iris will bloom this year..

In order for the iris to take root faster and in order to avoid a rapid loss of moisture, it is necessary to cut off all the peduncles (if they are on the cut), as well as trim the leaves, leaving no more than 1/3 of their height.

Preparing the parcels for planting

Formed iris cuttings should be carefully examined for soft spots on the rhizome, which indicate rotting. If any are available, with a sharp knife it is necessary to cut out all the rotten soft part to healthy tissue. Next, soak the iris for 30 minutes in a solution of potassium permanganate, and then sprinkle all the cuts with ash.

It is impossible to plant delenki right away – they must be kept in partial shade for 2-3 days, so that the irises wither a little, and moisture evaporates from them.