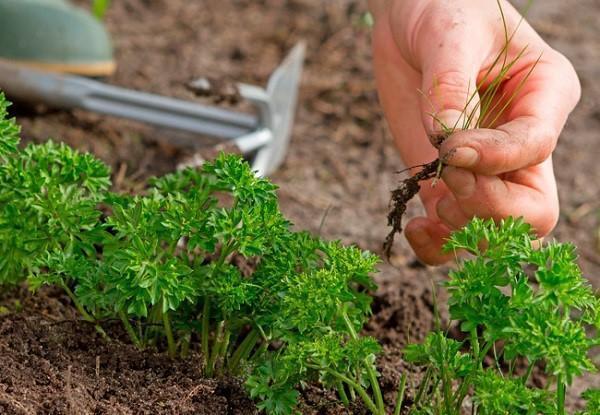 Parsley is one of many plants that can be planted either directly into the soil or by seedling. The latter is most often used to obtain an early harvest of scented leaves. If such a goal is not worth it, the easiest way is to plant the spice right away in the garden. Parsley seedlings require attention and often suffer from a lack of lighting, as a result of which the seedlings are stretched. And the bushes in the open air, under the sun, have enough light and heat. Let it be a little later, but in any case they will build up a thick deciduous cap, and the worries of gardeners will noticeably decrease, because there will be no need to dive and replant seedlings.

When growing parsley outdoors, you need to pay attention to the following factors:

Parsley grows equally well in the sun and in partial shade. If there is a shortage of free space in the garden, you can also make beds in the garden, under small or young trees. But places with a high occurrence of groundwater should be avoided..

In the garden, it is better to plant spicy greens where onions, potatoes or tomatoes were grown last season, but other root crops are planted after parsley no earlier than 2-3 years later..

Organic matter should be applied to the site in the fall, before plowing. Parsley responds best to compost and humus. But mineral fertilizers are laid already before sowing seeds: in early spring or 2 weeks before planting before winter.

When growing root parsley, organic matter must be used a year before the planned planting..

Parsley is usually sown in grooves. The planting depth of seeds should not exceed 1.5 cm, otherwise they will sit in the ground for a long time. Water the beds made abundantly, put the seeds in them not very thickly and cover them with earth.

As for the preparation (soaking) of seeds, its need is determined by the timing of planting:

What care does parsley need??

Spice beds should be watered regularly and the aisles should be loosened after each watering to avoid crusting. In addition, planting needs timely weeding, especially young shoots. If weeds are not removed in time, they can choke parsley..

Top dressing is also important, especially on poor sandy soils. For root varieties, it is necessary to apply phosphorus-potassium fertilizers, and for leaf varieties, nitrogen preparations are more suitable. Two dressings are enough per season.

Video about sowing parsley in open ground in spring