How to prune cherries for good fruiting 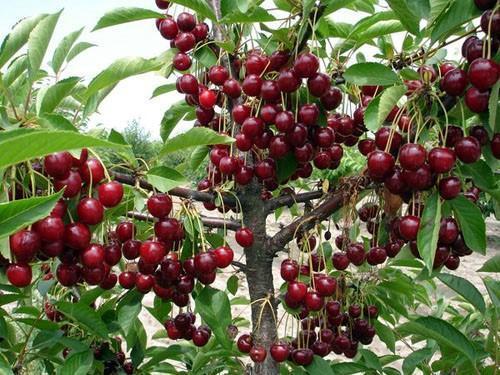 Cherry belongs to stone fruit trees. Its saplings, as well as peach, apricot and plum saplings, are grown on rootstock. Many gardeners think that, unlike other stone fruit trees, cherries cannot be shaped. Cherry crown is not cut off, and every year it grows more and more.

The branches of a 15-year-old tree reach a size of 60-70 cm. By this age, they begin to shed deciduous buds, and tend to the ground. On drooping branches, practically no new fruit and vegetative buds are formed. If such a branch is shortened too much, cutting off all fruit buds, then new cherries will no longer be laid. Only after two seasons will new shoots appear, and the branch will begin to grow again. It is because of this that gardeners believe that pruning cherries should not be carried out, but this opinion is erroneous..

Cherries, like other fruit trees, are worth pruning. But pruning should be done only after the cherry reaches 6 years of age. If you start forming the crown earlier, then the immature tree will develop more slowly and give small yields. In addition, wounds of young cherries take longer to heal. Because of this, in the winter, after the autumn pruning, the tree may freeze.

From the age of 6, it is necessary to form a cherry crown every season. First of all, frozen, dried and diseased branches are removed. The general rules for pruning are the same as in other fruit trees, but branches directed into the crown are not always pruned, since the largest number of flower buds is laid on young shoots. This is a feature of cherry trees. On a young shoot of a tree 5-7 cm long, up to 8 fruit buds can form. Even if such a shoot is directed inside the crown, it will spend all the nutrients on the development of fruits, it will not have energy for growth, and it will not thicken the crown. The central shoot of a 7-8-year-old tree is pruned to drown out the growth of the cherry and transfer it to lateral branching.

When the cherry reaches 15 years old, only cosmetic pruning is carried out, shortening the branches of the tree.

The drooping shoots must be completely removed or cut into 3 buds, so you stimulate the formation of flower buds the next year.