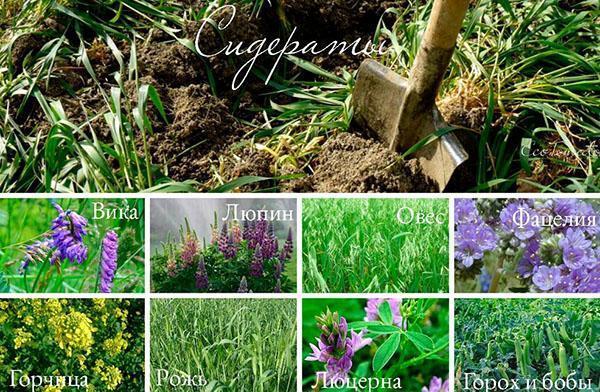 At the end of summer, gardeners begin to gradually relax. However, this is a great time to apply crop rotation and green manure to improve soil quality. Potatoes, onions, garlic, and also tomatoes are harvested from the beds. Almost 2/3 of the site becomes desert. Now a new batch of weeds begins to sprout on it. To prevent this from happening, they are replaced with ordinary white mustard or another crop..

The seeds of the selected green manure are scattered around the garden without covering them with earth. Grains can be pecked by birds, so many cover the land with a protective cloth for several days..

The weeds on the site absorb all the useful components, and the farmer simply removes them. The annoying perennials are just taking root. At the same time, mustard greens remain on the territory. Its foliage is dug up with soil, which serves as an excellent mulch. But when the late harvest is harvested, they add compost.

Home crop rotations are not as efficient as those done in the fields. Since it is impossible to completely isolate / remove one crop from another in the garden. Nevertheless, the procedure is considered useful. Each plant variety takes an individual set of components from the soil. As a result, the plantation is depleted as much as possible. This will not happen if you replace it with another variety..

Cabbage not only absorbs a huge amount of nutrients, but also becomes a breeding ground for many diseases. It is not recommended to plant it in the same place for two years in a row..

For a successful crop rotation, it is advised to acquire stationary / permanent beds. On a huge site, it is difficult to determine exactly where and what grew. The alternation scheme is built in such a way that the crops move in the garden in a circle. For example, there should be cabbage or onions behind the potatoes. Why? After root crops, the owner applies a lot of fertilizer. The plant processes them, which serves as an excellent feeding for the mentioned vegetables..

Now it remains to choose the right type of green manure. White mustard is an ideal companion for potatoes, but unacceptable for radishes, carrots, cabbage, daikon and other crucifers. They give excellent yields after tomatoes. But in front of them on the site, a phacelia is grown, which needs to be deepened into the ground. Sowing of the laid crops is carried out using the following technology:

They buy siderates not in bags, but per kilogram. Planting material should be enough for several years.

In this case, it is important not to forget to make a note in the notebook. Since the culture is launched on the same bed no earlier than 3-4 years later. Then the crop rotation technology will be successful..