Rowan black – a beautiful, tasty and healthy shrub for your garden 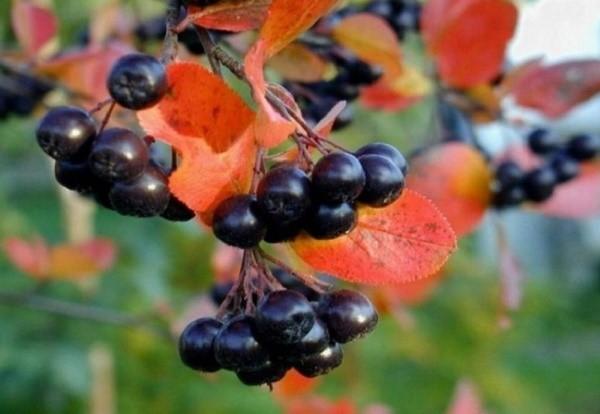 Many of us remember the taste of red rowan berries from childhood, but not everyone knows that they can be of a different color. Rowan black is better known among lovers of traditional medicine, as it is a storehouse of useful substances. But at the same time, it remains very decorative due to its ability to change the color of the leaves. Seeing at least once in September black berries against the background of a red deciduous cap, you will certainly want to plant this crop.

Rowan black obtained as a result of crossing chokeberry and common mountain ash. For the characteristic black color of the berries, it is often called simply chokeberry, although in fact they are two different varieties..

Description of culture and characteristics

Black mountain ash grows as a short tree up to a maximum of 4 m, or in the form of a branching bush. While the plant is young, it has a compact compressed crown, with age it spreads to the sides, reaching a diameter of 2 m. The branches are reddish at first, as they become lignified, they become dark gray. The leaves are small, green, but by autumn they completely turn red, which gives the bush a decorative look.

The shrub blooms in late May, dissolving small white flowers with a pink tint, collected in lush inflorescences-shields. Flowering lasts up to 2 weeks, after which the fruits are tied.

The chokeberry has very tasty berries: they are semi-ripe, tart, and when fully ripe, they become sweet and sour. Berries are small, up to 12 mm in diameter, painted black, ripen closer to mid-autumn.

Black mountain ash surpasses ordinary mountain ash in terms of the content of nutrients and microelements. This makes the shrub a welcome guest in every garden. It will not only decorate it with its appearance, but also serve as a source of vitamins for the human body. Black berries contain an increased amount of vitamins C and E, and there are a lot of other substances in them. A particularly valuable mountain ash for hypertensive patients: taking funds based on it at the beginning of the detection of the disease will allow not to start the process, and in the future – to control pressure drops. In addition, the plant has a choleretic, sugar-reducing, antispasmodic effect..

The shrub prefers light and moist areas. In shady places, he will not please with a good harvest, and in fact the culture is most often grown precisely for the sake of medicinal berries. Since the root system of black mountain ash is located in the upper layer of the soil, it is demanding on moisture. But the bush hibernates very well, having a high winter hardiness. He does not need shelter, except for young seedlings. This allows you to grow a medicinal plant even in the northern regions..

In general, caring for black rowan is minimal and consists of:

Video about the beneficial properties and growing of black mountain ash