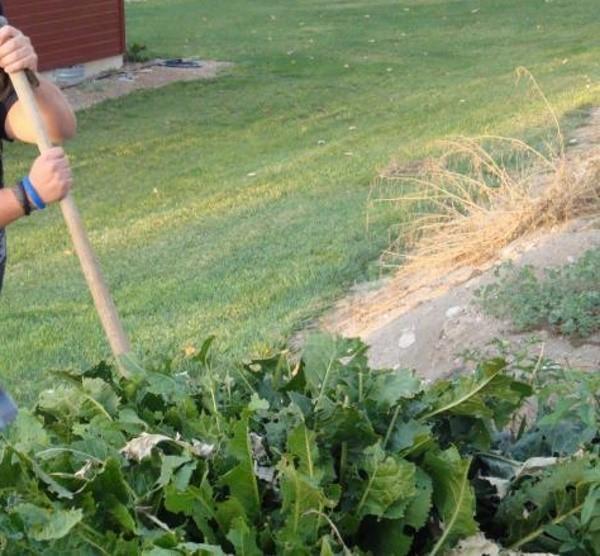 Horseradish is not the kind of culture they say “planted and forgotten.” If you follow this rule, in a couple of years you will be faced with a completely different question: how to get rid of the horseradish. On the one hand, this is a necessary plant that is useful for conservation, preparation of savory snacks and even medicinal potions. But don’t forget that horseradish has a very powerful root system. The central root-rod deepens to 2 m. If the bush grows in one place for a long time, it acquires many lateral roots. They are located horizontally, thus, moving around the site and every year taking up more and more space..

It is quite difficult to dig a deep-seated horseradish root, not only because of its deepening. In the process, you will inevitably hook the side roots with a shovel. If they remain in the ground, then instead of one bush you will get many new ones, since the delenki will quickly take root..

How to get rid of horseradish folk remedies

If the thickets of horseradish have not yet reached sad proportions, you can simply try to dig out the bushes. It is better to do this with a pitchfork, in the spring, when the ground is still loose, carefully choosing all the roots. The procedure will need to be repeated several times, depleting the plant’s root system..

So that horseradish does not grow in the garden, it must be planted in a container (bucket or barrel). You can also enclose the garden on all sides by digging in slate or metal.

Chemistry in the fight against horseradish

It will be a little easier to remove horseradish growing not among cultural plantings, but somewhere in the corner of the garden. In this case, you can safely apply chemicals without fear that they will harm the plants that grow nearby..

The following means will help get rid of horseradish thickets:

In conclusion, I would like to add: in order not to think later how to get rid of horseradish, you need to dig it out every year, maximum – in two years. Then this life-loving plant simply will not have a chance to reproduce on its own..