Growing Iberis in the Garden: A Living Flower Blanket Under Your Windows 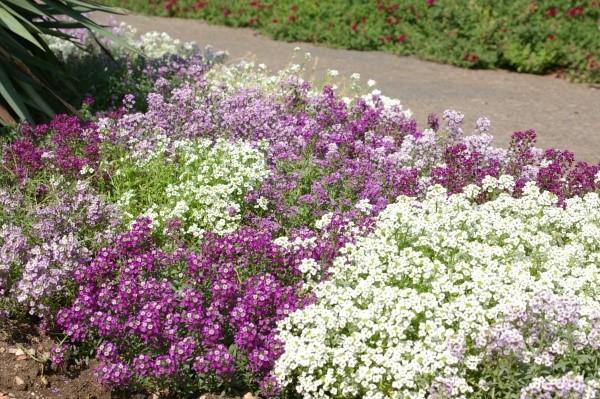 If you want to emphasize your flower bed with a delicate border, plant Iberis in the garden. Growing Iberis is not particularly troublesome. A variety of types and forms of plants will allow you to choose flowers to your taste. These can be creeping ground cover varieties or upright compact bushes. However, all of them will give you two months of enjoying the abundant fragrant bloom..

Since the plant has a tap root system, it is not very fond of transplanting. And given the fact that the seeds sprout well, many gardeners prefer to plant them immediately in open ground.

Like most flowering crops, Iberis prefers well-lit locations. In extreme cases, it can be light partial shade. With a lack of lighting, the bushes begin to stretch out, and the flowering becomes less abundant..

Regarding the soil, then the natural habitat of the growth of Iberis leaves an imprint. In the wild, it “lives” in mountainous areas. It is not surprising that it will be better for bushes on light loams and rocky soils..

The area where the Iberis bed is planned should not be flooded. The plant will not survive stagnant moisture.

Iberis seeds are distinguished by high germination rate, which they retain for 4 years.

There are two ways to sow them on a flower bed:

Spring sowing can be done in two passes by sowing a second batch of seeds after 3 weeks. Thus, when the bushes sown by the first have already faded, the latter will still delight with an abundance of inflorescences until the end of September..

Seeds need to be sown rarely, so that later you do not have to break through the crops. You can try to transplant torn seedlings, but they take root rather badly. It is better to sow less often at once. You should not fall asleep on top – just sprinkle with a thin layer of sand. When sowing in autumn, the garden bed can be covered with leaves for the winter..

Is it difficult to care for the plant

Even novice gardeners are capable of growing Iberises. This is an absolutely unpretentious crop, and most varieties have good frost resistance. For the southern regions, you can pick up thermophilic species, and for the central zone – more resistant Iberis.

Taking care of flowers is easy, as you practically don’t need to do anything. If the summer is with precipitation, this moisture will be enough for the bushes. But in a drought, you need to walk through the beds with a watering can 2 times a week. Iberis can grow without top dressing, but if the soil is poor, it is advisable to add a mineral complex a couple of times per season. So it will be possible to maintain its flowering at the proper level. Inflorescences that have faded must be cut off so that they do not spoil the appearance of the bushes.

There are some nuances when growing perennial Iberis. At the end of flowering, they must be cut off, leaving no more than 2/3 of the height of the stems. And somewhere in the 4-5 year of life, plant the curtains: too thick, they bloom worse.

Video
Previous Post
Why are peas grown in your garden useful?
Next Post
Pear variety Belorusskaya Late is grown for long-term storage of fruits