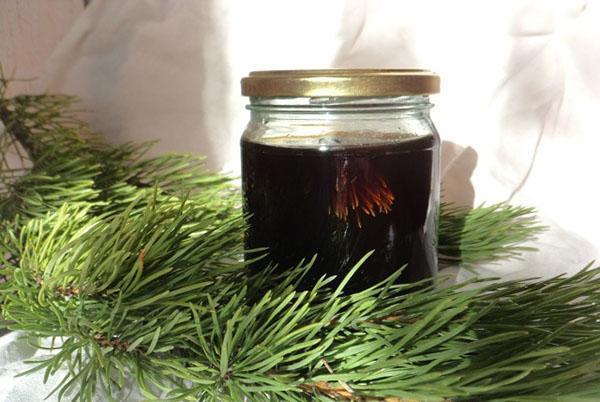 The medicinal properties of conifers have been known for a long time. Near them, even the air becomes cleaner, you can breathe easily and freely. Unfortunately, it is not always possible to arrange a pine forest near the house in order to have such useful helpers at hand. However, while walking through the woods, a few twigs are often brought home. You can put them in a vase, and soon the room will be filled with a fresh pine scent. And you can make incredibly tasty, fragrant and medicinal jam from pine needles.

Usually, the preparation of jam begins in the middle of summer or autumn, when fruits, berries and vegetables ripen. But jam from coniferous needles is best cooked in winter – then they have the greatest amount of nutrients.

How to properly prepare pine needles?

Before proceeding with the preparation of the jam, freshly picked pine branches must be doused with boiling water. Then break off the needles and sort them out, removing the dried ones. You will need 2 cups of needles in total..

Now the needles should be chopped. To do this, pour them into a blender and add approximately 700 g of water..

What else is needed for medicinal jam?

In addition to pine needles, for a delicious medicine you need to prepare:

Spruce needles can be used instead of pine.. After the needles are crushed into a mushy state, it is necessary to pour the mass into a saucepan and add another 800 g of water. Thus, the total amount of liquid was 1.5 liters. Pour the washed rose hips (whole berries) to the needles and leave to infuse for 12 hours. During this time, the fruits will also give up all their useful substances even without heat treatment..

The resulting infusion will acquire a yellowish tint. It must be filtered through three layers of cheesecloth or through a fine sieve and poured into a saucepan where the jam will be prepared. Further preparation of the dessert is as follows:

Pour the finished jam into jars and roll up. You can store it both in the refrigerator and in a cool dark place (basement, cellar). In winter, a jar of such a “medicine” will help protect loved ones from colds and strengthen the immune system.

Useful jam from the needles of coniferous trees, video