Tying plants in the greenhouse 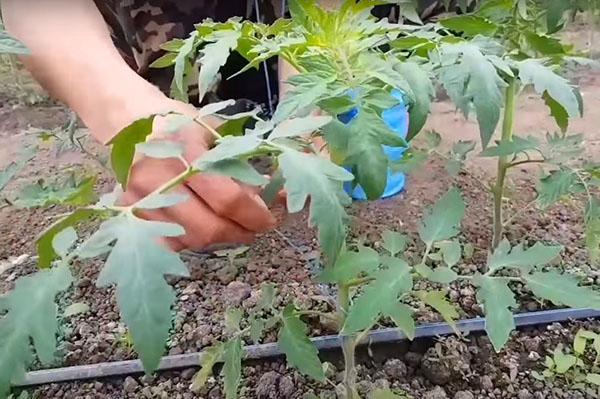 The greenhouse, in addition to the protective function, also serves as a support for plants. There are several ways to tie cucumbers and tomatoes. Growing such crops in greenhouse conditions is convenient because it makes it easier to care for them. Due to the fact that a constant temperature regime is maintained in the greenhouse, the crop ripens faster.

A garter of plants is necessary so that, under the weight of the crop, the plant does not lean to the ground, and its fruits do not rot. To tie up young plants, you will need a rope with an ultraviolet protective additive from the sun’s rays. Sharp scissors are also needed.

Consider several ways to garter young cucumbers and tomatoes growing in a greenhouse.

Read also our article: how to pinch tomatoes?

Garter with a loop

Measure the length of the rope from the greenhouse beam to the soil surface. Next, a rope is wrapped around the plant and tied to a knot, the loop is not tightened tightly, leaving a distance from the knot to the central shoot of the bush.

Since in the process of development, the central shoot of the plant thickens, the distance between the node and the central stem should be equal to 2-3 cm.

The other end of the rope is tied to the greenhouse beam. Then the young stepsons are removed, and the plant is wrapped with a rope counterclockwise. It is necessary to wrap all internodes of the plant.

You can tie the plants with a “figure eight”, for this, wrap every second internode. Read: Caring for Tomatoes in the Greenhouse!

With this method of garters, a piece of rope is measured 10 cm more than the distance from the greenhouse beam to the soil. Using a peg near the plant, you need to make a hole. The rope is tied to the greenhouse beam on a strong knot, and the free end of the rope is immersed in the hole and buried. A very tight vertical rope comes out, and therefore the cucumber wraps around the rope very tightly. The tomato is tied up, twisting it with a rope counterclockwise.

It is also necessary to remove all young shoots of plants, otherwise it will be inconvenient to remove them after tying..

See also the article: about growing cucumbers in a greenhouse!

Video
Previous Post
Acquaintance with raspberries Pride of Russia or heroes in Russia still remain
Next Post
Why is a trellis necessary for growing blackberries?