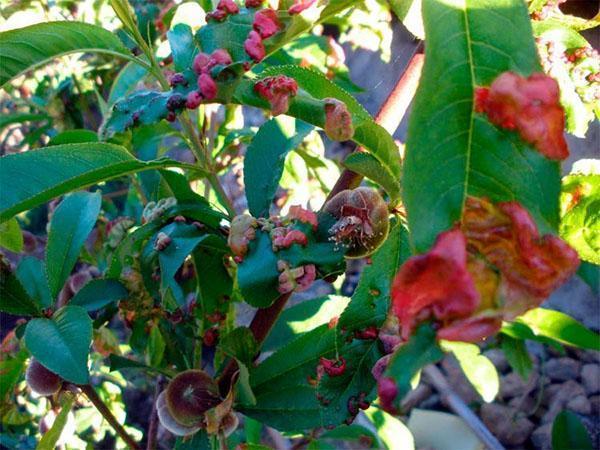 Peach is a plant from the stone fruit family. The peach tree lays new deciduous buds in the second year after planting a two-year-old seedling in open ground. It is during the formation of new vegetative buds that the peach is most susceptible to curly leaves. This fungal disease affects not only the leaves of the tree, but also the young shoots on which the peach lays fruit buds for the next year..

At the first stage of the development of a fungal disease, the leaves of the tree begin to bubble, and then curl, turn yellow and fall off. In the later stages, curliness affects young peach shoots. Fungal spores spread to young branches under the bark of the tree. Affected branches swell, and their leafy buds die.

It is very difficult to deal with the curliness of peach leaves. Therefore, in early spring, it is necessary to begin the prevention of this fungal disease..

In mid-March, when the buds of the tree have not yet woken up, it is necessary to carry out preventive pruning of the crown. The causative agents of peach leaf curl and the spores of this fungal disease accumulate in the young deciduous buds of the tree. Therefore, in order to protect the tree from curly leaves, you need:

Since the peach grows green mass very quickly, the tree will recover from pruning by early summer. Preventive pruning will help minimize the effects of curly peach leaves, but the risk of contracting this fungal disease persists until the rosebud stage. Curliness may appear during the flowering period..

During flowering, irrigation and wet fungicide treatments should not be carried out on the leaf or under the root, since due to excess moisture, the peach can lose its color. If you notice the first signs of curliness a week before flowering or at the rosebud stage, take a close look at the tree. Remove any yellowed, bubbly leaves and burn them. Such leaves cannot be added to the compost heap..

If there are a lot of infected leaves and the fungal disease has already spread to young peach shoots, dilute the Bordeaux mixture in 8 liters of water and add 30 g of the “30B” preparation. After a while, the mixture will thicken to a resinous state, and it will be possible to process wood with it..