Acquaintance with the amazing Kampsis from photos and descriptions 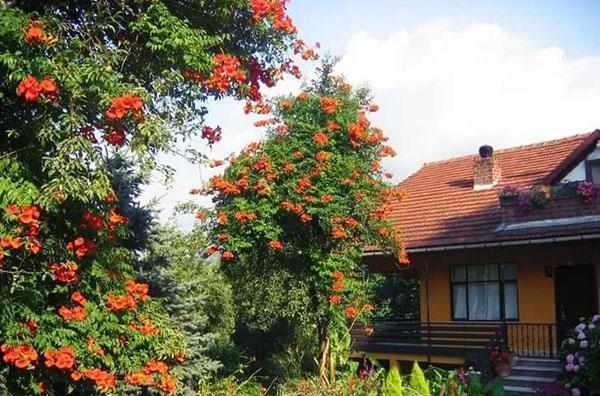 The unique plant Kampsis is used mainly in the southern zones, for landscaping, decoration of gardens and estates. We will have a pleasant acquaintance with the photos of Kampsis presented in the article and his botanical descriptions.

What a wonderful gramophone? 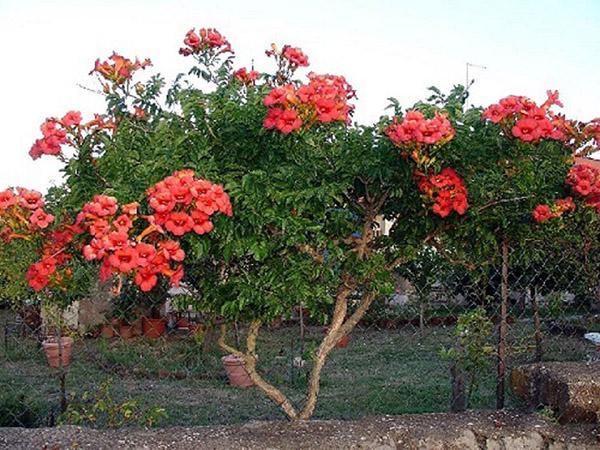 Campsis is a fast-growing perennial plant of the Bignonium family. That is, a climbing plant that clings to everything that stands upright. It can be easily compared to wild grapes, only Kampsis is more massive. In general, it is a shrub or tree, from which long flowering vines come. The people have a different name – “Trumpeter”. 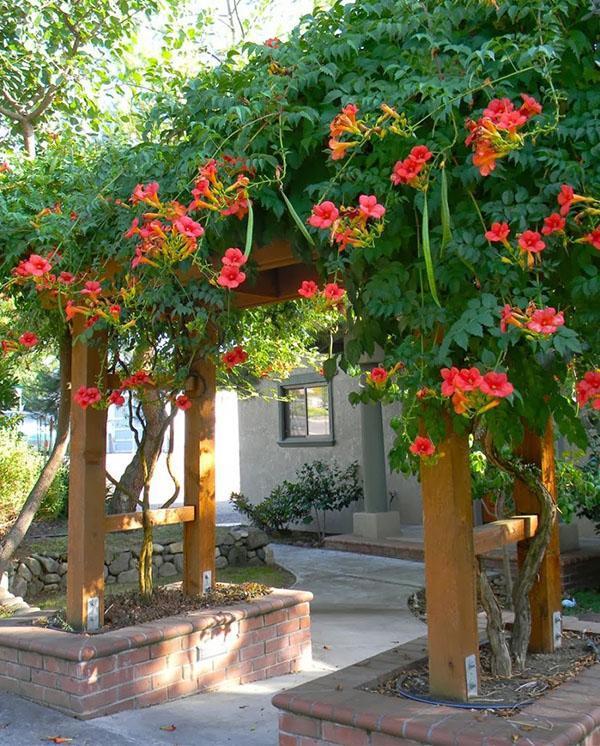 Most likely, he was so nicknamed because of the flowers, because they are somewhat similar to musical pipes of crimson, red or pink color. Flowers are collected in inflorescences of amazing beauty: elongated in length up to ten centimeters, bloom in July, five or six pieces, and bloom until September. The fruit is a cylindrical box. It ripens and produces seeds in September or November.. 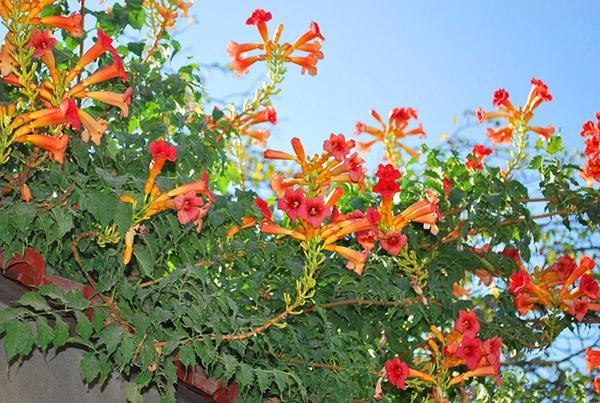 Young shoots of Kampsis have a thin greenish crust, while adults have a strong reddish-brown bark. Gradually form thickets. The roots are powerful, they spread well enough over the territory, and only a part goes deep. This is due to the fact that the plant needs more sunlight than nutrients in the ground. Therefore, it stretches higher, higher and higher. 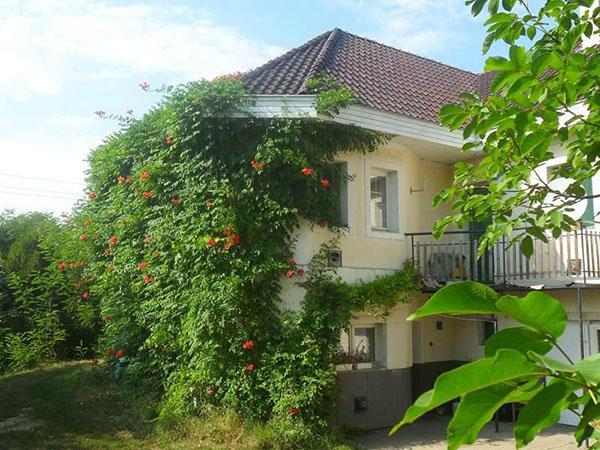 The leaf plates are oval, ovoid. Serrated edges are characteristic. The leaves are arranged on petioles, and each of them bears from seven to eleven leaf plates. The upper side of the leaf is smooth, and the lower side is pubescent near the main veins. 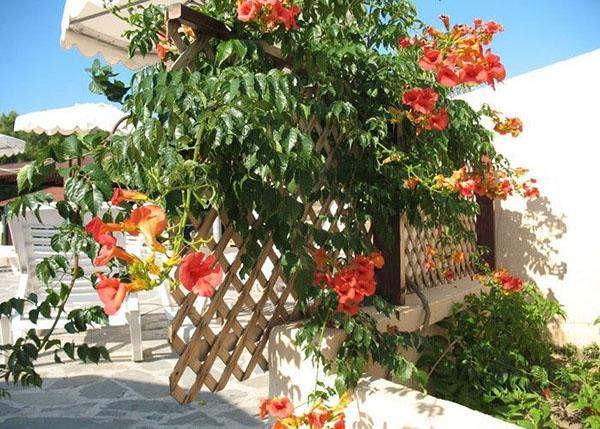 In terms of soil, it is unpretentious, but Kampsis cannot stand the cold. Therefore, it is planted on the southern sides of the plots. In winter, they are reliably covered with foil, brushwood, and so on. Otherwise, the roots simply freeze through, and the plant itself dies. In southern Ukraine, kampsis can be found almost everywhere, because care for it is minimal. The plant tolerates the winter period calmly and summer residents of the southern regions do not care about protection from frost. 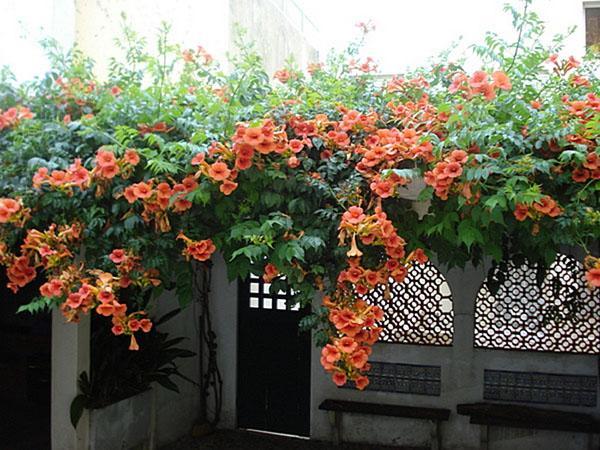 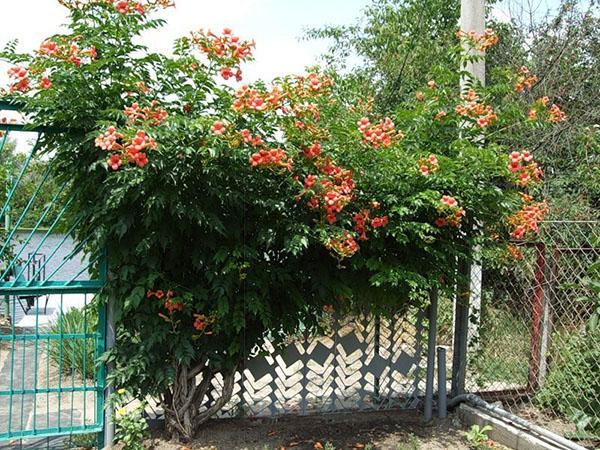 Campsis is not one plant, but a whole genus that includes several varieties. A number of decorative varieties and two main types.

The main species are those that, undergoing selection, became the basis for the development of new varieties of plants..

The main types of kampsis: 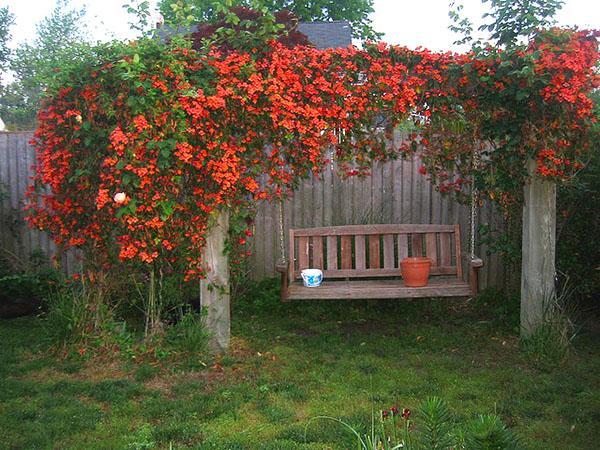 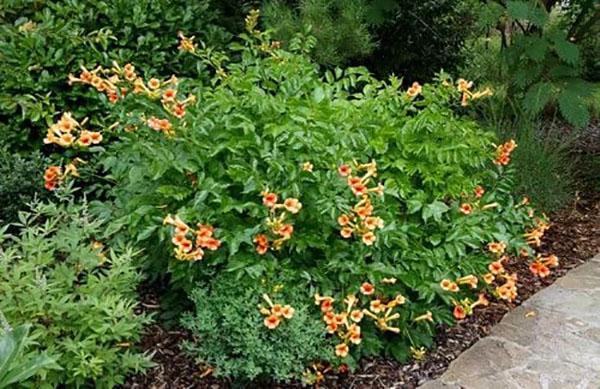 The second name of the plant is large-flowered kampsis. It does not have aerial roots, it wraps around any support with its shoots. Grows in parts of Japan and China. Differs from congeners even less endurance. Leaves with serrated edges, dark green. The Chinese campis is ten meters high. The flowers are large (up to 8 cm), which is why they called him that. The flowers of this plant have a bright fiery color. It blooms only in the second or third year after planting..

The fruit looks like a pod, about 20 centimeters long. The seed is flat, up to 12 millimeters long, scattered by the wind. Chinese Kampsis is only able to withstand short-term frosts down to -18 degrees. It is considered more colorful and is used to decorate low objects. Well shaped like a bush. The large-flowered campsis has been cultivated since 1800. On the basis of this species, a new variety Thunberg was bred, which is distinguished by short flowers.. 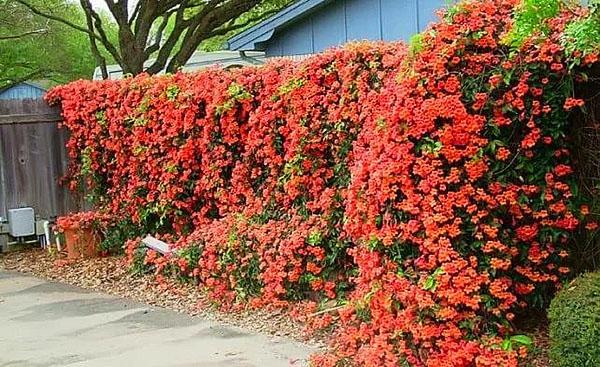 Rooting campsis originated in North America. It is a large liana with aerial roots.

The aerial root is a device that allows the plant to attach to any support and half up.

The leaves are large, long, reaching twenty centimeters in length and colored bright green. The flowers are large, funnel-shaped, bright orange, with a red limb. The number of flowers in inflorescences reaches 15 pieces. The buds open sequentially, one after the other, therefore Tekoma Kampsis (second name) blooms for a long time from the middle of summer.

The fruit is a bivalve pod-like box, 5-13 cm long.The seed is triangular, with rounded corners, covered with a winged peel.

The winged skin allows the seeds to be light and spread intensively in the wind.

It grows very quickly, especially if the soil is moderately moist and rich in nutrients. Withstands short-term frosts at -20 degrees, it is considered photophilous and thermophilic. In addition to seeds, it can multiply by layering and cuttings. No special supports are required. It has been used in culture since 1640, it has decorative forms: 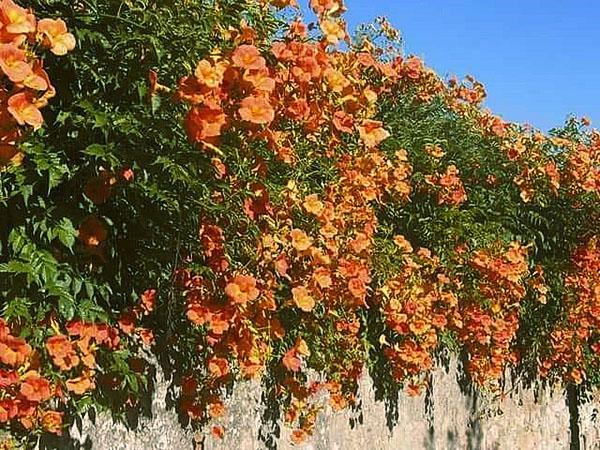 Hybrid Kampsis is a variety that was bred (1833) as a result of crossing two species of Kampsis: large-flowered and rooting. A small, fast-growing plant, barely reaching six meters in height, does not need support. It blooms in late summer, flowers are yellow-orange or orange-red. Loves loose moist loams. Photophilous, but if the climate is warm, it can grow quietly in moderately shaded areas. 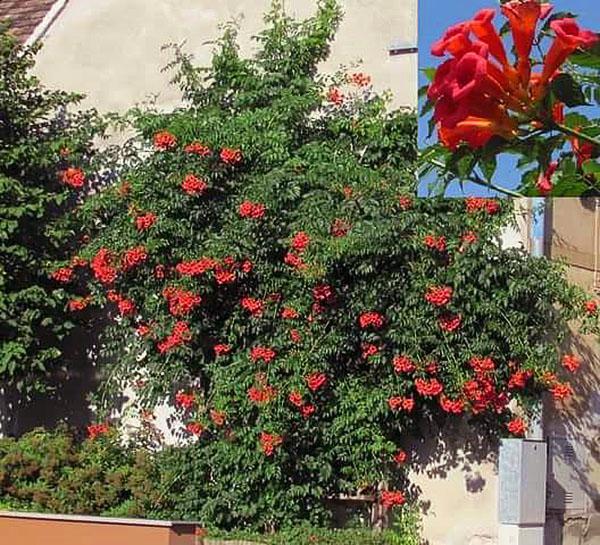 Liana with strong growth. Campsis taking root Flamenco begins to bloom in July and ends in September. It blooms in sheltered, warm and sunny places with moderate humidity. It has aerial roots that help it crawl along the support. Young shoots need tying up. It can freeze in cold winters. It reaches a height of eleven meters. The flowers are red, collected in inflorescences. 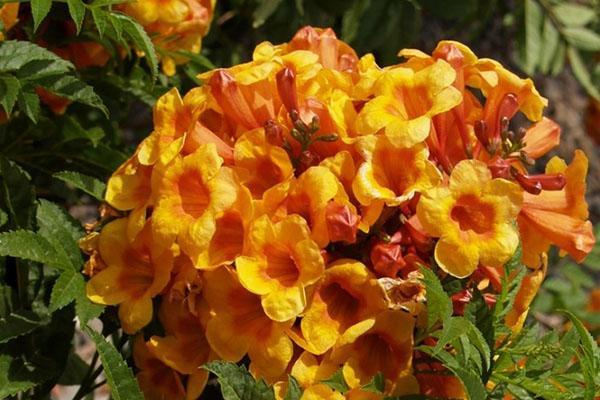 Campsis rooting Judy is grown in the United States of America. It differs from the previous variety in that it has bright yellow flowers with an orange neck. 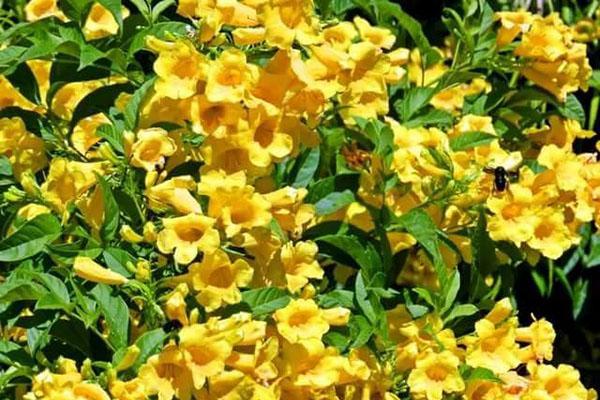 An unpretentious plant that grows on almost any soil. But if the soil is too poor in nutrients or moisture, then it will not grow as abundantly as we would like. It also has another name – Kampsis Flava. Planting is best done with shoots or seedlings, after fertilizing the soil. Flowers do not self-pollinate, so you need to plant nearby plants. Needs pruning, watering and fertilization. Campsis yellow is also resistant to pests and diseases.