Getting to know the types of perennial garden geraniums 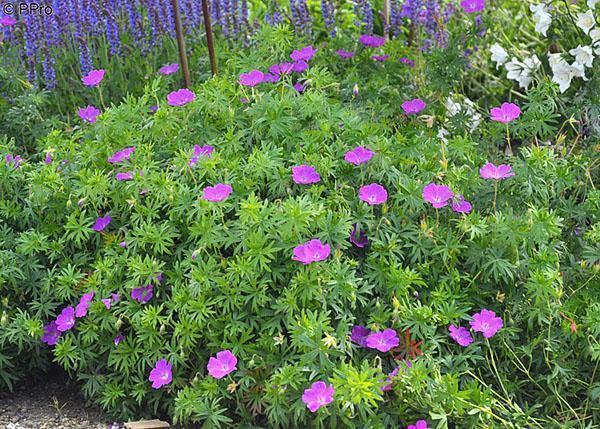 The extensive genus of geraniums includes more than four hundred species that naturally grow in many regions of Europe, Asia and America. The species and varieties of perennial garden geraniums, as in the photo, amaze with a variety of sizes, shapes and colors of foliage, but their flowering, in comparison with indoor varieties, cannot be called lush. The inflorescences consist, at best, of a pair of corollas, and their range is much more modest..

But this does not prevent flower growers from giving their whole souls to garden geraniums. What is the beauty of these plants, and what types of geraniums are most interesting for owners of gardens and backyard plots? 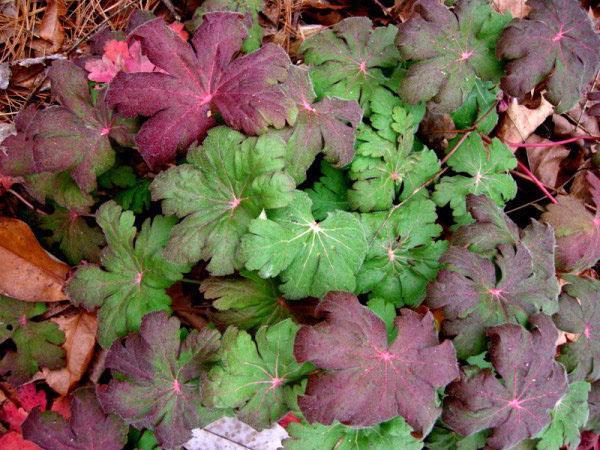 Among the decorative cultures, geraniums are famous for their stability and unpretentiousness. If you correctly consider the selection of varieties and types of geraniums, then the delicate unpretentious bushes remain attractive in a variety of conditions. Of the dozens of cultivated species, there will definitely be plants that feel great on a sunny lawn or under the shade of trees, by a reservoir, on an alpine slide or by a park path..

In addition to flowering, varieties of perennial garden geranium, as in the photo, delight with pubescent curly foliage, which in autumn days begins to sparkle with all the colors of the rainbow. 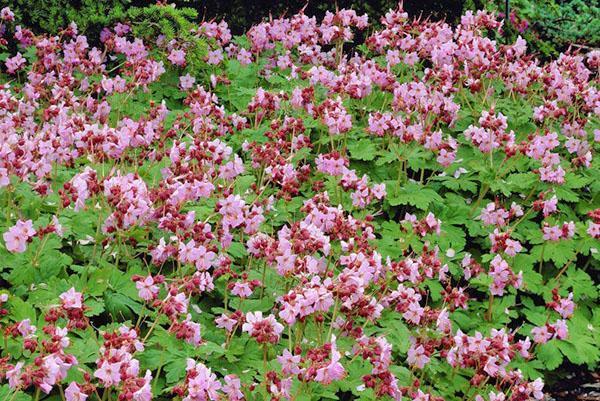 The history of domesticating this type of garden geranium began in the 17th century. Plants naturally occurring in the mountains of Europe have found application in the design of park plantings. And today, perennial large-rhizome geranium is an unpretentious species for a garden, flower beds and borders.. 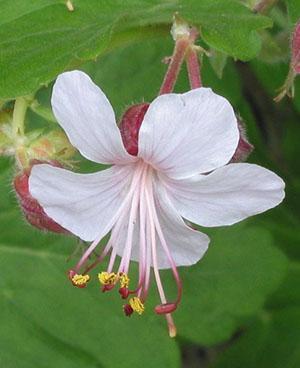 The species stands out for its long, powerful superficial rhizome, which gives rise to new plants. As a result, geranium grows rapidly and forms dense clumps..

Five or seven-fingered leaves 6–10 cm in diameter are intricately serrated along the edge. They have a bright green color and noticeable pile. Flowers up to 3 cm in diameter are collected in sparse umbrella-shaped inflorescences.

The color of the corollas is predominantly reddish, crimson or purple, but there are also white-colored varieties. Blooming large-rhizome geranium begins in early summer and lasts about a month. 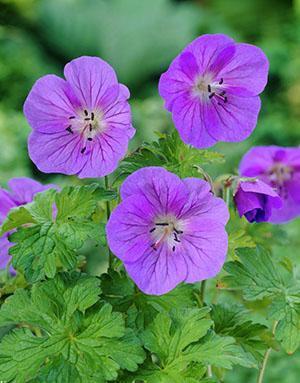 In nature, the plant is found in the foothills of the Himalayas. This meadow culture found application in cultivated plantings in the second half of the 19th century..

The Himalayan geranium forms a dense herbaceous bush with a height of 30 to 60 cm. This species has large five-toed leaves with a diameter of about 10 centimeters. Petioles and leaf plates are strongly pubescent. The flowers, in comparison with other varieties of garden geraniums, are quite large. Corollas, located in pairs on the peduncles, reach a size of 4 centimeters. This feature determined the second name of the garden geranium species – large-flowered.

The color of the flowers is predominantly bluish or purple. Against this background, contrasting purple streaks are clearly visible. Flowering begins in the second half of May and lasts all summer. 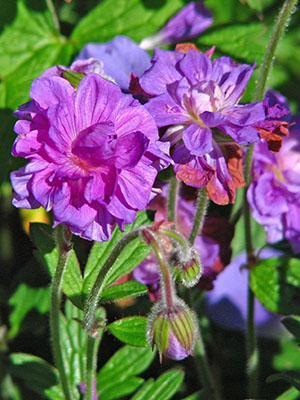 Today, numerous cultivars of the Himalayan geranium have been obtained, there are also compact dwarf forms, not exceeding 30 cm in height.

The Himalayan geranium variety Plenum with double delicate flowers is especially famous. The duration and intensity of flowering can be maintained by regularly cutting off wilted inflorescences.

The geranium species familiar to the European part of the country, the Caucasus and many regions of Western Europe has been grown in gardens since the distant 16th century.. 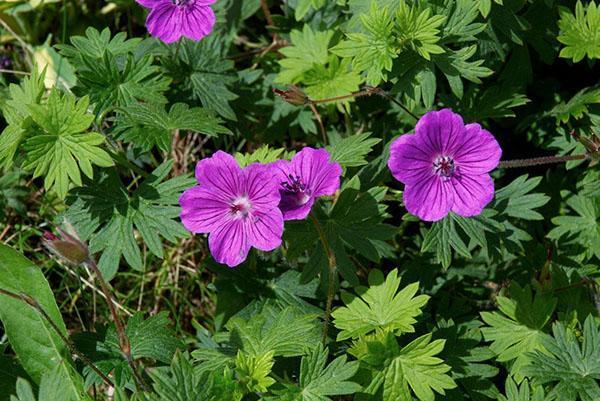 The plant owes its name to wintering five-toed leaves, which turn purple or brick-red in autumn, which gives additional attractiveness to the bright 60-centimeter bushes of this type of garden geranium. 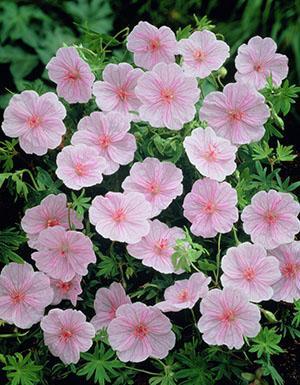 Peduncles with red flowers are not much higher than the pubescent foliage, so it seems that the plants are strewn with flowers. Red geraniums do well in midland gardens. It blooms throughout the summer period, forms many seeds that easily self-sow. Young plants begin to bloom the next year after the emergence of shoots and without transplanting in one place they live up to 15 years.

For the decoration of borders, the most interesting geranium is the blood-red striatum variation, which does not exceed 15 cm in height, blooms profusely and pleases with decorative foliage in autumn. 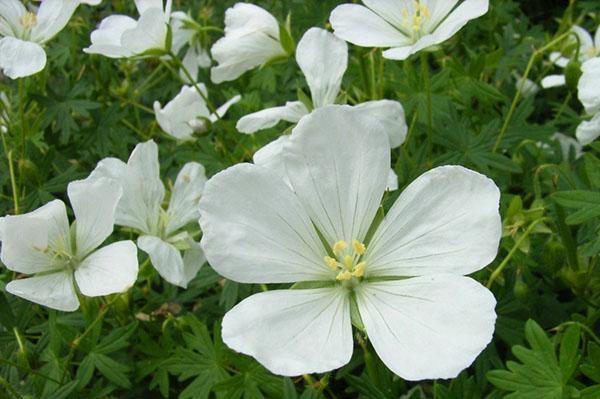 The Album variety shown in the photo of the garden geranium stands out with large white flowers and delicate foliage, which turns bright yellow by autumn. 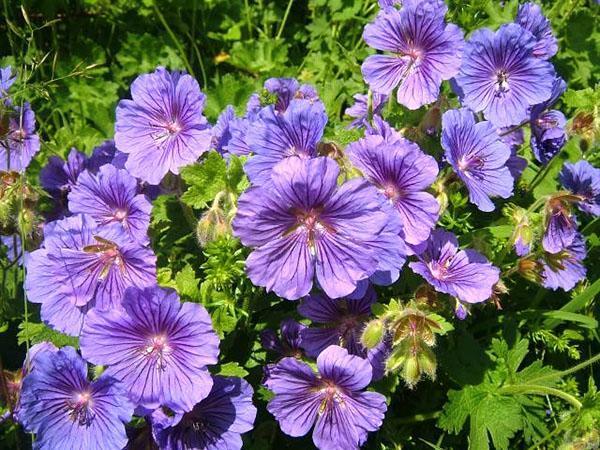 The most beautiful hybrid species of garden geranium, which was the result of crossing the Georgian and flat-leafed varieties. For more than a hundred years, this perennial geranium has served as a decoration for sunny lawns, flower beds and other places..

It is simply impossible not to notice the bush, as in the photo, geraniums with a magnificent height of up to 50 cm. Already from the beginning of summer, the culture begins to bloom, and the bush is covered with purple flowers, surrounded by pubescent five-toed foliage. In autumn days, the bush does not lose its decorative appearance thanks to the same leaves that turn yellow, orange, wine-red.

The hybrid species of geranium does not produce seeds, therefore, plants can only be propagated vegetatively.. 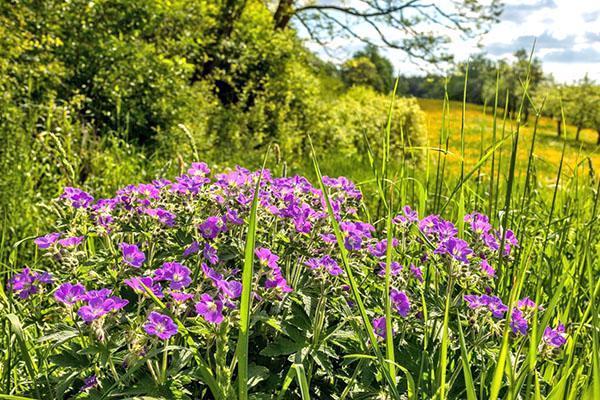 An indigenous plant of the middle zone, found in Europe and in the Asian part of Russia. Forest geranium is a rather large species that forms herbaceous bushes up to 80 cm high.

Seven-fingered densely pubescent leaves are kept on tall erect petioles. By the end of August, they wither, so it is better to plant forest geraniums surrounded by other plants. The flowers open in pairs, have a violet or lilac color, and as they bloom, the shade of the corollas changes noticeably. Flowering, compared to other types of garden geraniums, is short-lived and lasts only three weeks. 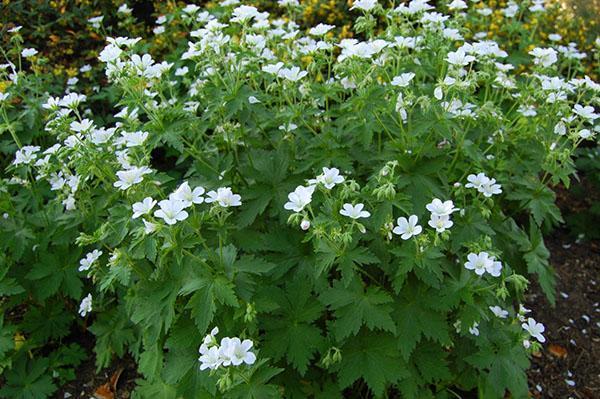 White-flowered forest geranium of Album variety will decorate the shady corners of the garden due to its long lush flowering and the highest decorative effect.. 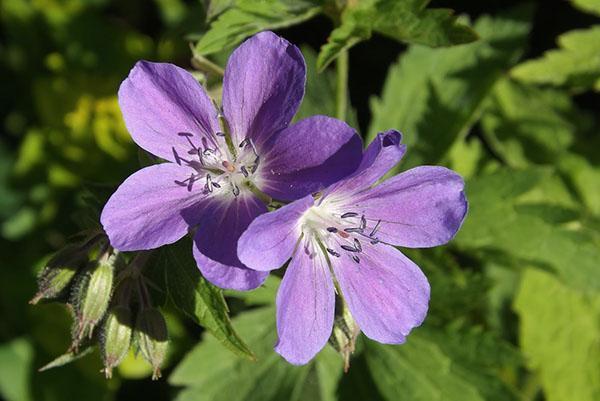 The well-known variety of forest geranium Mayflower pleases the grower with bluish flowers with a slight lilac shade. The core of the flower is lighter than the edges of the corolla. Flowering is very long, from May to August, and abundant. 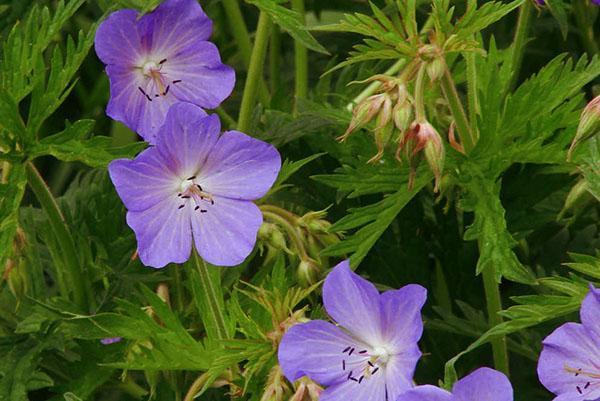 A plant of the 16th century habitual for Europe and most of the Asian part of Russia is used in landscaping gardens and parks..

Meadow geranium is a tall species, reaching a height of 120 centimeters. Peduncles are slightly higher than the pubescent seven-fingered carved leaves. The plant’s decorative effect is maintained from April, when the first foliage appears, and until August, when the bushes wither. Meadow geranium bloom lasts about a month and falls on the peak of summer. 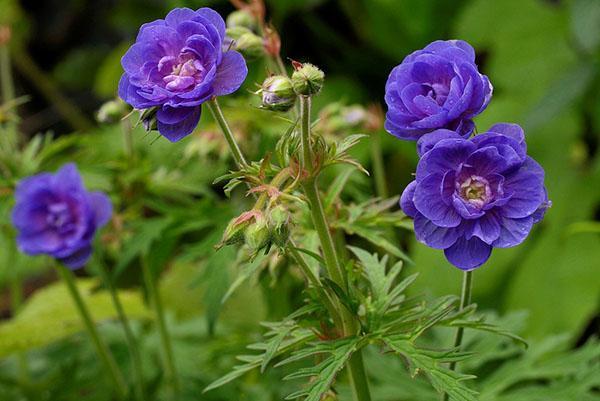 Meadow geranium over the years of cultivation in gardens has become a truly vibrant decorative crop. For example, the variety of perennial garden geranium Flore Pleno shown in the photo with spectacular semi-double flowers of a beautiful blue-blue tone. 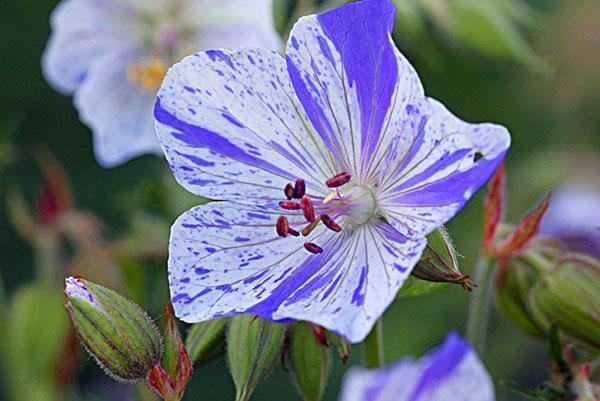 In addition to varieties of meadow geranium with an even color of petals, there are plants with variegated corollas. An example is Splish Splash, which has variegated blue and white petals.. 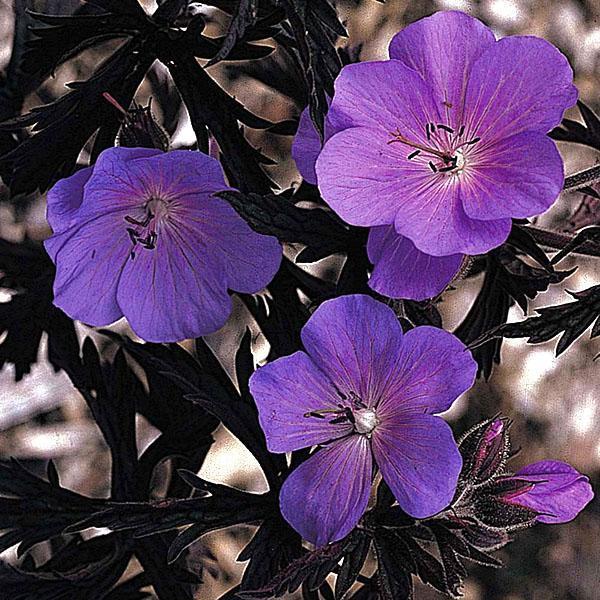 Purple Haze, the so-called variety of perennial garden geranium, the photo of which strikes with pink-lilac flowers and dark purple-purple carved foliage.

Interesting facts from the history of geranium – video